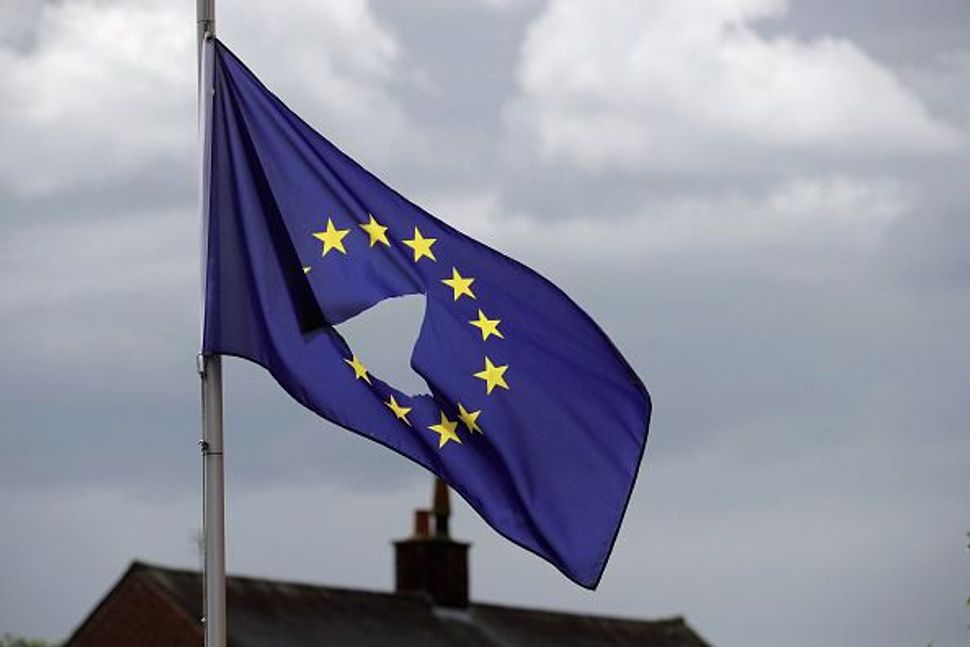 A European Union flag flies with a hole in the middle. Image by Getty

Following the June referendum, in which Britain voted to leave the European Union, applications for German citizenship have soared.

At least 100 families or individuals have applied to be naturalized under a law that grants citizenship to descendants of those who lost their citizenship in Nazi Germany due to “political, racist, or religious reasons,” an official at the Germany embassy in London told the New York Times. It was not clear what percentage of those applications would be approved.

Most of those stripped of German citizenship during World War II were Jews, although other minority groups and political dissidents were also affected.

Applications under this provision usually total 20 a year, the embassy official told the New York Times.

The interest among British Jews in applying for German citizenship is at an all-time high, said Michael Newman, the chief executive of the Association of Jewish Refugees.

In his organization’s 75-year-long history Newman does not recall hearing of requests for German citizenship. But now he too is considering it.

“It’s taken Brexit to do this. It was a game-changer,” Newman said, according to the New York Times.

Those pursuing German citizenship do it for a variety of reasons. Some see it as an act of protest against Nazi Germany’s mistreatment of Jews.

“My reaction became — I want to spite the Nazis,” said Philip Levine, whose grandparents left Germany for Britain in 1939. Learning more about his grandparents’ history motivated him to apply for German citizenship.

For others it is an act of convenience.

“Britain took in my family at a time of trauma, and I’m grateful for that. But taking German citizenship is not about saying ‘goodbye’ to Britain, but ‘hello’ to Europe,” said Thomas Harding, according to the Telegraph.