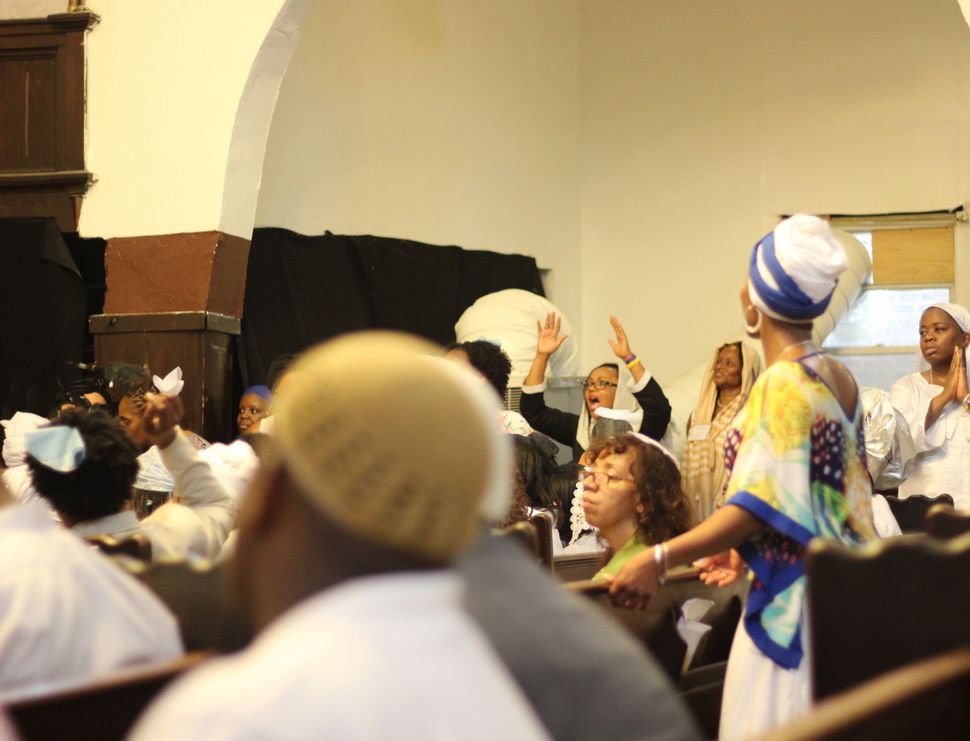 On a recent Saturday in Brooklyn, hundreds of Hebrew Israelites assembled to hear their leader speak. Rabbi Capers C. Funnye was to be formally inaugurated as chief rabbi — and to lay out his historic vision for the movement.

Funnye took the stage amid waves of praise music, sung in Hebrew and English and accompanied by a troupe of drummers from the synagogue.

Funnye, who holds a Hebrew Israelite ordination but has also gone through a Conservative conversion, straddles the mainstream Jewish world and the separate world of the Israelites.

He has been on a decades-long mission to unify the century-old Hebrew Israelite movement, long considered marginal or heterodox by mainstream Jewish organizations. Now inaugurated as chief rabbi of the International Israelite Board of Rabbis, the main rabbinical body of the movement, he has put forward his vision for change.

It remains to be seen how the board will implement its changes, and whether the broader Hebrew Israelite world will embrace Funnye’s new direction. But many are optimistic; fliers for the event called it “A New Era of Cooperation.” 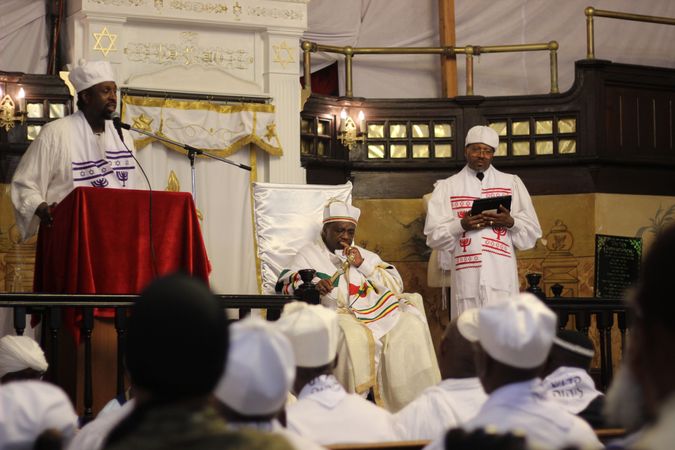 In one of the most important speeches of his career, Funnye asked the Israelites to reach out to other Jews; embrace the inclusion of female rabbis; develop their own Halacha, or set of religious laws, and support the State of Israel.

“We must be staunch supporters of the State of Israel,” Funnye said. And he spoke out strongly against boycott, divestment and sanctions saying, “Israelites must be up and out against the worldwide movement to delegitimize the State of Israel through the BDS movement.”

Hebrew Israelites are people of color, largely African American, who proclaim ancient ancestral connections to the Israelites of the Bible. Hebrew Israelites are diverse in their own right, and practices vary: Some read only the Torah; others revere both the Talmud and the Torah. And while some individuals cleave more closely to Ashkenazi- or Sephardic-infused liturgy, others have carved out a more Afrocentric practice. Some Israelites can move fluidly between Israelite congregations and other Jewish denominations, identifying also as Jewish; others move only in Israelite spaces.

In the early years, these groups were commonly called Black Jews. Beginning in the 1960s, the term Hebrew Israelite was ushered in by a younger generation, in an effort to further distinguish their practice from European Judaism.

The International Israelite Board of Rabbis, which Funnye helms, represents one of the major mainstreams of the Hebrew Israelites. It was founded in 1970 to represent a stream of Israelites that study historic rabbinical literature and also assert African roots.

Still, there are many grassroots congregations nationwide, sometimes called “camps,” that are independent of the board, and may resist rabbinical authority.

The board claims official affiliation with only a dozen congregations nationwide, but commands attention beyond its official membership because of high-profile annual events, an active online presence and its historic link to a patriarch of the century-old Hebrew Israelite movement, Rabbi Wentworth Arthur Matthew.

Seemingly in recognition of the diversity and independence of the Israelites he hopes to serve, Funnye also announced the establishment of a “Council of Elders,” consisting of 14 men and women, venerated leaders from both board congregations and independent camps, who will act as his aides and as representatives for the grassroots.

In another bold statement, Funnye told the crowd that the historically male-only Israelite board must “open the gates and doors to include women in the membership of the Israelite Board of Rabbis.” 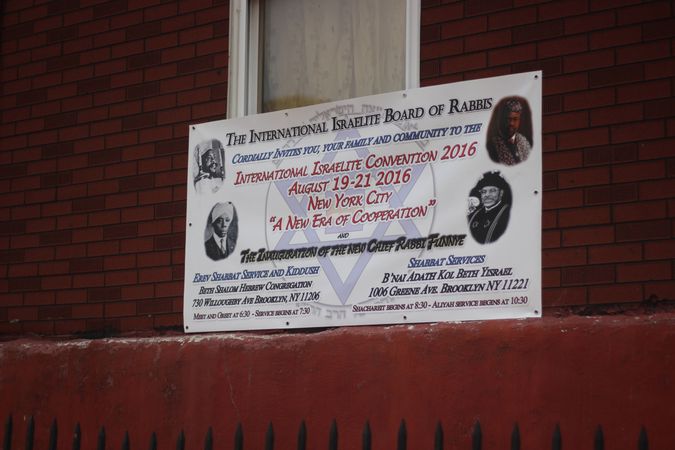 Legacy: An advertisement for the convention and inauguration pictures Hebrew Israelite patriarchs alongside Rabbi Funnye. Image by Sam Kestenbaum

The Israelite board was formed by a group of Matthew’s students, in part in response to the movement’s rejection by mainstream Jewish rabbinical bodies. An affiliated rabbinical school was organized around the same time. Neither the school nor the board has included women since its formation, reflecting the traditionalist gender roles from the early Israelite synagogues.

Funnye also mentioned a long-discussed topic among Hebrew Israelites — the establishment of “official” customs and laws for a diverse and still relatively young movement.

“It is necessary for us as Israelites to establish a Halacha for our community,” Funnye said. “For us, Halacha is the concept of laws as guiding principles for everyday living, or as we say, ‘for our way of life.’”

In the hours after the inauguration, many Israelites celebrated.

“My heart is bursting out my chest right now,” Chazan Nathaniel Yehudah said. “To see all of these Israelites and Jews coming together again, in this time and age, is like something I never thought I would be a part of.”

“It was like a transformation of a people lost in history,” another community member, Robert Azriel Devine, wrote on Facebook that night. “All hail to Chief Rabbi Capers C. Funnye! His words this day roared with a vow that we must stand with Israel! He roared that women will be allowed to serve G-D in a mighty way! All who heard the roar of the Lion of Judah this day has heard the words of a Leader in whom we all can place our trust.” 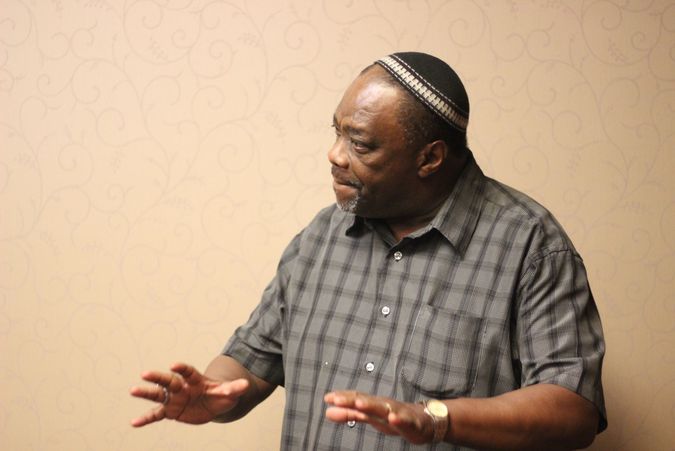 The Chief: Rabbi Capers Funnye has fashioned himself a bridge-builder over the course of his rabbinic career — straddling Israelite and Jewish worlds. Image by Sam Kestenbaum

Funnye’s famous cousin, First Lady Michelle Obama, even sent her congratulations, penning a note on White House stationery. “By bringing people tougher from across the globe and advancing Jewish values,” she wrote, “he will help build a future of greater peace, compassion, and love.”

Some of the changes Funnye hopes to bring to the board are likely to be welcomed. Female leaders have risen to prominence in recent years. Among others, Rabbi Debra Bowen helms a popular synagogue in Philadelphia called Congregation Temple Beth El, which came into the Hebrew Israelite community en masse decades ago.

When it comes to women’s issues, the board may be somewhat behind the trend in the Israelite world, said Andre Key, a professor of African-American studies at Claflin University and the author of “Toward a Typology of Black Hebrew Thought and Practice.” Funnye’s interaction with Reform and Conservative branches of Judaism also probably played a role in his embracing the idea of women rabbis, Key said.

Some also cleave to a more prophetic vision of how and when they, as Israelites, should go to the land. “Some hold the idea that God himself is going to intervene in the history of Israelites,” Key said, “and by some way make it possible for them to return to the Land of Israel.” 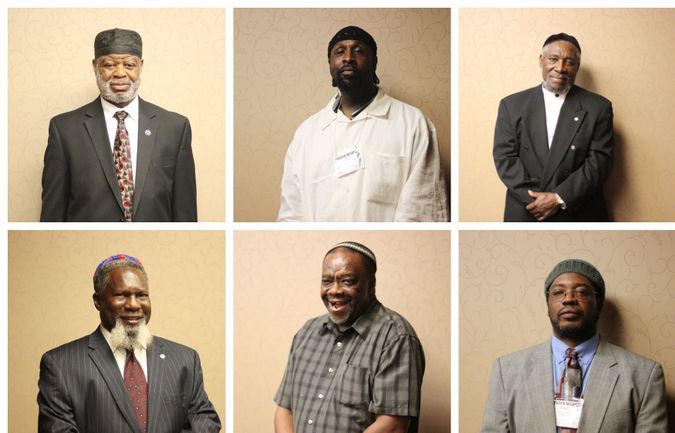 The chief rabbi’s inauguration, part of a weekend-long “Israelite Convention,” was also an opportunity to show the broad coalition of support that Funnye has built among Jews from Africa and from mainstream American institutions.

Rabbi Gershom Sizomu, Ugandan Parliament member and religious leader of the Abayudaya Jews, flew in for the event; there was also a Jewish Ethiopian delegation. And in a notable showing of mainstream Jewish support, Rabbi Gideon Sloush, an Orthodox pulpit rabbi and president of the ecumenical New York Board of Rabbis, came to honor the new chief rabbi, and said he was moved by hearing Funnye speak.

It was a first. Decades ago, the New York Board had turned down an application from Matthew because it did not recognize his non-mainstream ordination.

“None of this could have been done without [Funnye’s] work,” said Rabbi Sholomo Ben Levy, president of the Israelite board. “He’s cultivated those relationships. This is why it’s important to have a chief rabbi.”

Funnye was raised in the African Methodist Episcopal Church — and even considered entering the clergy — but, like other black nationalists of his generation, he ultimately became dissatisfied with Christianity, seeing it as a foreign religion and a white imposition. Born in South Carolina, he was raised on Chicago’s South Side and came in contact with the myriad Hebrew Israelite camps that had begun flourishing in that city in the 1960s and 1970s. 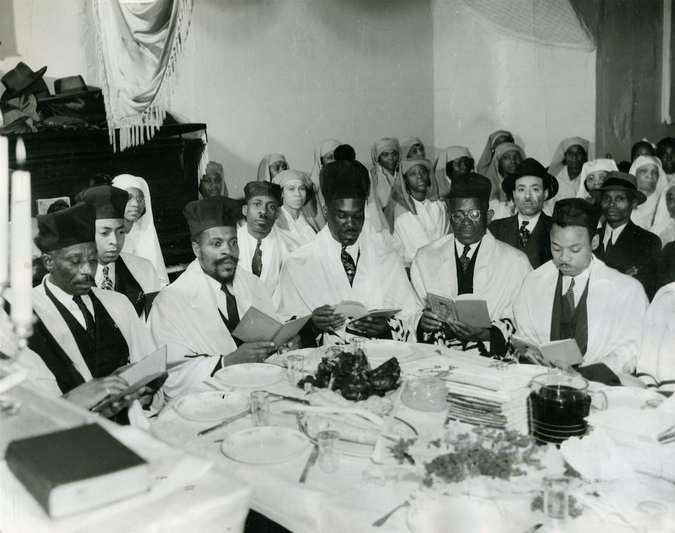 A Passover seder of the Commandment Keepers in the mid-20th century. Hatzaad Harishon reached out to similar Israelite groups in New York in the 1960s. Image by The Forward

He eventually connected with the New York-based Israelite community and studied with the former chief rabbi of the board, Rabbi Levi Ben Levy. Funnye enrolled, studied remotely and in 1985 earned his ordination.

Already possessing Israelite bona fides, Funnye ventured at the same time into the mainstream Jewish world. He received a bachelor’s and a master’s degree from Chicago’s Spertus Institute for Jewish Learning and Leadership. Spertus opened doors for Funnye in mainstream circles; he recalled meeting dozens of Jewish figures, including Louis Jacobs and Elie Wiesel.

Funnye also went through a religious conversion in a Conservative beit din, or rabbinical court, a move rarely taken an Israelite leader. But he said it did not take away from his Israelite identity and ancestry. “I am a Hebrew, I am an Israelite, I am a Jew,” Funnye said in an earlier interview. 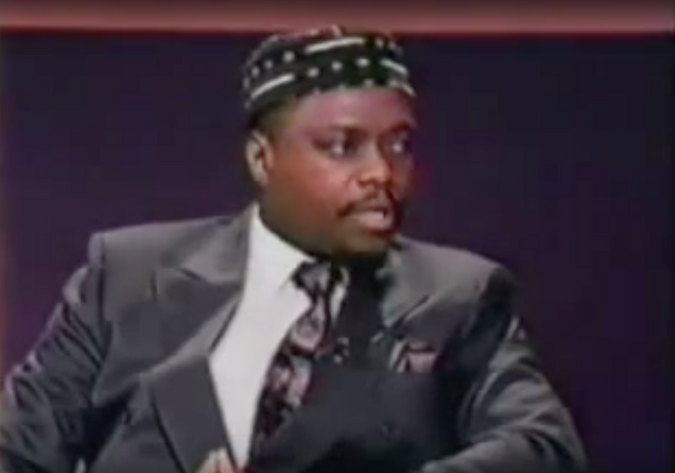 Credentials: Rabbi Funnye, in the 1990s, speaks on a television program about African American Jews and black-Jewish relations. Image by YouTube, youtube/abc

And then Funnye applied and was accepted onto Chicago’s Board of Rabbis, a first for any Israelite rabbi, and a sign of recognition denied an earlier generation.

“When my predecessors asked to be part of the Jewish community they were rejected, reviled, ridiculed,” Funnye said. “I made it my mission to tear down the walls that kept us out.”

At the same time, he has sought not to become severed from his roots in the Israelite movement. He regularly affirms what he says are the African roots of Judaism. “Judaism has its genesis, its birth, in Africa,” he said. “Moses is born in Africa.”

On the Friday evening before his inauguration, Funnye pointed to a ring on his middle finger decorated with the colors of the Ethiopian flag, which he said carries special meaning for him and for other Israelites.

“This represents an unconquered spirit,” he said. “And the antiquity of Jewishness among people of African descent.” 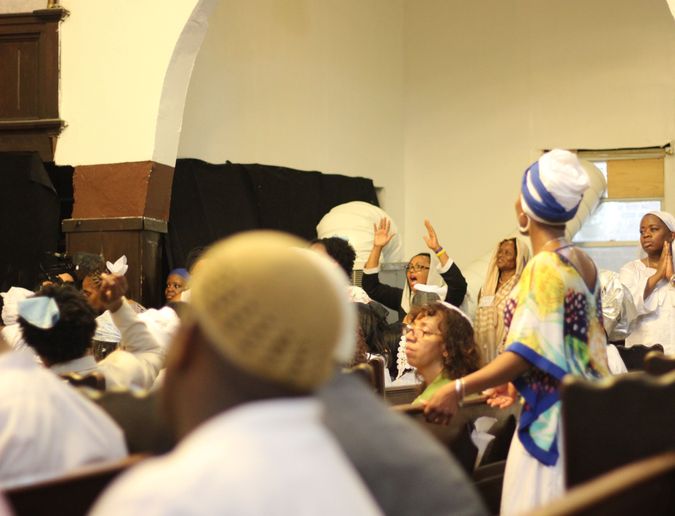 On the Sunday after the inauguration, rabbis from the rabbinical board, including Funnye, appeared on a radio broadcast for the station WBLS, in New York City.

It was a Caribbean program, and opened with “The Israelites,” the reggae song by Desmond Dekker. After the music, Funnye and his rabbinic colleagues ran through their doctrine and beliefs for listeners.

The DJ interjected every so often to turn to his listeners. “I wish this was television so you could see the faces of the people, to see the people talking,” he said. “These are dark-skinned black men who look just like you and [me].”

In between songs, rabbis from the board took turns on the microphone, speaking about their synagogues, which Ben Levy, the board’s president called “places for people of color to come in and feel comfortable.”

“When I read the bible I’m not reading a foreign story,” said Ben Levy. “I’m reading about my own people.”