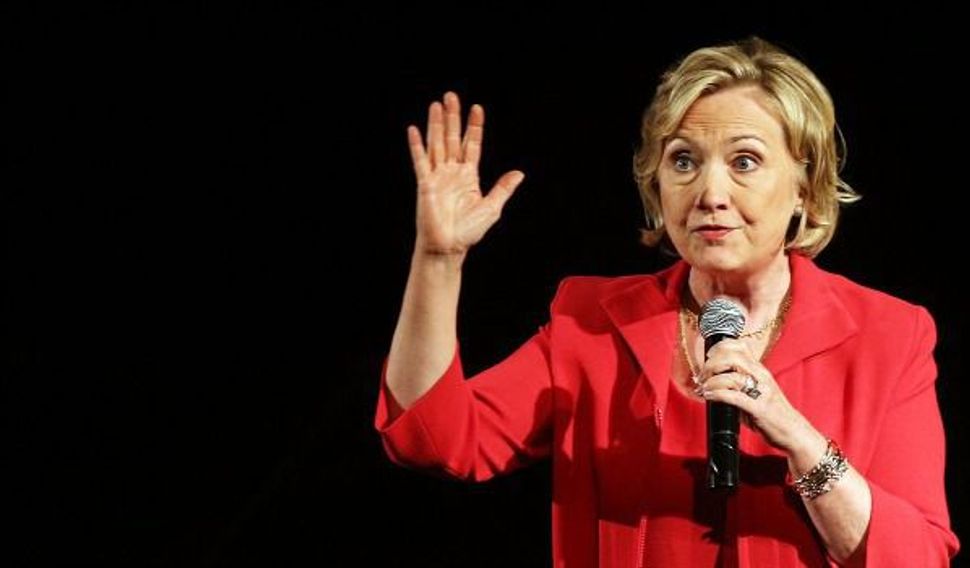 Florida is once again the ultimate swing state prize in the battle for the White House — and a new poll of Jewish voters in the Sunshine State suggests Hillary Clinton has little to worry about come November.

According to a new poll conducted by Democratic pollster Jim Gerstein and published Friday, 66% of Florida Jewish voters say they will vote for Clinton and only 23% for Donald Trump in a four-way vote which includes Green Party and Libertarian candidates.

“Clinton has a commanding lead,” Gerstein said, noting that she is outperforming Barack Obama’s showing in the state among Jewish voters when he ran against Mitt Romney in 2012.

The only Jewish demographic that Clinton is losing are Orthodox Jews who support Trump by a 66% to 22% margin. Orthodox Jews make up only 6% of the Jewish population in Florida. Jews, in general, account for 4%-5% of the electorate in Florida.

The poll questioned 500 Florida Jewish voters. The margin of error is 4%.

Because Jews are such a small demographic group, there have been little reliable polling of them in this election cycle. The Florida poll is the first of Jews in a particular state.

Trump’s challenge with Florida Jewish voters is daunting given the strong negative views about him. Some 71% hold an unfavorable view of Trump and three quarters of respondents have “serious concerns” about Trump’s campaign fostering anti-Semitism.

Beyond support numbers, the new poll indicates that Florida Jews are basically just as liberal-leaning as Jews in other parts of the country. They care primarily about the economy, fighting ISIS terrorism and appointing Supreme Court justices. Israel comes in low on the list of concerns of Jewish Florida voters, as does Iran. This data suggests an uphill battle for Republicans as they seek to peel off Jewish voters in the run up to the November elections.

“Jews are progressives and they vote on progressive issues,” said liberal philanthropist Alex Soros who spoke to reporters on a conference call organized by Schlep Lab PAC, the group which commissioned the poll. “You need to talk about strong progressive agenda and I hope that is what the Clinton campaign will do.”

According to the poll, Jewish voters in Florida strongly oppose Trump’s plan to temporarily ban the entry of Muslims to the United States. Some 75% said there should be no such ban, a figure significantly higher than the 59% of Americans in the general population who share this view.

Jews also showed strong support for the nuclear deal with Iran, with 51% expressing favorable views of the deal and 39% opposing it.

For the Democrats behind the new poll, results indicate that there is no need for concern regarding the Jewish vote in the most important of swing states. But Jewish Republicans, looking at the numbers, still find room for optimism:

“This recently released poll of Jewish voters in Florida confirms again that Jews continue to flee the Democrat Party in greater and greater numbers,” said the Republican Jewish Coalition in a statement. The group looked at exit poll numbers that found that Obama got 68% of the Jewish vote in Florida while Clinton is only polling now at 66%. “Four years after President Obama received the lowest amount of support of any Democrat from Jewish voters in decades, Democrats should be panicked to see Hillary Clinton falling even further behind,”  said RJC executive director Matt Brooks.

Clinton leads Trump overall in Florida polls by a 3.3% margin, according to Real Clear Politics. With other swing states like Virginia and Colorado firmly in Clinton’s column, the state is a virtual must win for Trump.