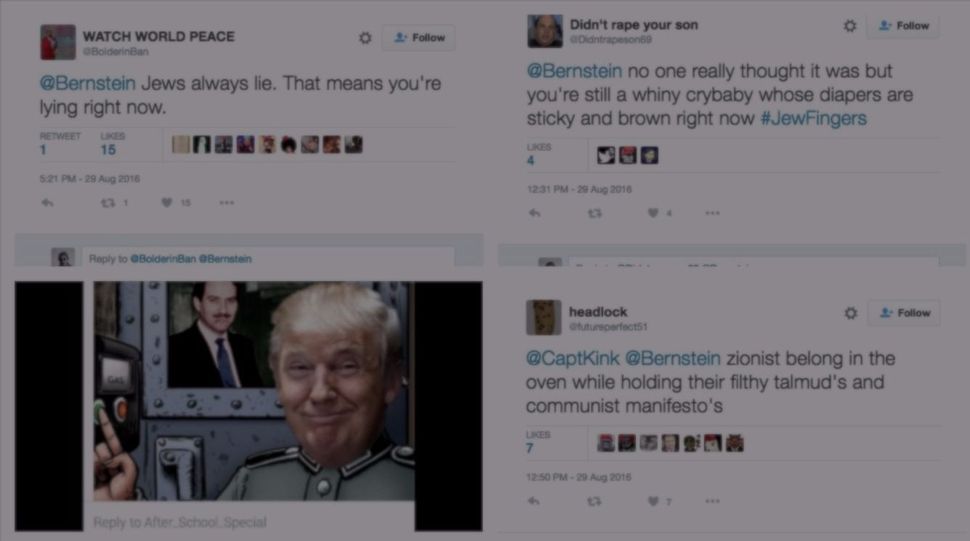 Buzzfeed journalist Joseph Bernstein, whose father was a celebrated United States Justice Department Nazi hunter, is being trolled online for articles he has been writing about the white nationalist movement known as the alt-right.

After a recent article about Sam Hyde, a comedian with ties to the alt-right and a show on Comedy Central’s Adult Swim, Bernstein faced a barrage of anti-Semitic tweets. The most some gruesome was an image of a severed fingers strung on a necklace.

“Can’t wait to meet @Bernstein in person I can finish my necklace made of money-grubbing jew fingers,” the user ‏@WildGooseAbuse, who is apparently a writer for the nationalist website the Ralph Report.

Bernstein, a staff reporter for Buzzfeed who writes frequently about the alt-right, declined to comment.

A video of Bernstein interviewing Sam for his article was posted by the website Ralph Report, in which Hyde says that he “doesn’t do politics” and attributes much of his clearly racist comedy to an assistant who he says manages his social media accounts.

BuzzFeed Hack Bernstein Has Epic Twitter Meltdown Courtesy of Our Own WildGoosehttps://t.co/ekbFsySKvq pic.twitter.com/z9DCNxyvsq

A barrage of tweets against Bernstein followed:

.@twitter: definitely the best social network for getting threatened to have you fingers cut off to add to a necklace of jewish fingers

This, however, is not the first time that Bernstein has come under fire online from users who evoke many of the tropes of the alt-right.

Michael Bernstein, Joseph Bernstein’s father, was a celebrated Nazi hunter for the Justice Department who was killed in the Lockerbie bombing in 1988.

“He was exceedingly thorough. He was meticulous. He understood things,” Neil Sher, director of the Office of Special Investigations that searches out and prosecutes former Nazi war criminals, said after Bernstein’s death. “He would leave no stone unturned. He was compassionate, too. He was one of the best lawyers that ever came through.”

The alt-right noted the younger Bernstein’s family connection online, too — posting an illustrated collage of what appears to be Michael being gassed to death by Donald Trump. “Your dad failed in his mission,” one tweet read, “but sadly you will never complete his mission.” 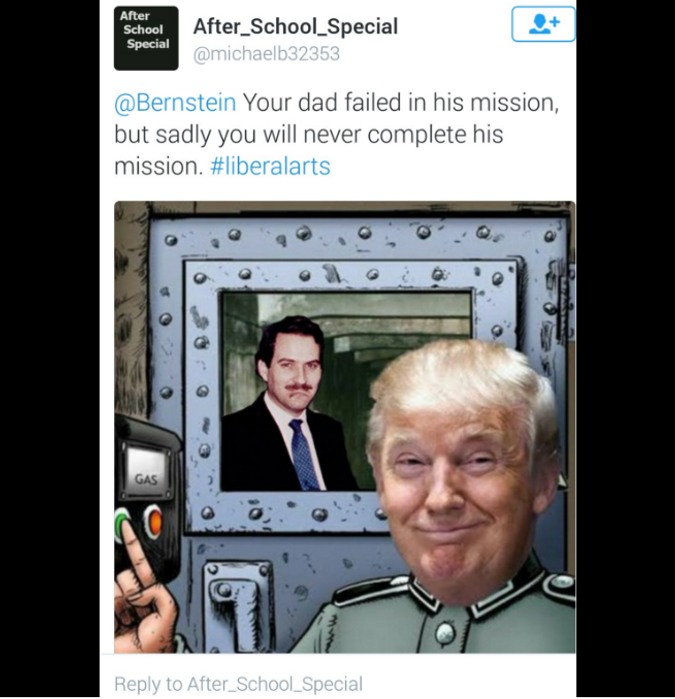