Is the ‘Alt-Right’ Reaching Out to Jews — and Why? 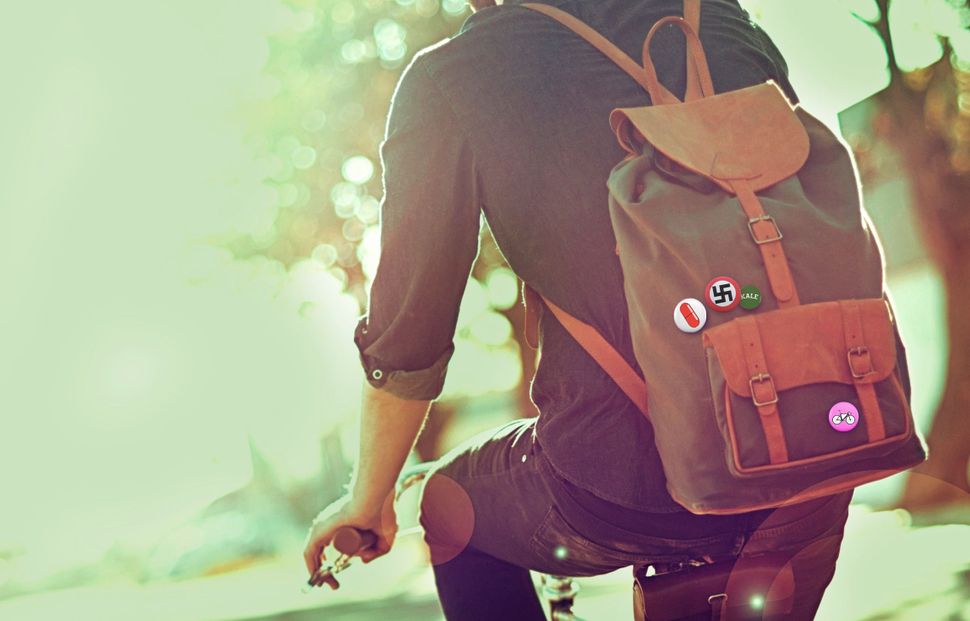 The term “alt-right” is everywhere right now. Donald Trump has been tied to it. Hillary Clinton made a speech about it. On August 25, when Clinton gave her speech, the phrase “altrightmeans” trended on Twitter all day, precisely because most people didn’t know how to complete that sentence. Turns out, the “alt-right” is a loose affiliation of racists and others haters including, but not limited to, white supremacists and anti-Semites.

You’d think such people would not want Jews around.

The so-called “alt-right” is a sophisticated political movement, a far cry from the clumsy, costumed Ku Klux Klan of yesteryear.

The very fact that Clinton had to make such a speech shows how effective they can be, said Peter Montgomery, who monitors right-wing politics at People for the American Way, a progressive advocacy group.

Some of its leaders are even making tactical, token overtures to the groups that white supremacists have hated for so long: Jews, people in the LGBT community and even people of color.

“You have parts of this movement that are rabidly anti-Semitic, fringe-y, Hitlerian,” Montgomery said. “And others are using it to build political power.” Different leaders have different end games, he said. Some, for example, are separatists who want to carve up the United States and assign different groups to different territories. But in the meantime, they are all working to take advantage of Trump’s candidacy. His attacks on political correctness, immigrants and the media have given them permission to build their own organizations.

It is a fractious movement, to be sure. It flows from the offices of Washington think tanks and racist internet forums. But its various groups, publications, websites and conferences have some things in common..

The movement is very media-savvy, and that’s a big strength, said Heidi Beirich, the director of the Intelligence Project at the Southern Poverty Law Center.

“They’re making slick cartoons and videos,” she said. “They’re pushing memes. They’re trolling twitter. They’re doing things these other folks [in politics] know how to do.”

The basic tenets combine white supremacy and white victimhood. In the former category fall bloggers like Steve Sailer, who lends the “alt-right” a pseudoscientific vibe with “human biodiversity,” a benign-sounding neologism that uses the language of genetics to explain perceived racial differences. Likewise, the anti-establishment conservative movement adopted the epithet “cuckservative” to call into question the toughness or strength of any conservative who makes concessions to the left.

At the same time, members and fellow travelers of the movement consider whites to be under attack and even facing extinction in an ongoing “white genocide,” which refers to the supposed conspiracy to destroy the white race through multiculturalism,.

Some leaders see Jewish and other out-group allies as a way to protect whites. Richard Spencer is one of them. The chairman of the innocuously-named National Policy Institute (NPI), a white supremacist think tank begun in 2005, he created Radix Journal, one of the movement’s primary publications, in 2012. Since 2011, the NPI has held multiple conferences in Washington, as well as an aborted conference in Hungary, which resulted in Spencer being banned from 26 European countries, according to Radix.

But before his tenure as chairman of the NPI, Spencer helped run the H. L. Mencken Club, founded by Paul Gottfried, a Jewish academic who coined the term “alternative right.” Its conferences have become a gathering place for white nationalists who, according to the Southern Poverty Law Center, use it to “legitimize racism under the glossy veneer of academia.”

Gottfried and Spencer could not be reached for comment.

“I don’t think directly associating ourselves with movements of the past like Nazism is the best way to go about changing the culture,” Richard Spencer wrote online in an “Ask Me Anything” session, or AMA, on Reddit. “We need to be a new cultural movement … Historical reenactment is not good politics.”

At the October 2015 NPI conference, Spencer made sure that at least one major anti-LGBT voice — Matthew Heimbach — was disinvited, and Jack Donovan, the openly gay “masculinist” writer, was a keynote speaker.

Jared Taylor, another figurehead of the “alt-right,” has been running the racist American Renaissance magazine since 1990, which has published articles by Jewish writers and hosted Jewish speakers at its conferences, drawing the ire of die-hard anti-Semites like former KKK leader David Duke, who is running for U.S. Senate in Louisiana.

Spencer and Taylor say the ends justify the means when explaining the inclusion of Jewish and LGBT voices — and even the voices of so-called alt-righties of color.

“I don’t think it is a good idea to drive away potential allies by declaring war on all Jews,” Taylor wrote in a July 26 Reddit AMA to defend Jewish inclusion in his response to a long anti-Semitic post by the user “Lothar_von_Trotha.” “To be sure, there are many elite Jews who work against the interests of whites, but other Jews see themselves as men of the West who will fight to preserve European civilization.”

“White Jews are white,” he said in a phone interview. Even white Muslims are welcome.

“I suppose if you had a Bosnian European Muslim who had a consciousness as a white person and wanted to defend Western civilization, then yes such a person would be hypothetically welcome in the ‘alt-right.’ But I’ve never met such a person.”

For Taylor, the endgame of the “alt-right” is create an “ethno-state” for people of European heritage.

He feels that this goal has been misrepresented by the media – and that it is a peaceful movement. He said it is a fundamentally different ethos than white supremacy.

“I’m not even sure what white supremacy means,” he said. “If it means anything it means whites are supposed to be ruling over other races. I don’t think anyone in the ‘alt-right’ wants that.”

“It’s really the equivalent of the N-word in how you could refer to a white person,” he said of the term ‘white supremacist.’

But though people like Jared Taylor are willing to welcome white people of all background – at least for now – for many in the “alt-right” their hatred of Jews remains stubbornly common.

Anti-Semites like Kevin MacDonald — who has written books about the invention of anti-Semitism by Jews — are still regular guests at NPI conferences. And though he sometimes praises Israel for being an “ethno-state,” Spencer harbors deep anti-Semitism as well. He tends to pass it off as an intellectual interest in the racial and cultural distinction of Jews from white people.

“I think someone like Kevin MacDonald, he has covered the question of Jews very carefully,” Jared Taylor said. “I think he is correct on the activity of many elite Jews.”

“Overall I would not say that Jews are welcome in these circles at all,” said Marilyn Mayo, a research fellow for the Anti-Defamation League’s Center on Extremism. “There’s a general anti-Semitism that emanates from the ‘alt-right’ and those kinds of groups.”

Mayo said that the occasional appearance of Jews in this milieu reflects the burgeoning “intellectualism” of the “alt-right” — a move in direct tension to the populism of a leader like David Duke.

“It’s a lot less crude and a lot more intellectual than someone who’s into ‘The Turner Diaries,’” she said, referring to an apocalyptic novel that the ADL called “probably the most widely-read book among far-right extremists.” “It’s kind of like a college kid talking about [Friedrich Nietzche’s] ‘Thus Spoke Zarathustra.’”

At Spencer’s last NPI conference, in October 2015, he estimated that “a third to a half” of the attendants were under thirty. The discounted “Millennial Registration” tickets to the upcoming November 2016 conference are sold out, according to the form on NPIevents.com

Breitbart, the conservative news organization accused of providing a more centrist incubator for far-right conspiracy theories and ideas, likes to refer to Europe’s ultranationalist Generation Identity, as the “hipster-right.”

And that’s where Jews and other groups with their own identities come in handy. The “alt-right” white supremacists, unlike European movements like Generation Identity, aren’t so interested in reducing whiteness to distinct European heritages or ethnicities. Many of the American figureheads assume a broader view of us-versus-them — an updated version of Duke’s “sacred white gene pool.”

“Dissident whites benefit from the efforts of all — Jew or gentile — who understand the crisis we face,” Taylor wrote in his Reddit AMA. “Anyone who tries to chase Jews out of a white consciousness movement is chasing away valuable allies and also raising doubts in the minds of gentiles about the legitimacy of white racial consciousness.”

Is the ‘Alt-Right’ Reaching Out to Jews — and Why?