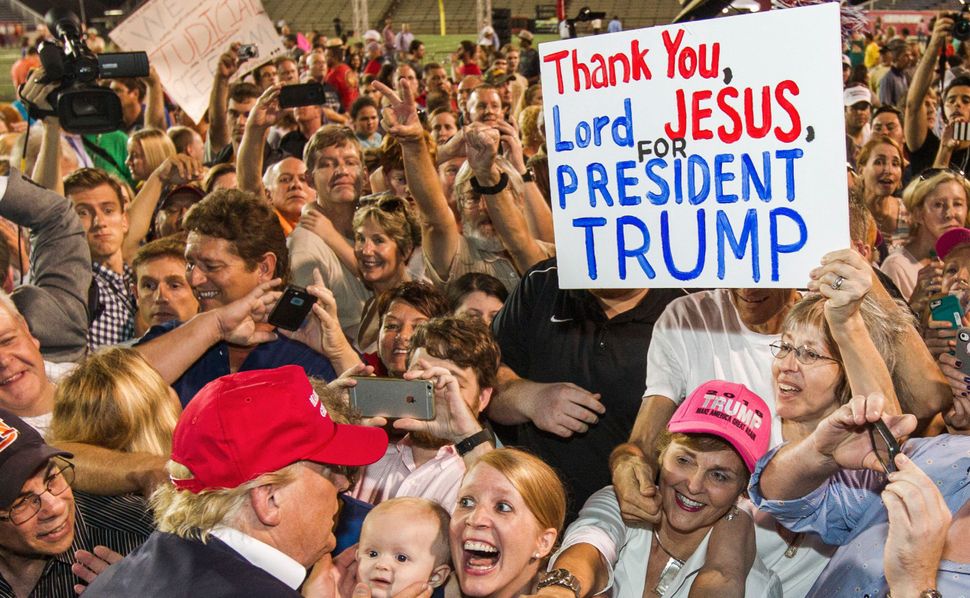 The verdict? He’s bigger than Jesus.

In “Measuring Fame Quantitatively V: Who’s the Most Famous of Them All (Part 2),” Dr. Eric Schulman, an astrophysicist and science humorist, used Google searches and an algorithm to answer that ever-important question.

Trump is, for the moment, approximately 14 times more famous than George Harrison. (More on that later.) Schulman, in back of the envelope calculations sent by email, estimated that from 1985 to 2008 Trump was a B-lister, and before 1985 he was C-list. From the names Schulman included in his analysis, the order of descending fame (based on Google searches) is Trump, Barack Obama, Hillary Clinton and Jesus Christ.

Though Schulman freely admits that it is extremely difficult to make scientific judgments about something as unscientific as fame, he feels that his study is helpful, even if it is playful.

“It’s a little obscure and confusing by design but there is a truth to it,” he told Vocativ. “This is real data and I think it’s providing us with some real insights, especially on how we as an internet society look at things.”

Some other interesting findings from the latest study:

(Full disclosure: based on Schulman’s algorithm, which can’t differentiate among people who have the same name, the collective totality of all “Ari Feldman”s on the internet together constitute an E-list celeb. But I’ll take what I can get.) 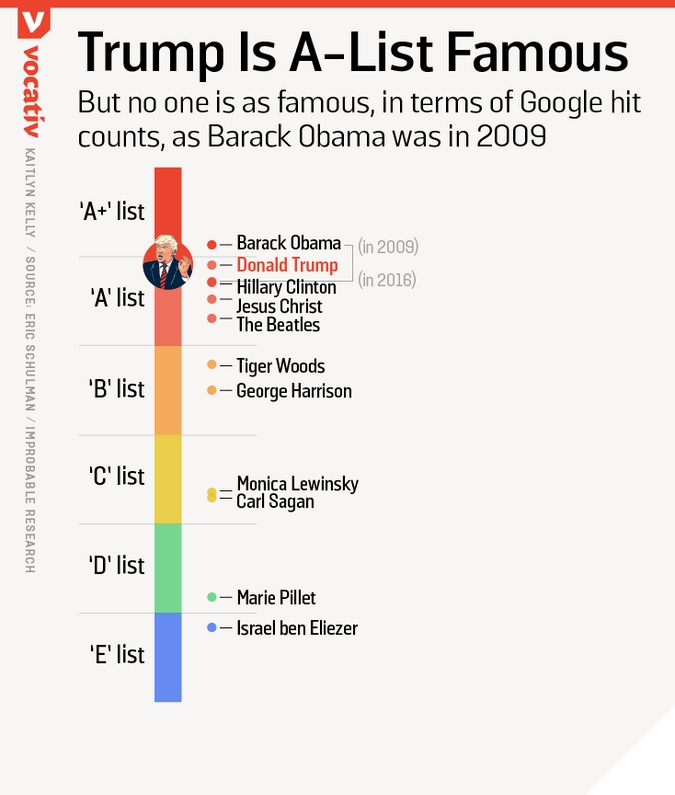 A graphic from Vocativ.com showing Schulman’s results. Image by Vocativ

Schulman set George Harrison as the B-list celebrity off of which all other classes of celebrity — from A to H — would be measured.

“I choose George Harrison as the archetypal ‘B’ List celebrity because his fame was roughly constant over the time period of my 2009 study (2001-2009) and he’s not as famous as John (Lennon) or Paul (McCartney),” Schulman wrote in an email. “I did consider making Ringo the archetype, but as I recall his fame was more variable.”

His metric is “the logarithmic international standard unit of fame,” or the dBHa. (“Ha” is for Harrison.) Depending on how many more (or less) Google search hits a person receives relative to George Harrison, Schulman’s algorithm assigns them a rough spot along the fame continuum. A-list celebrities are between +5 and +15 dBHa; C-listers score -5 dBHa or less.

While the Baal Shem Tov registers as a C-lister, major figures from other world religions did better.

Mohammed, Moses and Buddha made the A-list (though Mohammed was quite close to breaking into A+ list territory) and Brahma made the high range of the B-list.

Schulman said that he decided to include the Baal Shem Tov in his published analysis because he and his wife said one of his proverbs at their wedding.

“As far as I recall, he was the only Jewish mystic whose fame I measured,” he wrote. “Actually, come to think of it, I suppose Jesus counts as a Jewish mystic.”