Milan Chatterjee, the former president of the UCLA Graduate Students Association who’s been ensnared in an explosive controversy over the boycott movement of Israel, said he hadn’t thought too much about Mideast politics until last year.

In fact, he’d hoped to steer clear of it as a student leader.

“This is the first time I’ve been thrust into it,” Chatterjee said. “I’d never taken a stance on [the boycott, divestment and sanctions movement], knowing how tense a topic it is.”

But since last November, Chatterjee has found himself at the center of a familiar pattern of back-and forth between Israeli and Palestinian advocacy groups that plays out on campuses across the country. The uproar caused Chatterjee to leave California and finish up his law degree at New York University — and rethink stepping back into any position of power.

The problem started last year when Chatterjee threatened to deny funding for a student gathering if Palestinian advocacy groups used the event to promote BDS.

Chatterjee said that he had wanted the graduate body to “remain neutral” on the topic. The student body applying for funds agreed to the terms and the event was held. (A pro-BDS group, Students for Justice in Palestine, had a table at the event, which was dedicated to campus diversity.)

But soon afterwards, free speech and Palestinian advocacy groups raised the question of whether Chatterjee’s terms had violated free speech.

An internal UCLA investigation followed and found that Chatterjee “violated viewpoint neutrality in the allocation of student fees.”

Meanwhile, the American Jewish Committee had rallied to Chatterjee’s side, connecting him with high-powered lawyers to provide pro-bono backing. This summer the AJC also awarded Chatterjee their inaugural “Campus Courage Award,” for being a “non-Jewish ally” against BDS.

“Milan’s treatment is emblematic of the nastiness and bullying tactics employed by the BDS movement, which does not discriminate at all in targeting campus leaders who are outspoken in support of Israel, or in Milan’s case merely seeking to be neutral on the topic,” AJC assistant executive director Daniel Elbaum wrote in a statement to the Forward.

Chatterjee described coming under fire from pro-BDS activists on campus who “vilified and harassed” him. A senior Students for Justice in Palestine member, Rahim Kurwa said that no one in his organization had been in contact with Chatterjee “for months” and that outside of raising formal complaints with the school, which resulted in the investigation, they had not “harassed” Chatterjee in anyway.

Finally Chatterjee said that UCLA had “publicly scapegoated” him. In an August 24th letter to UCLA, Chatterjee explained his reasons for leaving the school, calling the campus climate “hostile and unsafe.” 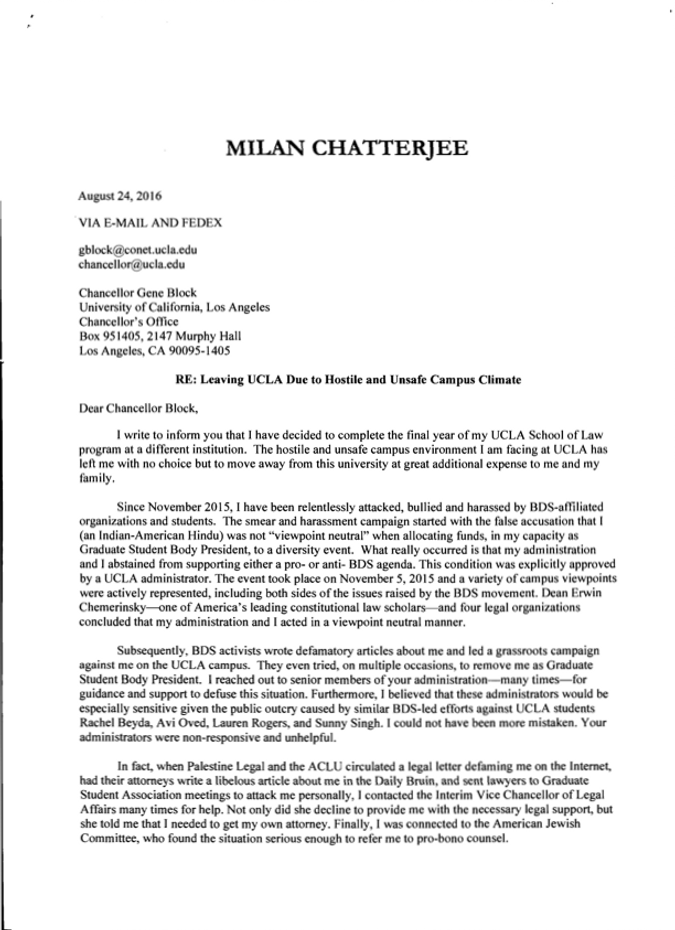 In a statement from a public affairs officer, UCLA said the school was disappointed that Chatterjee was leaving, but “stands by its thorough and impartial investigation, which found that Chatterjee violated the university’s viewpoint neutrality policy.”

Still, all of this contributed to Chatterjee’s decision to finish out his law degree in at New York University, where he hopes he won’t be pulled back into campus politics. He plans transfer his credits to UCLA and receive his degree from the California university.

An Indian American, Chatterjee was raised Hindu in Colorado. He grew up deeply connected to his Indian heritage.

Both of his parents are immigrants and he still speaks Hindi with his mother. He learned to play tabla and even recorded a CD of his music. Chatterjee’s father is a high-powered “finance guy,” whose work has taken him around the world (he’s based in Macau now).

Chatterjee grew up with friends from all religions, including Jews.

“I’ve had a lot of Jewish friends, I’ve gone to Shabbat dinners. I’ve learned about their religion. These are some of the smartest, most hardworking high-cultured people,” Chatterjee said.

Though he’d taken an interest in domestic politics (supporting Mitt Romney) Chatterjee said that he had never done any Israel advocacy work prior to this.

The ordeal has politicized him.

“I can’t be neutral anymore, I can’t support BDS … I don’t now how anyone in their right minds could support the BDS movement,” said Chatterjee.

The BDS movement is modeled on the economic sanctions taken against South Africa during apartheid. But Chatterjee said he struggled to see the parallel. “I think Israeli-Palestine politics are more complicated than that.”

And now, Chatterjee finds himself celebrated by the AJC.

“They recognize I took a principled stand. I’ve gotten numerous gracious messages from Jewish leaders around the world,” he said. “I’m grateful for the outpouring.”