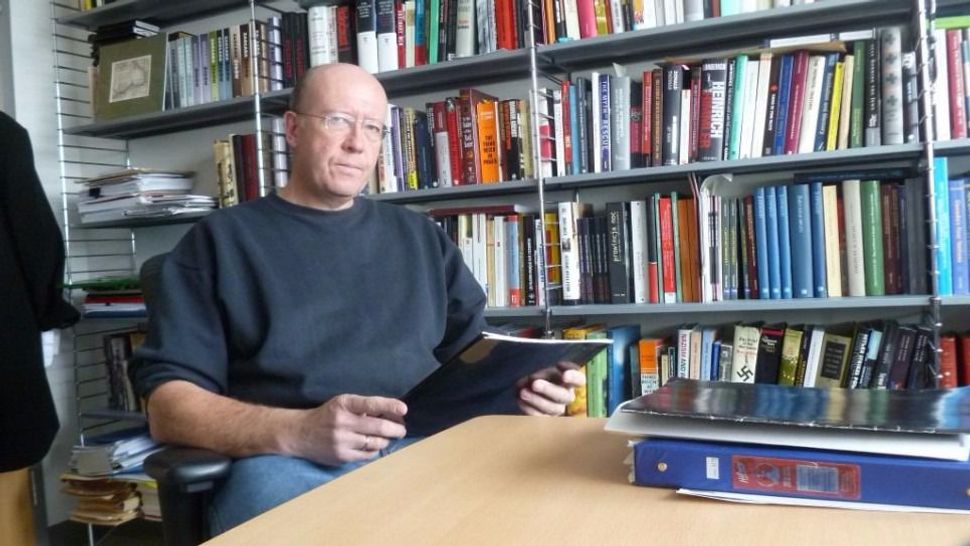 Jan Grabowski, a historian at the University of Ottawa, expects his upcoming book to be controversial in his native Poland. But if a proposed new law is approved by Poland’s parliament this fall, as expected, Grabowski’s book, which examines the role of Poland’s police force in robbing and murdering Jews under the Nazis, may also get him sentenced to prison if he visits the country.

“Young people will now think twice before even studying Jewish-Polish relations” if the legislation is passed, warned Grabowski, who noted that teaching and research jobs are already scarce in Poland, where government-funded universities are the major employer.

The government bill, prepared by the Ministry of Justice, would make it a criminal offense, punishable by up to three years in prison, for anyone to implicate Poland, or the Polish people, in the crimes of the German Third Reich. The bill, which was sent to the Polish Sejm, or parliament, on August 16, is expected to become law when it is voted on in September, because the ruling Law and Justice party, which backs it, holds a large parliamentary majority.

Poland’s far-right government defends this legislation as an effective legal tool in counteracting assertions that Poland and its people have any responsibility for the crimes of the Holocaust. The law is intended to combat what the government calls “lies” that are detrimental to Poland’s image and that the government considers to be found mainly in the “foreign media.”

“It is not our mothers, not our fathers, who are responsible for the crimes of the Holocaust, caused by German and Nazi criminals in occupied [Poland],” Justice Minister Zbigniew Ziobro said at an August 16 press conference. “Our duty is to defend the truth and dignity of the Polish state, and the Polish nation, but also of our fathers, our mothers, our grandfathers.”

Poland’s Ministry of Justice did not respond to questions from the Forward about how the law would work if passed.

Critics, however, fear that the legislation will intimidate journalists and historians into refusing to investigate Polish complicity in the murder of Jews during the German occupation.

This legislation could be devastating for young Polish scholars who have to apply for government grants for research projects, according to Jacek Leociak, head of Holocaust literature research at the Polish Academy of Sciences. “Young scholars will now hesitate if they think of applying for advanced studies on Polish-Jewish relations,” he said in a telephone interview.

Grabowski, who is currently writing his book, “The Role of the Blue Police in the Extermination of the Polish Jews,” was uncertain if the proposed legislation would subject him to legal action. “However, given the current climate and the attitude of this current government, I could not put anything past them,” he said. “Publishing a book like this is exposing yourself to a much higher level of aggression and possible legal action.”

Criticism of the legislation also came from scholars at Yad Vashem, Israel’s internationally recognized museum and research center focused on the history of the Holocaust. “Criticism of historical investigations is a dangerous step,” Dan Michman, head of Yad Vashem’s International Institute for Holocaust Research, said in a telephone interview “It damages the image that Poland has gained since the downfall of communism.”

According to Michman, after the fall of communism in 1989, Poland was the leading nation in Eastern and Central Europe to undergo a period of introspection, and Poland dealt with the past better than other Soviet bloc countries had. Michman viewed the proposed Polish legislation as a backward step more common in the totalitarian communist period.

“Everyone knows there were Poles who took part in the murder of Jews,” Yehuda Bauer, an internationally recognized Israeli Holocaust scholar, told Haaretz on August 24. “To claim otherwise is a denial of the research that has already proved these things, and in my opinion is also Holocaust denial.” Bauer is Yad Vashem’s academic adviser.

A group of Poland’s most prestigious Holocaust historians has condemned recent official efforts to deny or downplay the role of Poles in murdering Jews during and immediately after World War II. The condemnation came from the Polish Center for Holocaust Research, a division of the Polish Academy of Sciences.

The center criticized in particular recent testimony by Jaroslaw Szarek, the government’s newly appointed president of the Institute of National Remembrance. Szarek told a parliamentary committee that it was the Nazis, not Poles, who killed roughly 300 Jews in Jedwabne, in northeastern Poland, in 1941. This directly contradicted a formal 2002 finding by his own institute. In 2011, the Polish government itself formally apologized for the killings, acknowledging that Poles carried out the pogrom.

The current government, however, has signaled its determination to recast Polish history. At a November 17, 2105, conference called by Polish president Andrzej Duda, representatives from Polish museums and other cultural institutions were told to galvanize Polish nationalism and to discard narratives that shamed Poland.