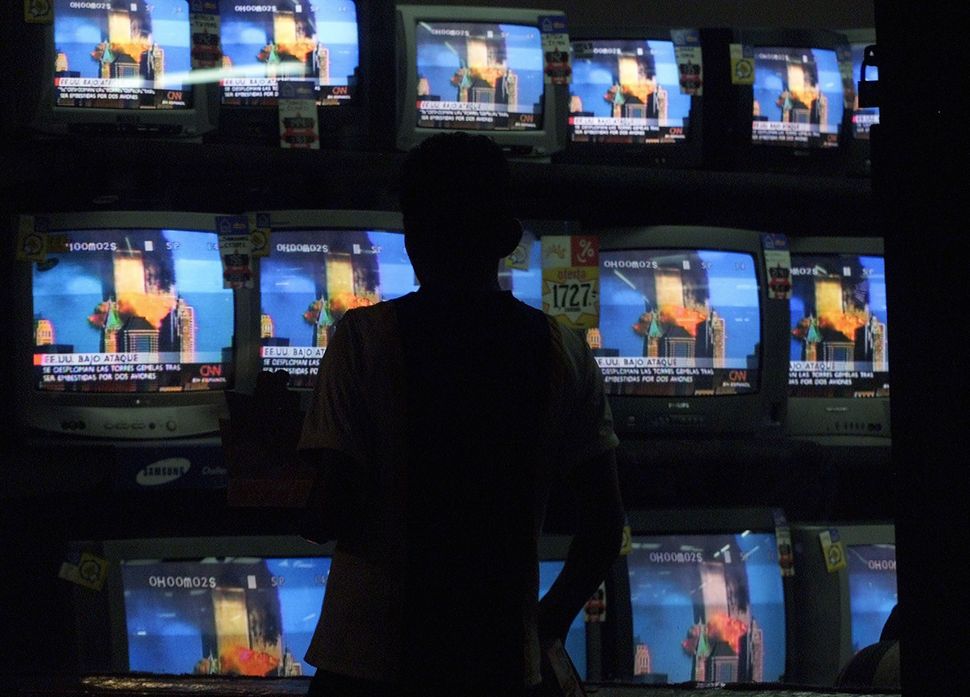 Brooklyn Commons is a neighborhood gathering space. It says its purpose is “movement building,” but the organization dedicated to fostering connection found itself attacked by its own allies days before the 15th anniversary of the 9/11 attacks.

Groups affiliated with the Commons, including Jewish organizations, wanted the space to cancel a scheduled talk by Christopher Bollyn, a speaker who calls the attacks a “monstrous Jewish-Zionist crime.”

“As a progressive community space, the Brooklyn Commons should not provide a platform for anti-Semitism,” said the New York chapter of Jewish Voice for Peace, a group that seeks to end the Israeli occupation of Palestinian lands.

The Commons’s founder, Melissa Ennen, refused to cancel Bollyn’s event, insisting the Commons was not “designed to be a cozy cocoon for intramural debate among leftists.”

Bollyn’s high profile reflects just how entrenched 9/11 conspiracy theories, many of them anti-Semitic, have become 15 years after the attacks. And in the era of Donald Trump, a major party candidate who espouses conspiracy theories and is drawing support from the former Ku Klux Klan member David Duke and his fellow travelers, fringe notions are inching onto more mainstream platforms.

The Anti-Defamation League recognizes Bollyn as a prominent voice in what they describe as an “industry” of anti-government 9/11 conspiracy theories, complete with authors, speakers and mini-celebrities, said Marilyn Mayo, who has researched 9/11 conspiracy tropes for ADL, a Jewish group whose mission is to track and fight anti-Semitism and other forms of bigotry.

Both white supremacists and conspiracy theorists have celebrated Trump’s rise.

“Donald Trump has embraced dozens of conspiracy theories like we’ve never seen in a modern presidential candidate,” said Brian Tashman, a senior research analyst at People for the American Way.

Conspiracy theories that imagine a shadowy government plot behind the attacks date back to the months immediately after those attacks.

The ADL does not try to “disprove” conspiracy theories lest it dignify some of the most outrageous ideas by making the effort to debunk them.

Regardless, they have become “more and more entrenched,” Mayo said. With the 15th anniversary of the attacks fast approaching, people on the “alt-right” will be talking about them, she added, referring to the contemporary white supremacist movement.

These theories claim that “Israel, not Osama bin Laden, was behind the events of 9/11,” ADL wrote in “Unraveling Anti-Semitic 9/11 Conspiracy Theories,” its first comprehensive summary of the tropes, in 2003. Such notions are “contributing to new form of global anti-Semitism,” one that threads together white supremacists, some far-left anti-Zionists and anti-Israel sentiments overseas.

Today, experts analyzing the theories and their spread say that some of the most persistent ones evoke an age-old anti-Semitic trope: The Jews, with their outsize influence and power, must have done it. Call them a 21st-century version of “The Protocols of the Elders of Zion,” which imagine Jews as an evil race and Israel as an evil force, intent on dominating the world.

Many of the latest iterations espouse the notion that 9/11 was a “false flag” operation — a covert operation designed to deceive the public — and part of an ongoing attempt by Israel to wage a war against its Muslim “enemies.”

According to one theory, outlined in a 2011 report by ADL, the Mossad, the state Israeli intelligence agency, orchestrated the attack.

The “proof” offered is the “five dancing Israelis” who, arrested on 9/11, who were allegedly celebrating as the twin towers burned, ADL wrote.

Some proponents today claim that the five Israelis were actually “directing the attacks” and began dancing when they realized that their mission of creating a “false flag operation” had been accomplished, ADL wrote.

Another theory holds that Jewish neoconservatives were behind the attacks. Proponents point to Jewish figures like Paul Wolfowitz, Richard Perle and Douglas Feith, all of whom worked in President George W. Bush’s administration at the time. And a third: “Jewish-controlled media and government work to prevent the truth from emerging,” according to ADL.

More recently, there’s the notion that Israel “created” Al Qaeda and the Islamic State group, and is therefore to blame for the Islamist terrorist groups, Mayo said.

Today’s conspiracy theories are fueled largely by anti-Israel sentiment. These authors reference and reinforce each other’s work and blame Israel for numerous “false flag” operations, not limited to 9/11. 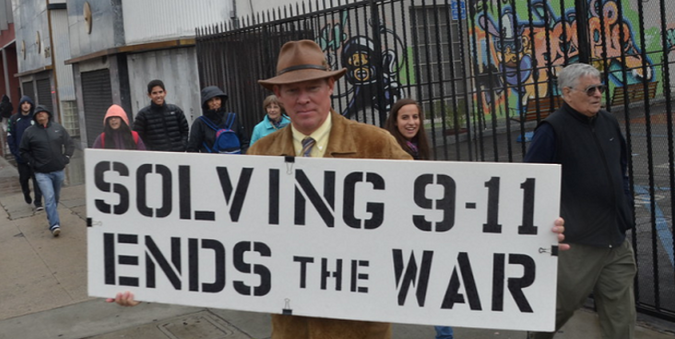 Christopher Bollyn is among a handful of conspiracists who have made careers off of lecturing and writing about 9-11, which Bollyn calls a “Jewish-Zionist crime.” Image by YouTube

Among the key figures in this group, identified by ADL, are Bollyn, who bills himself as an “investigative journalist”; Gordon Duff, who runs the site Veterans Today; Alan Sabrosky, a former U.S. Army War College instructor who writes for Veterans Today, and Kevin Barrett, who has a radio show called “Truth Jihad.”

Trump is also known as an exponent of conspiracy theories, although none is explicitly anti-Semitic. He was among the leading voices pushing a conspiracy theory that President Obama was not born in Hawaii. Trump has also suggested that Obama is a secret Muslim and that vaccines cause autism, climate change is a hoax and “global warming was created for and by the Chinese.”

For the “alt-right,” there is an imagined Jewish establishment that controls world events, challenging “white identity” in America, Tashman said, so that anti-government sentiment can quickly evoke old anti-Semitic tropes.

At Brooklyn Commons amid the Bollyn controversy, Ennen noted that since launching in 2010, the Commons has rented space to Tea Partiers and has hosted speakers who supported wars in Iraq and Afghanistan.

They try, Ennen wrote, to host a variety of viewpoints.

Ennen, who herself was involved in a group investigating “government deception” surrounding the 2001 terrorist attacks, said that while “progressive organizations dominate the calendar, the Commons is available for rental by other groups.”

“Trump and the ‘alt-right’ have elevated conspiracy theories by challenging basic narratives of events,” Tashman said, “opening the door for more people who see the world with this anti-government lens.”