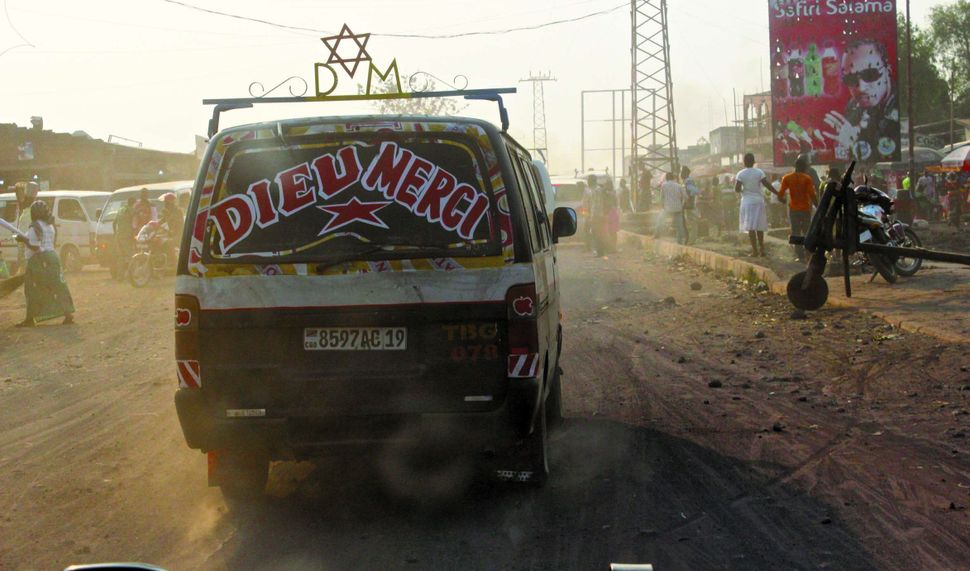 Philosemitic Display: A microbus with a Jewish star on it drives one of Goma’s main streets. Image by miriam berger

Jews, like any minority, have a knack for finding other Jews seemingly anywhere they go. But there’s one country where they may find comfort in unexpected brethren: the Democratic Republic of Congo.

“I’m Jewish, too!” an excited Chideka Emmanuel, 38, told me in July, his welcoming smile appearing, perhaps, a little wider. “Spiritually Jewish,” he clarified. “Spiritually we are from the same father.”

Emmanuel is from Goma, the capital of war-ravaged eastern Congo, where an estimated 95% of Congolese are Christian. But on Sundays at Emmanuel’s Protestant Church, worshippers warmly greet each other with rounds of “Shalom,” and sing and dance alongside decorative six-pointed stars and menorahs. For Emmanuel’s first, and so far only, trip abroad, he saved up for a tour to one place: Israel. Now, a recording of the song “Am Yisrael Chai” (“The Nation of Israel Lives”) plays on repeat in his car. Like many Congolese, he believes that Jews are a source of good luck, and said he would do anything to help them. 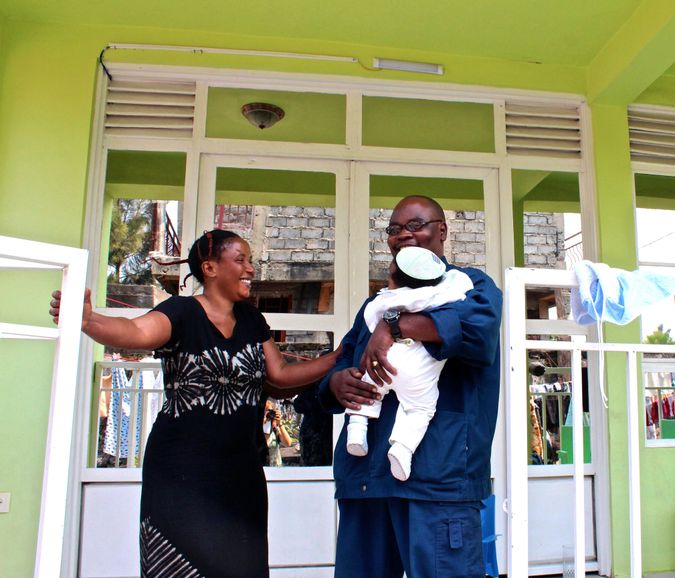 Aspiring Jew: Fidel Bafilemba poses with his wife, Ezeki Bafilemba, and their youngest child in front of his home in one of Goma’s better-off communities. Image by Miriam Berger

These kinds of Christian philosemitism are on the one hand quite commonplace: According to some Christian teachings, after all, Jews must return to Israel and convert to bring about the Messiah. But such beliefs don’t exist in a vacuum. In Congo, religion has a powerful place in society and politics, and has mixed with the legacy of colonialism in interesting ways to shape the outlook of the Congolese on Jews and Judaism. Now, as demographics and geopolitics in Israel shift, from the government’s rejection of African refugees and migrants to Prime Minister Benjamin Netanyahu’s tentative diplomatic pivot towards Africa, the Congolese experience is a curious part of the equation.

Not all Congolese churches preach like Emmanuel’s; exact figures, as for anything in Congo, are hard to come by. One Israeli tour group, Naama Tours, told me they bring about 20 to 50 Congolese, many of whom are priests, on trips to Israel about every two months. Visas and costs are the biggest challenges.

“A lot of people in Africa bless Israel,” Congolese-born Naama Ben Yair, 50, who organizes tours with her Israeli husband, told me by phone from Israel. “Here in Israel we don’t bless Africa.” She hopes her trips improve the relationship.

But it was something else that attracted Catholic-born Fidel Bafilemba to Judaism.

“Such enlightened, intellectual people, these are the people I want to join,” he told me from his high-walled home in Goma. Bafilemba, 44, wore a tracksuit, glasses and, for the interview’s sake, a yarmulke. He added later, with a laugh, “I can choose what I want to be. It’s kind of crazy.”

Bafilemba is a known civil society activist and consultant in Goma, and is less well known for having decided a few years ago to join Judaism, the only one in Goma to his knowledge. He, along with his Muslim-born wife and their children, are still in a long spiritual process of converting, he explained. But Congo’s messy politics — most recently the protests against President Joseph Kabila, and the resulting unrest and uncertainty — continue to put his plans on hold, he lamented. 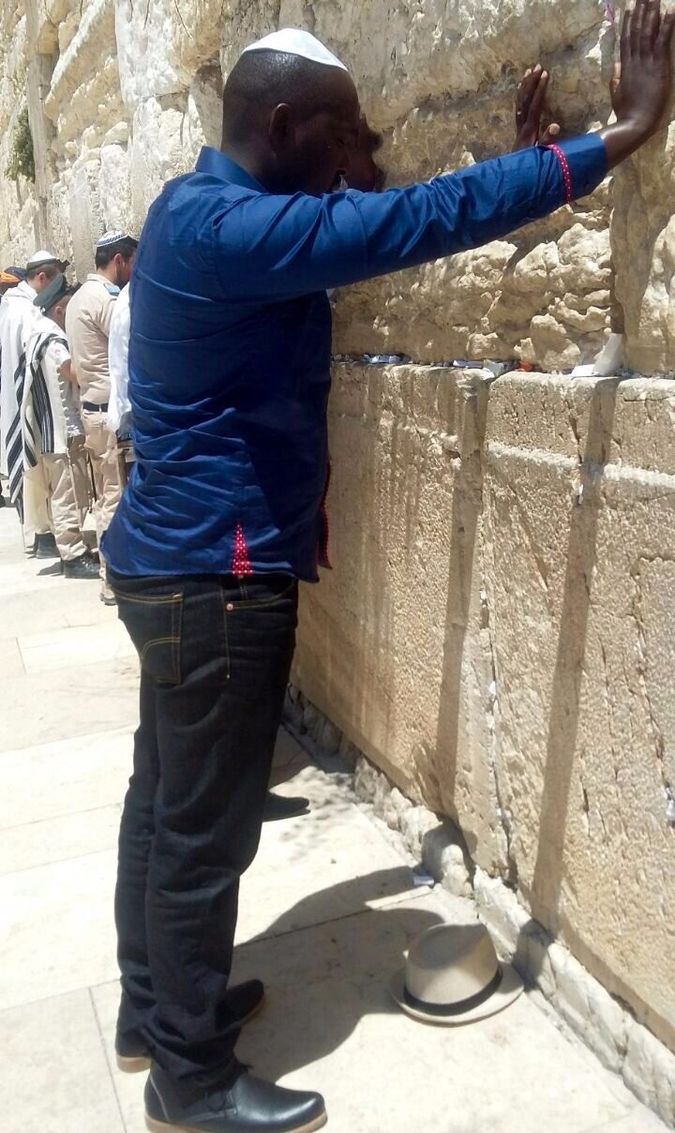 Bafilemba’s ideas of how to practice and define Judaism may look quite untraditional from a strict rabbinic perspective. But for him in Goma, that’s also not a problem.

These days, not many Jews, or tourists of any kind, make their way to eastern Congo, often depicted to outsiders as either a dangerous and impoverished war zone or a majestic mountain range, rare gorillas included. The modern history of resource-rich Congo, after all, has been exceptionally painful for its people. Back in the 1900s, colonizing Belgium brutally bludgeoned Congo for rubber and other natural resources (killing or working to death 10 million Congolese, according to some estimates), while in the 1960s, the newly independent country became entrenched in the West’s Cold War games.

Now the size of Western Europe, Congo most recently has been wracked by protracted political and economic conflict since the 1994 genocide in neighboring Rwanda and the 1997 overthrow of longtime dictator Mobutu Sese Seko, which drew over half a dozen countries into a regional melee. Millions of Congolese have been killed, wounded, displaced and stricken by hunger and disease in the years since, particularly in the mineral-rich east of the country, where rebel groups, despite peace accords, continue to thrive. The current president, Kabila, constitutionally must step down in December after 15 long years — but many worry that he won’t leave without a fight.

Years of troubles and state decline have also pushed the Congolese religion and churches to the forefront of society and politics. The National Conference of Bishops is one of the country’s most influential bodies and credible government critics. Under the Belgians, Christian missionaries flourished. And today nearly all Congolese are Christians of some sort: The majority are Catholic, followed by Protestant and evangelical, and then smaller subsets of other churches, with a remaining 5% of the population practicing Islam, according to U.S. State Department figures. At the same time, indigenous religious traditions, like beliefs in spirits, witches and magic, continue to thrive and hold significant power among people.

Bafilemba’s path to Judaism came out of these experiences: Born a Catholic, Bafilemba explains that he converted to Protestantism in 1996 and trained and worked as a pastor. But by the early 2000’s rebellions were raging in the east, and Bafilemba, feeling unsafe due to his politics, fled to Kenya, and ultimately on to South Africa. There, he joined and then left the scientology movement. Then, at a conference at a university in 2006 he was introduced to some South African Jews and what he referred to as his true calling: Judaism.

Bafilemba described being impressed by Judaism’s emphasis on education and how rabbis were open to discussion and challenges, unlike the Christianity he saw practiced in his country.

“Maybe this is my religion,” he recalled thinking. He contrasted this to hypocritical ways he said he had seen Christianity being practiced in Congo.

“I joined with Judaism because I was amazed with their belief in education and because I wanted to see if I could get anything from that and replicate that in my country,” he said. “It’s been a long journey.”

He’s collected books for the library and keeps them stored in his house. He even has some Jewish books that he’s picked up in his travels, which include a trip to Boston during which he visited some American synagogues. He speaks fluent English (among other languages), writes about Congolese politics and has traveled widely, though not yet to Israel. He’s waiting until the whole family can afford to go together.

Living in the eastern part of the country, Bafilemba doesn’t identify much with Congo’s other Jewish history. But Jews have also made modest, and at times controversial, marks on Congo. The country’s leading opposition leader today, Moise Katumbi, was born in southeastern Lubumbashi and is a descendant on his father’s side of Rhodesil Jews, who fled to European colonies in Central and South Africa during the mid-20th century to escape Mussolini and Nazi Europe. (These Jews settled on the Island of Rhodes — hence their name — after the Spanish expulsion in 1492.) In Congo, Rhodesil Jews were considered “white,” but many still maintained their distinctive traditions. Katumbi’s father, Nissim Soriano (or Nissim the Handsome, as he was also known), was prosperous in business. (Naama Ben Yair, of the tour group, is another Rhodesil descendant.)

Today in the capital, Kinshasa, there is also a Chabad of Central Africa, one of 13 missions the group has established in African countries, according to its website. The crowd there is never large, but among its supporters is the Israeli billionaire and diamond tycoon Dan Gertler, who has highly lucrative stakes in Congo’s coveted cobalt, copper, gold and ore mines, as well as its banking, oil and agriculture industries. Critics say he made his riches through kickbacks and connections with the regime: Gertler and Kabila have been extremely close since the late 1990s, when Chabad’s longtime and well connected rabbi, Shlomo Bentolila, first arranged for the two to meet, Gertler told Bloomberg News. It’s a relationship that at times has angered competing Lebanese diamond dealers.

But in distant Goma, Emmanuel does not associate this with Jews or with Israel. He was thrilled to be able to get to Israel himself.

Emmanuel has four children and makes decent money working as a driver for some of the hundreds of nongovernmental organizations and aid-related agencies that work in Goma, including the International Women’s Media Foundation, which funded my reporting trip. He’s part of a tentative, burgeoning “middle” or at least upwardly mobile class that has been enabled by the city’s aid industry in a city where much of the populace remains without running water as the divide rich and poor deepens.

For all its tenuousness, Emmanuel’s financial good luck enabled him to save money and travel to Israel this past May. According to his belief, as everything written in the Bible is in Israel, “once you see it in your eyes, it makes you stronger.”

He had an amazing trip, he told me, eagerly flipping through photos on his phone of him praying at the Western Wall, riding a camel and lunching with French Jews he met. They didn’t know much about Congo, so he was happy to explain.

He didn’t face any racism from Israelis, some of whom have had tensions with the country’s Ethiopian Jews and African refugees and migrants. “Israelis are my brother,” Emmanuel explained, his enthusiasm still high.

Emmanuel also said he was surprised to see Palestinians selling Israeli goods. But, he added, they were good people, too. And when Emmanuel went to visit Jericho, now in the Palestinian West Bank, he dressed for the occasion: donning a kaffiyeh, a traditional Palestinian male headdress and national symbol, along with his Congolese-trendy shades.