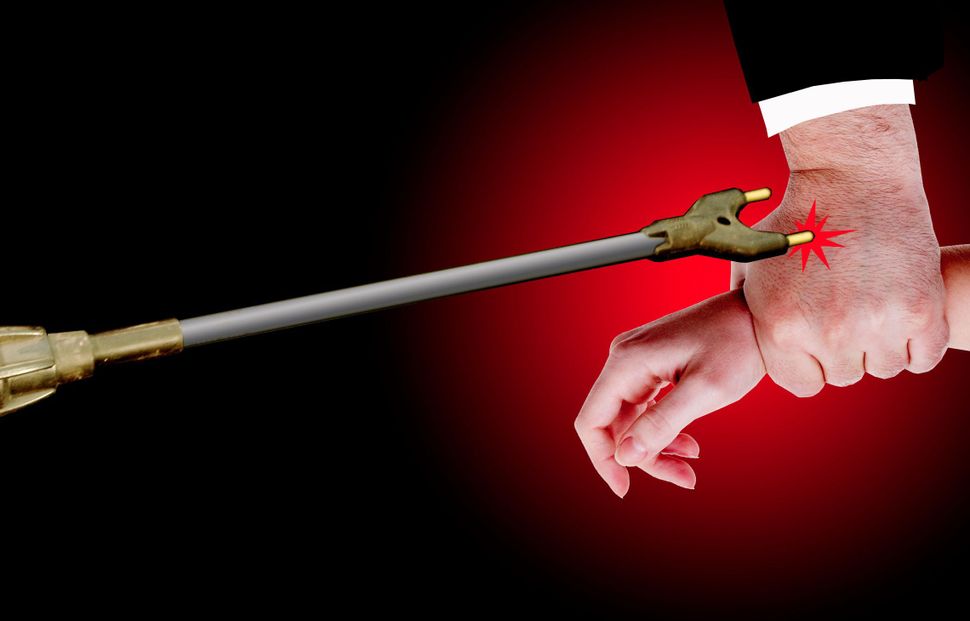 Call it the revenge of the chained wives.

In 2013, New York’s tabloids were enthralled with the case of the “Prodfather,” an Orthodox rabbi who led a kidnapping ring that charged hefty fees to use cattle prods on recalcitrant husbands who “chained” their wives by not giving them a religious divorce.

Today, the “Prodfather” is in a federal prison in New Jersey, but a new ring of ultra-Orthodox men stands accused of plotting another violent conspiracy that, if it had been carried out, would have made the “Prodfather” look like a yeshiva boy.

The latest plan, prosecutors say, was to kidnap and murder a Williamsburg, Brooklyn man who the conspirators claimed had refused his wife a divorce for a decade.

The private investigator, whose name has not been released, went straight to the FBI. He taped subsequent meetings with the conspirators, snippets of which are transcribed in court papers.

“In the back of my mind, it looks like, his parents will be happy when it happens,” court documents say Liebowitz told the private investigator when asked whether the intended victim’s family would worry if he disappeared.

Jewish law gives men the exclusive right to end a marriage, so when a vindictive husband chooses to withhold a divorce in an observant Jewish community, his wife has little recourse. Unable to remarry, she is considered an agunah, a chained woman.

Most people seek arbitration and mediation to resolve an agunah crisis. Others, like the “Prodfather,” have gone father.

Gottlieb is known to be involved in resolving communal marriage issues in the Hasidic community, according to a community source who asked not to be named for privacy reasons. Liebowitz, a young immigrant from Australia, lives in the village of Kiryas Joel in Orange County, New York, and is a member of the insular Satmar Hasidic community that dominates the village. The Satmar are one of many ultra-Orthodox religious communities with unique practices and customs. Goldberg is an Israeli rabbi with expertise in religious divorce issues.

While prosecutors have filed criminal complaints against the three men, they have yet to be indicted. As such, they have not entered pleas.

A lawyer for Liebowitz did not respond to a request for comment from the Forward. A lawyer for Goldberg declined to comment. Jacob Laufer who, along with Shulamis Peltz, is representing Gottlieb, told the Forward that he does not yet have access to the recording prosecutors say they have of the meeting involving his client.

Laufer noted that the private investigator who cooperated with prosecutors has a criminal record of his own. “In my own experience, a tape recorded conversation needs to be deconstructed and reviewed really carefully,” Laufer said. “There is often a question of who is steering or driving the conversation, which you can learn from the conversation itself.”

Prosecutors won’t say who Goldberg and Liebowitz’s alleged intended victim was, but multiple sources within the Hasidic community said that local rumors peg him as a Satmar man who has been the target of a high-profile pressure campaign that has grown increasingly intensive over the past year.

An attorney for the man’s wife did not respond to requests for comment from the Forward. The man himself could not be reached.

Since the time of the Talmud, rabbis and religious courts have struggled with how to free Jewish women from husbands who refuse to give them a get, a religious divorce document. A forced divorce is generally not considered valid, though some exemptions exist, and in extreme situations rabbinical courts are allowed under traditional Jewish law to authorize violence in order to extract a get.

It’s these sorts of rulings, which harken back to a premodern era, that rabbis like the “Prodfather” have relied on to justify their actions.

For the vast majority of Orthodox and non-Orthodox observant Jews in the modern era, of course, violence is not an option. So rabbis have sought alternative solutions. Today, Conservative Judaism tries to get around the agunah problem by inserting a clause in the traditional Jewish marriage contract which forces a divorcing couple to submit to the jurisdiction of a Conservative rabbinical court. The Jewish Orthodox Feminist Alliance has published materials to help women navigate religious divorces, and has run publicity campaigns to draw attention to the agunah issue. In 2014, Modern Orthodox rabbis set up a new rabbinical court specializing in cases involving recalcitrant husbands.

Others employ community organizing and public shaming to exert communal pressure when all else fails. “Each one of these cases is a train wreck,” said Rabbi Jeremy Stern, executive director of the not-for-profit Organization for the Resolution of Agunot. Stern’s group, which is endorsed by rabbis connected to the centrist Orthodox seminary at Yeshiva University, has eight full-time staff members and has resolved 268 cases since it was founded in 2002.

By the time a case makes it to ORA, Stern said, the couple has generally been separated for more than three years. “This is far into the process,” he said.

ORA begins by seeking amicable resolutions through communication and rabbinic courts. When that fails, they go public, organizing protests outside the homes and businesses of recalcitrant husbands, and seeking to have the men excluded from their synagogues and communities. The organization sees the refusal to give a get as a form of abuse.

“These cases are very difficult to resolve,” Stern said. “We continue with our pressure and our approach, and we try to brainstorm creative approaches.”

Not all in the Orthodox community are willing to be patient, like Stern. Liebowitz and Goldberg are accused of choosing a far more extreme route, and they are apparently not alone. Rabbi Mendel Epstein, the “Prodfather,” was convicted along with two other rabbis last April of conspiring to kidnap men and force them to release their wives from marriage. Six other men also pleaded guilty in connection to the scheme.

Prosecutors had Epstein on tape boasting that “tough guys” in his employ could force anyone to give his wife a get.

“I guarantee you that if you’re in the van, you’d give a get to your wife,” Epstein told an undercover FBI agent, according to the indictment in the case. “You probably love your wife, but you’d give a get when they finish with you.”

Epstein told the undercover agent that the kidnapping and religious approvals would cost between $60,000 and $70,000. He said that he arranged similar kidnappings every 12 to 18 months.

FBI agents arrested Epstein’s “tough guys” at a New Jersey warehouse in 2013. The men were wearing Halloween masks and carrying 30 feet of nylon rope, a blindfold, vodka and the necessary tools to fill out a get. Epstein was sentenced to 10 years for his role in the scheme. He is currently appealing the conviction.

The conspirators in the latest alleged kidnapping are affiliated with the Satmar Hasidic community; Epstein is a member of the non-Hasidic ultra-Orthodox community in Lakewood, New Jersey. But while they were aware of Epstein’s case, it wasn’t enough to stop them from making their plans.

At their first meeting with the private investigator, they discussed the risk of undertaking a kidnapping in the United States and cited the Epstein prosecution as an example. “Here in America, it’s a very, very big problem,” the private investigator said. “But if there is no other way, we have to do what we have to do, it’s just going to cost more, it simply is. We need to rent a house from someone in a small town…. You see the cage? You see yourself sitting here for two weeks?”

The men allegedly discussed carrying out the kidnapping in Ukraine, where their intended victim travels for Rosh Hashanah, or perhaps hiring a woman to seduce him into traveling to Mexico.

Prosecutors say that when the private investigator asked Goldberg who would pay for the kidnapping, Goldberg said, “The Jewish community.”

“There is money,” Gottlieb said. “There is going to be money.”

As plans progressed, according to prosecutors, conversations among Goldberg, Liebowitz and the private investigator began to turn away from a simple kidnapping and toward a murder, according to allegations in a complaint filed by prosecutors.

By that time, however, the private investigator was cooperating with the government. FBI agents arrested Leibowitz and Goldberg on September 6. Federal prosecutors announced the arrests September 7. On September 9, Gottlieb purchased a ticket to Ukraine. He was arrested at John F. Kennedy International Airport on September 11 as he was preparing to board the 10:00 p.m. flight. He waived his right to stay silent and, according to court documents, admitted that he had attended the July meeting with the private investigator and that he had delivered $25,000 to the investigator on behalf of Leibowitz and Goldberg.

“Our country protects freedom of religious beliefs and practices,” the FBI’s assistant director in charge, William F. Sweeney Jr., said in a statement announcing the first two arrests. “But no one is allowed to plot a kidnapping and murder regardless of their motivation.”