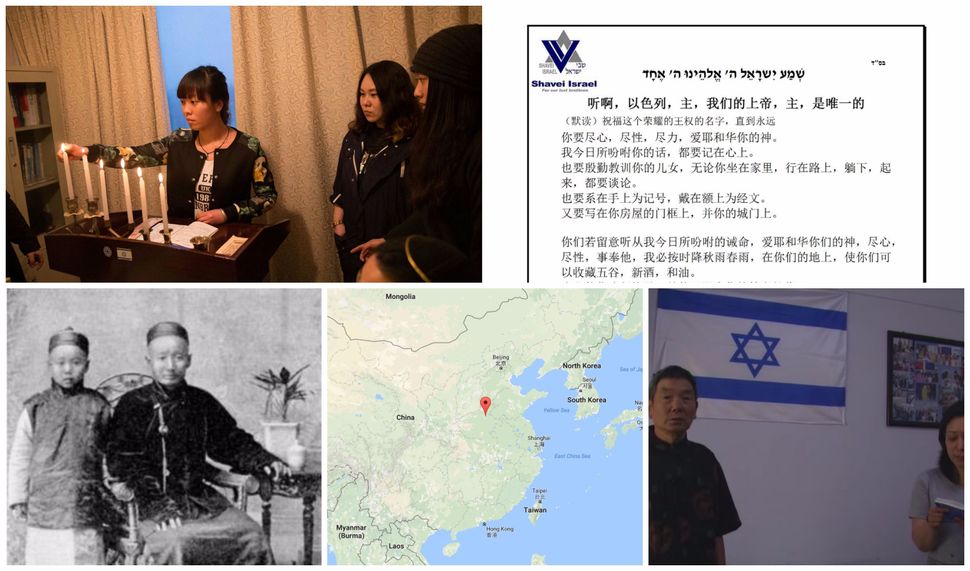 Recent months have brought reports that descendants of Jews in Kaifeng, China are under threat. Activists call it a government “crackdown.”

Police have shut down the only Jewish learning center in Kaifeng, helmed by the Israeli activist group Shavei Israel, say activists. A well that community members identify as their historic mikveh, for ritual Jewish bathing, was reportedly blocked. Foreign Jewish tour groups are said to have been barred from entering the city. And community members are allegedly being monitored and questioned.

Who are these descendants of Jews in Kaifeng? Are they being threatened and why? 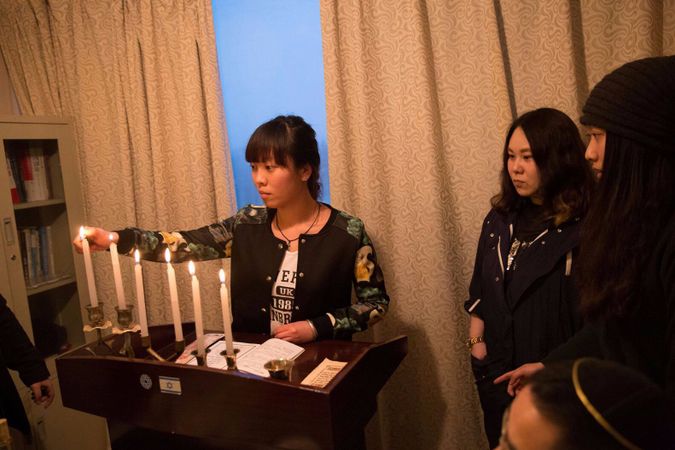 A group gathers in Kaifeng to light the Chanukah menorah with the Israeli group Shavei Israel. Image by Courtesy of Shavei Israel

Today there are up to 1,000 people in Kaifeng China who identify as descendants of Jews. They come from eight clans, but all claim descent from Jews who travelled along the Silk Road and settled here, establishing a presence by the 10th century in Kaifeng. In 1163, residents built a synagogue. During the Ming Dynasty, Kaifeng Jewry may have numbered as many as 5,000 people. 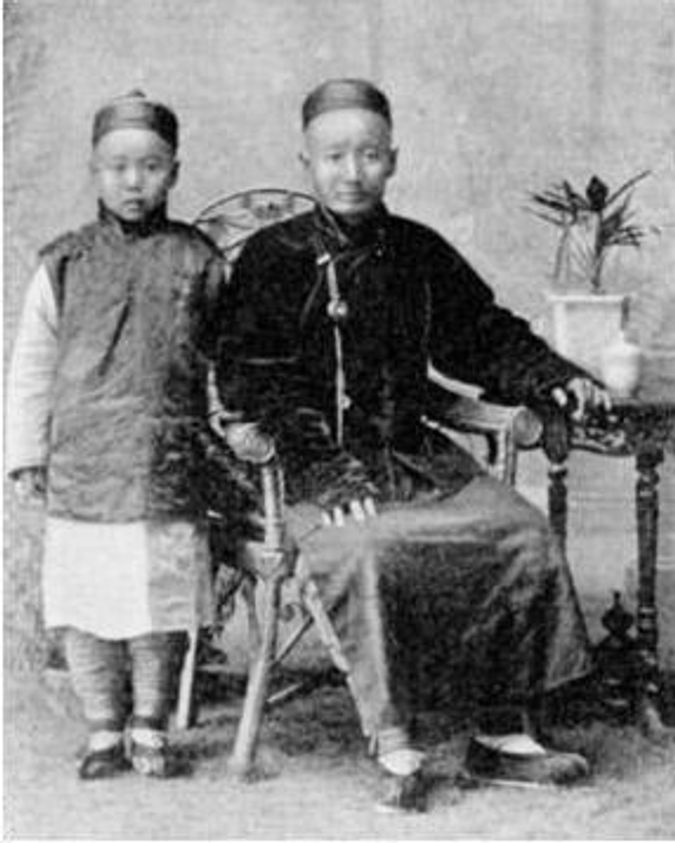 A pair of Jews in Kaifeng, in the the late 19th or early 20th centuries. Image by Wikipedia

But the group’s numbers waned. Fires and floods destroyed religious infrastructure. The last rabbi of the community died sometime in the first half of the 19th century, according to Shavei Israel, an Israeli organization active in Kaifeng.

In the beginning of the 20th century, European Christian missionaries hoped to rekindle the community’s religious memory and also introduce the New Testament. But the Kaifeng descendants had little interest, apparently. “No spark of interest in their history and in the divine heritage of Israel could be aroused in them,” bemoaned one Anglican bishop. “They were Jews no longer.”

China’s Cultural Revolution in the 1960s wiped out almost all signs of Jewish practice. There are now no more than 1,000 members who believe they have Jewish backgrounds.

Are they recognized as an ethnic group?

Not by the Chinese government. In 1953, the central government ruled that “Kaifeng Jewry should be treated as a part of the Han nationality.” They are today registered as Han.

While the government’s Religious Affairs Bureau has said that “there used to be a Jewish nationality” the government maintains that they “have long been assimilated into the Han nationality.”

Are they recognized as a religious group?

Not by the Chinese government. Religion in China is highly restricted and non-registered religious groups, including some Muslims and practitioners of Falun Gong, face intense state discrimination.

Are international Jewish groups active there?

European Jews and Christian missionaries have long been fascinated with the Jews of Kaifeng. The isolated community has received flurries of media attention over the years.

In the 1980s, as China opened up once more to the outside world, the Sino-Judaic Institute, a group of mostly American researchers, made contact with Kaifeng residents. The institute’s goal was both to conduct scholarly research and eventually help some Kaifeng residents connect with what they believe is their Jewish history through grassroots support.

In 2003, an American-Israeli Messianic Jew named Tim Lerner opened a school in Kaifeng call Yiceleye, which for many years was the center of Jewish learning in the area. Though Messianic, Lerner has said that his goal was to simply re-introduce the Kaifeng Jews to their heritage. With a group of Hong Kong evangelists, Lerner established an Association of Kaifeng Jews in 2004.

According to PhD candidate Moshe Bernstein, who is studying the Kaifeng Jews, Lerner contacted Michael Freund, CEO of Shavei Israel — a well-funded Israeli organization that searches for “lost and dispersed” Jews and often assists with immigration to Israel — in 2005. Lerner assisted with the immigration of four Kaifeng Jews to Israel, where Orthodox conversion was organized and absorption was financed fully by Shavei Israel in 2006.

Shavei Israel opened an independent center in Kaifeng in 2013, competing with — and later effectively unifying with — Yiceleye and a smaller breakaway school supported by the Sino-Judaic Institute. Shavei Israel says that the organization’s school offered a more “authentic Jewish environment.” Shavei Israel has since coordinated the immigration of twelve more Kaifeng Jews to Israel.

The three international groups working in Kaifeng are sometimes at odds with each other, as each have slightly different approaches and religious orientations.

The Sino-Judaic Institute has been active in Kaifeng since the 1980s.

Why is there a ‘crackdown’ now?

It’s unclear. It appears that certain local authorities have been undertaking this crackdown over the past couple of years, according to Freund, but “no one knows with any degree of certainty what lies behind it.”

Anson Laytner, former president of the Sino-Judaic Institute, has speculated that the growing profile of the Kaifeng Jews — including a New York Times post about a Passover seder in 2015 — may have raised the ire of some authorities. 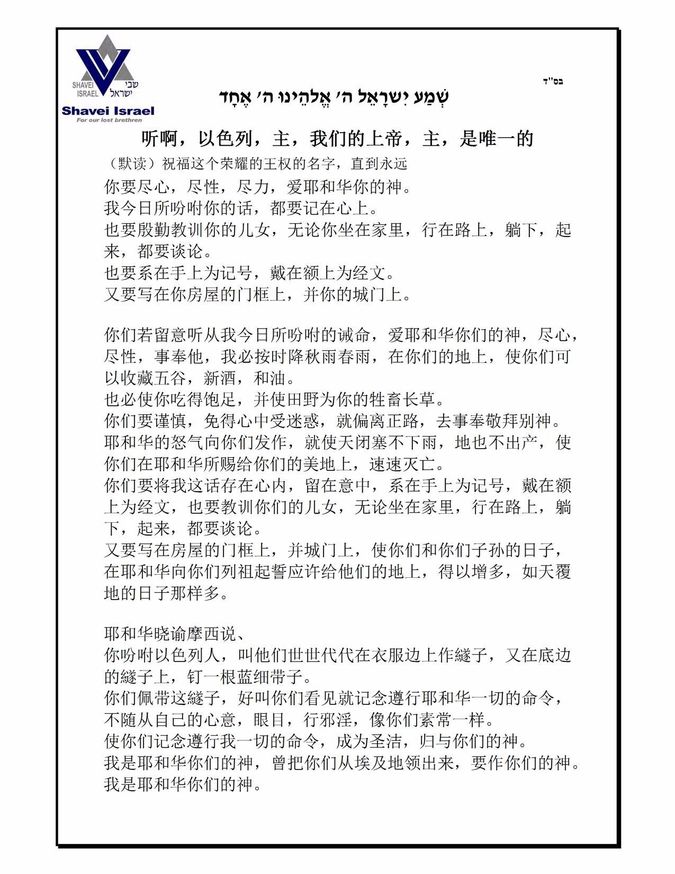 A Shavei Israel translation of the Shema, a central prayer of Judaism, into Mandarin.

Barnaby Yeh, a Sino-Judaic Institute associate, believes that the crackdown is the result of disputes between rival Kaifeng clans on the ground about the use of foreign Jewish funding — and that it also involves one Kaifeng Jew named You Qing who has since moved to the United states .

Yeh said that Qing’s family made reports to local police in 2015 which resulted in police investigations; Yeh has since also been barred from Kaifeng. Around this same time Qing flew to the United State, overstayed her tourist visa, and may have been granted asylum by an immigration court. Her asylum may have been granted on grounds of religious persecution, according to Laytner. (Freund said linking the crackdown to Qing’s immigration was “purely speculation.”)

Multiple messages to You Qing from the Forward have gone unanswered. Points East, a publication of the Sino-Judaic Institute, alerts readers to a “Crisis in Kaifeng” this July.

Twelve representatives of the Kaifeng Jews wrote a public letter, published in the July issue of Points East, a Sino-Judaic Institute publication, alleging that a local family has been scamming international groups using funds meant for the community for their own personal gain.

Some Kaifeng Jews themselves urged Laytner, Freund and others not to publicize the situation in Kaifeng — as more publicity might further upset Chinese officials. In their open letter the twelve Kaifeng Jews wrote: “The Chinese government has been very good to us. We love China, love the Chinese Communist Party.”