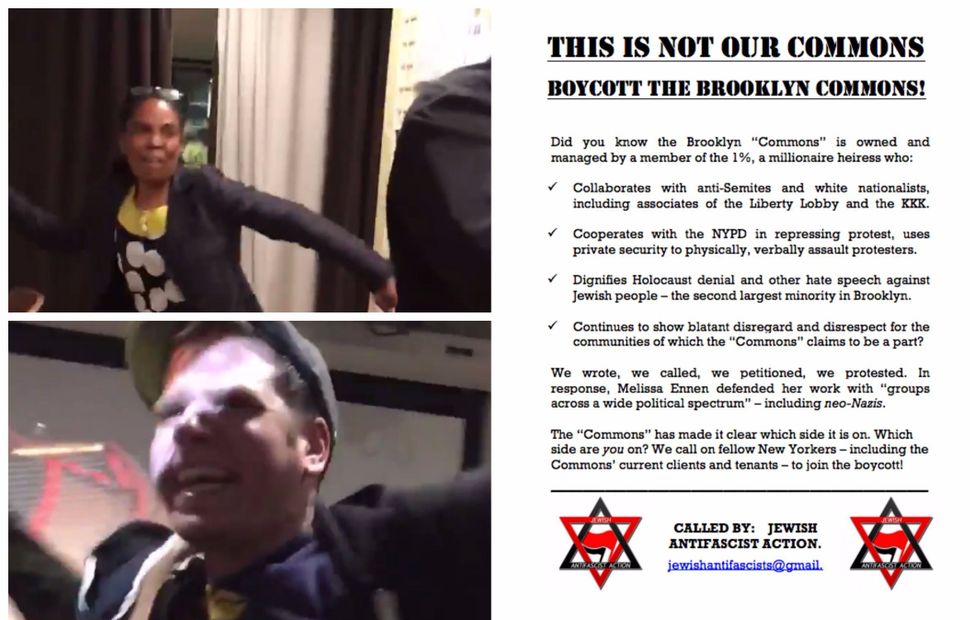 In Brooklyn, the progressive left is fracturing over charges of anti-Semitism.

A group of Jewish activists pamphleted an open mic event held last week at Brooklyn Commons, a progressive gathering space in Boerum Hill, condemning the venue’s leadership for partnering with “anti-Semities and white nationalists” — and the scene descended into chaos.

The crowd shouted. Cellphone cameras clicked on, cameras flashed. One man raised a chair over his head threateningly; a pile of papers, a coffee cup and music stand were wielded as weapons.

“I had never seen anything like it a progressive space,” said Michael A. Gould-Wartofsky, a protestor who was yanked off the stage. “I had seen it in neo-Nazi rallies, but never on the left at this tenor. People started … calling me a fascist and a Zionist Jew.”

Organizers at Brooklyn Commons, who protestors say forced them out of the venue amidst the uproar, declined to comment — and some Jewish activists denounced the protest.

No one was hurt, but the incident comes just weeks after Brooklyn Commons hosted anti-Semitic 9/11 conspiracy theorist Christopher Bollyn for a September talk — a move widely condemned by leftist Jewish groups. The Commons did not directly answer charges that Bollyn was anti-Semitic, but did stand by their decision to host him — saying that the rental space was never meant to be a “cozy cocoon” for leftists.

The entire fiasco also prompted wider soul-searching within parts of the Jewish left, as activist groups struggle to distinguish political criticism of Israel from what they see as more deep-seated anti-Semitism. Anti-occupation groups IfNotNow and Jewish Voice for Peace — whose members themselves are branded as anti-Semitic for their criticism of Israel — scrambled to condemn Bollyn rhetoric.

On the heels of the Bollyn event, JVP issued a “policy statement” defining anti-Semitism, seeking to distinguish “real anti-Semitism” from “problematic definitions,” like the ones leveled against them.

The new policy statement was put to the test just weeks later.

JVP condemned Miko Peled, a leftist Israeli writer, for expressing what they said were anti-Semitic views on Facebook. Other leftists pushed back, one condemning Vilkomerson as a “Zionist in the closet.” A few days later, the JVP dialed back its condemnation of Peled.

Gould-Wartofsky, who is a PhD candidate at New York University and also wrote a book chronicling the early days of the Occupy Wall Street protests, said that he would not seek to report the altercation at Brooklyn Commons to police.

He suggests that what’s at stake is competing definitions of anti-Semitism and the thorny question of when anti-Zionism becomes anti-Semitism.

“I have seen anti-Semitism on the left before,” said Gould-Wartofksy. “There are corners in the left that interact with the far right and see themselves on the same page.”

The group called themselves “Jewish Antifascist Action,” Cohen noted, but charged: “the so-called ‘anti-racists’… were as racist as can be.”