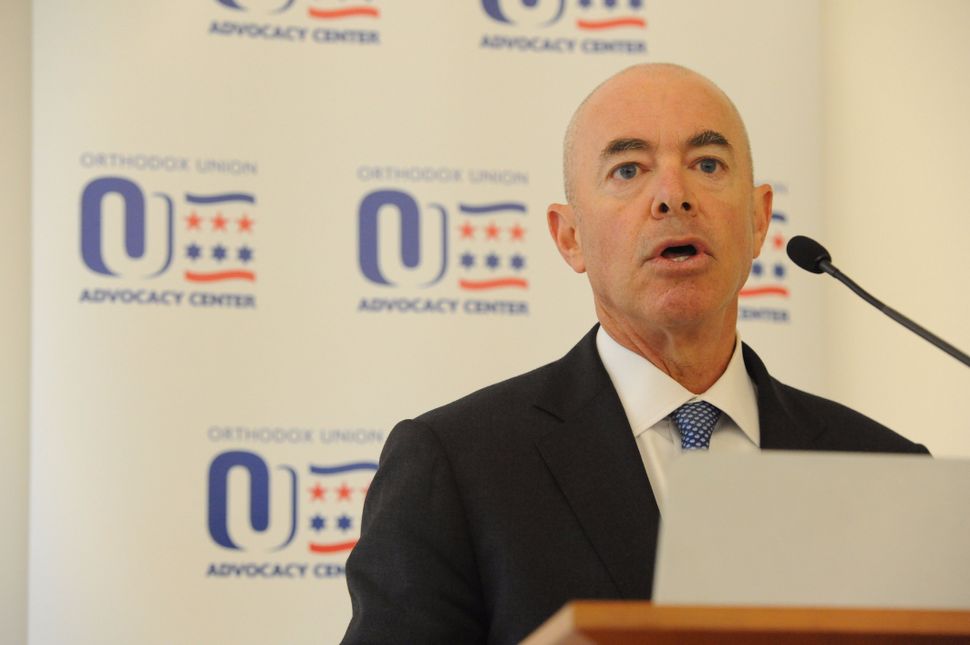 The effort comes amid signals that the federal program, which has drawn criticism from the editorial pages of this newspaper, has now achieved a new level of acceptance in Washington.

“We are pointing to explicit threats that are on record,” said Nathan Diament, chairman of the Orthodox Union Advocacy Center. Diament says that his group is pushing Congress to bump the size of the program to $25 million in 2017, which would be the largest it has ever been.

The Jewish Federations of North America, which is also advocating on the issue in Congress, regularly sends members of Congress summaries of threats to not-for-profit organizations in general, and to Jewish institutions specifically, as they make their case.

Congress allocates millions each year to the Nonprofit Security Grant Program, which funds security improvements for not-for-profit institutions, most of them synagogues and other Jewish organizations. Funding wavered between $9.5 million and $19 million between 2007 and 2015. For the 2016 fiscal year, Congress committed $20 million.

Diament said that funding for 2017 is holding steady at $20 million in current House and Senate appropriations bills, but that the Jewish groups are hoping to convince Congress to increase the funding by another $5 million before final approval.

Their case was bolstered September 21 in a speech by Homeland Security Deputy Secretary Alejandro Mayorkas, who spoke in favor of the program an OU event in D.C. “The need is most acute in the Jewish community because of the ascension of anti-Semitism and hate crimes we see,” Mayorkas said, according to a JTA report.

The public support from Mayorkas underlined a growing acceptance within the executive branch for the program. Advocates in the past have encountered resistance to the program from some officials within the Department of Homeland Security, according to David Pollock, director of public policy and security at the Jewish Community Relations Council of New York. And administration officials had previously pushed to consolidate the relatively small program with other small programs to create larger grant buckets that would give the agencies greater flexibility, according to Diament.

That resistance has largely fallen away. But while Mayorkas, in his speech at the O.U., openly asserted that Jewish groups need this money most, advocates continue to bristle at the notion that the program is designed to aid Jewish groups. Any not-for-profit can apply for the funding, which is administered through the Federal Emergency Management Agency. Bureaucrats within the agency decide which grant applications to fund.

“Decisions are based on threat level,” said William Daroff, director of the Washington office of JFNA and a leading advocate for the program on the Hill. “The fact that the majority of funds go to Jewish institutions [speaks] to law enforcement recognition of the higher threat level that Jewish institutions have in this post-9/11 world.”

Yet elected officials continue to promote the grants as a sop to the Jewish community. In a June press release, New York Senator Chuck Schumer listed the “66 Jewish organizations” in his state that would benefit from security grants in the 2016 fiscal year.

In a press release, the O.U. said that 247 of the 282 grants made in the 2016 fiscal year went to Jewish organizations. A spokesperson for the O.U. could not say how the organization had come up with that number.

Churches and other non-Jewish charities have received money through the program in the past. Leaders of national Muslim organizations told the Forward that their community is less equipped to apply for programs like the NSGP. While groups like Pollock’s JCRC spend significant energy teaching Jewish charities how to apply for the NSGP, Muslim organizations have devoted fewer resources to lack these apparatuses.

“Our institutions are still developing,” said Hazem Bata, secretary general of the Islamic Society of North America. “We just haven’t reached that point yet…. It is the type of thing that we are now beginning to address more seriously.”

Federal hate crime statistics show that the majority of anti-religious hate crimes reported to the FBI are motivated by anti-Jewish bias. But anti-Muslim hate crimes have [increased] (https://www.washingtonpost.com/news/wonk/wp/2015/02/11/anti-muslim-hate-crimes-are-still-five-times-more-common-today-than-before-911/) in frequency since 9/11, and the FBI statistics are thought to undercount all types of incidents.

New York synagogues contacted by the Forward that received funding through the program in 2016 were unwilling to speak about their experience, citing security concerns. But according to Pollock, demand for grants in 2016 far outstripped the supply of available cash.

“There are institutions that local police feel are at high risk that did not receive grants,” Pollock said.

Recipients of the grants, worth up to $75,000, must be charities located within a select number of urban areas. FEMA officials take into account prior threats to the charities along with the symbolic value of the buildings, among other factors. Funds are meant for “target hardening,” including the installation of new security equipment, but they cannot be used to pay security guards.