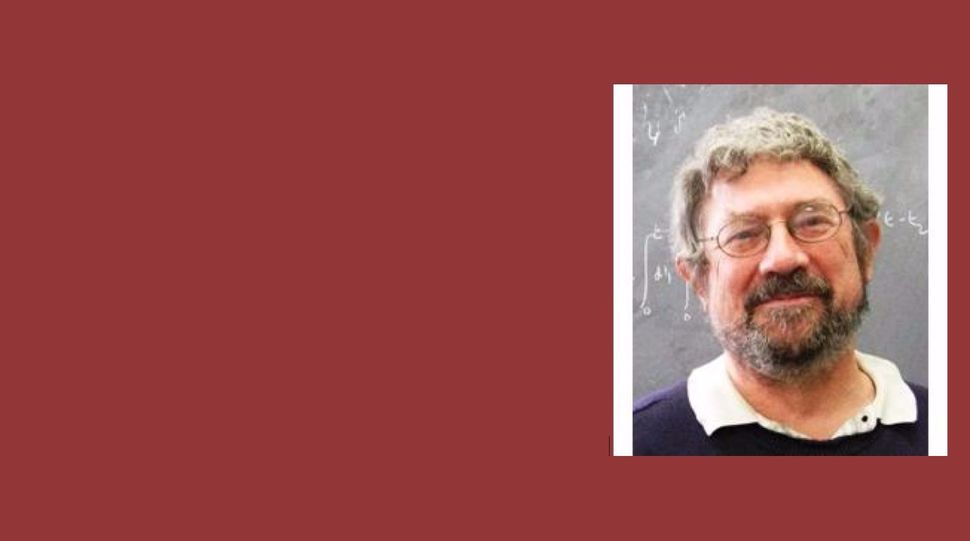 How does a bagel explain the physics theory that helped a British Jewish professor win a share of the 2016 Nobel Prize in Physics?

Michael Kosterlitz, who is Jewish, shared the prestigious prize with colleagues David Thouless and Duncan Haldane for revealing unusual states of matter, leading to advances in electronics that could aid researchers trying to develop quantum computers.

“Jesus. That’s incredible. That’s amazing,” Kosterlitz told a journalist who informed him that he won the prize, according to the Telegraph newspaper.

Their research centers on topology, a branch of mathematics involving step-wise changes like making a series of holes in an object. The difficult-to-grasp concept was illustrated by Nobel Committee member Thors Hans Hansson at a news conference using a cinnamon bun, a bagel and a Swedish style of pretzel with two holes.

“If you are a topolgist, it’s only one thing that is really interesting with these things,” Hansson said. “The bagel has one hole, the pretzel has two holes … you cannot have half a hole, or 2-2/3 holes.”

The Nobel Prize-winning discovery involved certain materials that go through step changes that affect their electrical properties. The changes are akin to the holes in baked goods, which can have no intermediate steps between one hole or two holes.

One example is a superconductor, which at low temperatures conducts electricity without resistance.

“Thanks to their pioneering work, the hunt is now on for new and exotic phases of matter,” the Royal Swedish Academy of Sciences said in awarding the 8 million Swedish crown ($937,000) prize.

“Many people are hopeful of future applications in both materials science and electronics.”

Thouless, of the University of Washington in Seattle, was awarded half the prize, with the other half divided between Haldane, of Princeton University, and Kosterlitz, of Brown University.

“We really haven’t understood … the full amount of marvelous things that quantum mechanics can do,” Haldane told Reuters in an interview at his home in Princeton, New Jersey. “It does things which we never dreamed of and could actually be tremendously useful for all kinds of new technologies.”

“You never know, because there are exciting discoveries everywhere, so every year we start thinking is this the year,” Ying said in an interview on Brown’s campus in Providence, Rhode Island. “Personally, I think it’s long overdue.”

Andy Schofield, a professor of theoretical physics at the University of Birmingham, where Kosterlitz and Thouless carried out their early work in the 1970s, said the new understanding of phase states was particularly promising in computing.

“One of the most exciting technological implications is in insulators that don’t carry electricity normally but can be forced to carry electrical current at the surface,” he told Reuters. “That’s a very robust state, which gives a stability that is essential to quantum computing.”

Superfast quantum computers, one of the holy grails of science, should be able to test multiple solutions to a problem at once and could in theory solve in seconds problems that take today’s fastest machines years to crack.

Traditional computers use binary bits of information to store data while quantum computers use “qubits” that can simultaneously be 0 and 1, making them ultra-fast but unstable.

Physics is the second of this year’s crop of Nobels and comes after Japan’s Yoshinori Ohsumi was awarded the prize for medicine on Monday.

There had been speculation this year’s prize might be awarded for the first detection of gravitational waves, the ripples in the fabric of space-time first predicted a century ago by Albert Einstein. The breakthrough, announced by international researchers in February, may have come too late for the Nobel Committee.

The three researchers join the ranks of some of the greatest names in science, including Einstein, Niels Bohr and Marie Curie.

The prizes were first awarded in 1901 to honor achievements in science, literature and peace in accordance with the will of the Swedish dynamite inventor and business tycoon Alfred Nobel, who left much of his wealth to establish the award.—Reuters