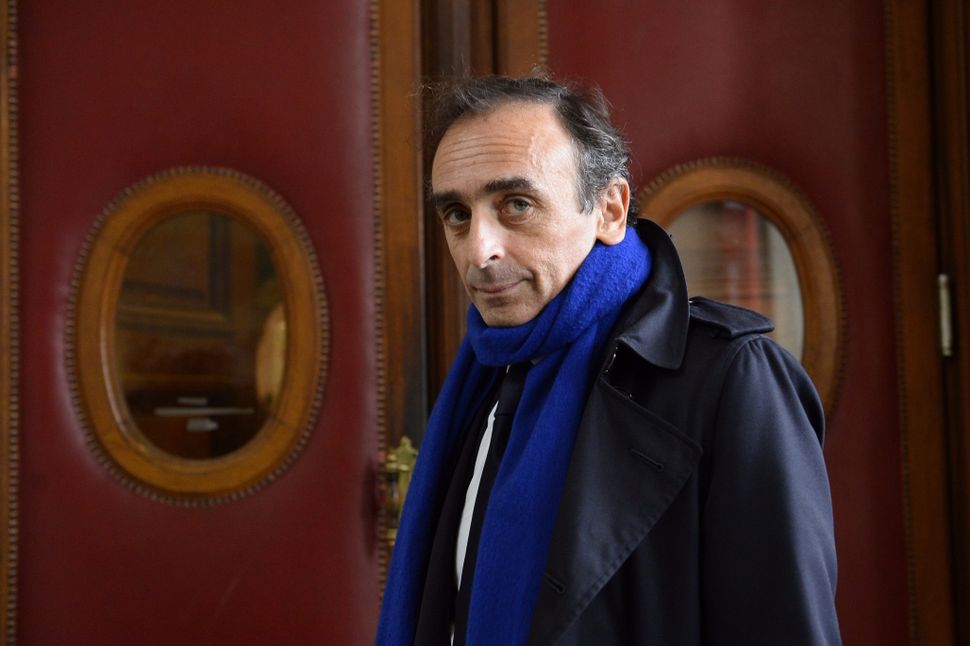 After praising the courage of jihadists, the French Jewish intellectual Eric Zemmour might face charges for “apology for terrorism.” According to “Le Monde,” the prosecutor’s office in Paris opened a preliminary investigation last Friday into remarks Zemmour made to the magazine “Causeur,” during an interview titled “The Muslims Must Choose Between France and Islam.”

“What condescension! Me, I take Islam seriously, I don’t hold it in contempt… And I respect those who are ready to die for what they believe, which we are not capable of,” he said, in response to his questioner’s suggestion that terrorists suffered from “weak spirits.”

The seemingly paradoxical words of the right wing intellectual who—known for vexing public discourse—has clamored for the expulsion of Muslims from France, angered the families of terror victims. The country has dealt with a wave of terror attacks over the last two years, with two assaults in Paris and one in the Southern city of Nice. Families from the second Paris attack, which occurred last November and involved shootings at a concert hall, night clubs, and restaurants, lodged the complaint with the prosecutor’s office.

“It shows a lack of respect for the families, an insult to the memory of the victims,” said Samia Maklouf, the attorney for the families, according to “Le Nouvel Observateur.” She also demanded that “Causeur” retract the interview and remove it from the Internet.

Élisabeth Lévy, the publisher of “Causeur,” defended him in a weekend interview with the newspaper “Le Figaro.” “Zemmour’s phrase might offend, but freedom, this to be offended,” she proffered. She also blasted the idea that individuals should be prosecuted under the charge of apologizing for terrorism.

Zemmour has a track record of making inflammatory statements. France’s right wing prophet of doom, he believes that the country has been going downhill since the beginning of the counterculture and mass immigration from outside Europe. In addition to calling for the removal of Muslims, he has also defended France’s wartime Vichy regime—a Nazi puppet state—on the well accepted charges that it was complicit in the murder of Jews. He has been already brought to court on accusations of “inciting racial hatred.”

Zemmour forms part of a coterie of intellectuals in France, known as the “neo-réactionnaires,” or the “neo-reactionaries.” Including numerous Jews, such as the intellectual historian Alain Finkielkraut and Lévy, this group believes that globalism and the immigration flow from Muslim countries has undermined France’s national identity and placed the country—and especially its Jewish community—at heightened risk from radical Islam.

Critics of the neo-reactionaries have placed them in the same category as the country’s far right, with the National Front and its leader Marine Le Pen. Such a classification is disputed in the intellectuals’ camp. It is a striking position in which the group’s Jews find themselves, considering the Jewish community’s traditional left wing allegiance, borne of antipathy to Catholic political influence and exclusionary notions of national identity.

Reflecting the pessimism of the neo-reactionaries, Zemmour told the BBC in a recent interview: “The sovereignty of the nation has disappeared… There are parts of France which feel like a different continent today. There are neighborhoods which are completely Muslim—in their appearance, in their shops, in their tradition.”