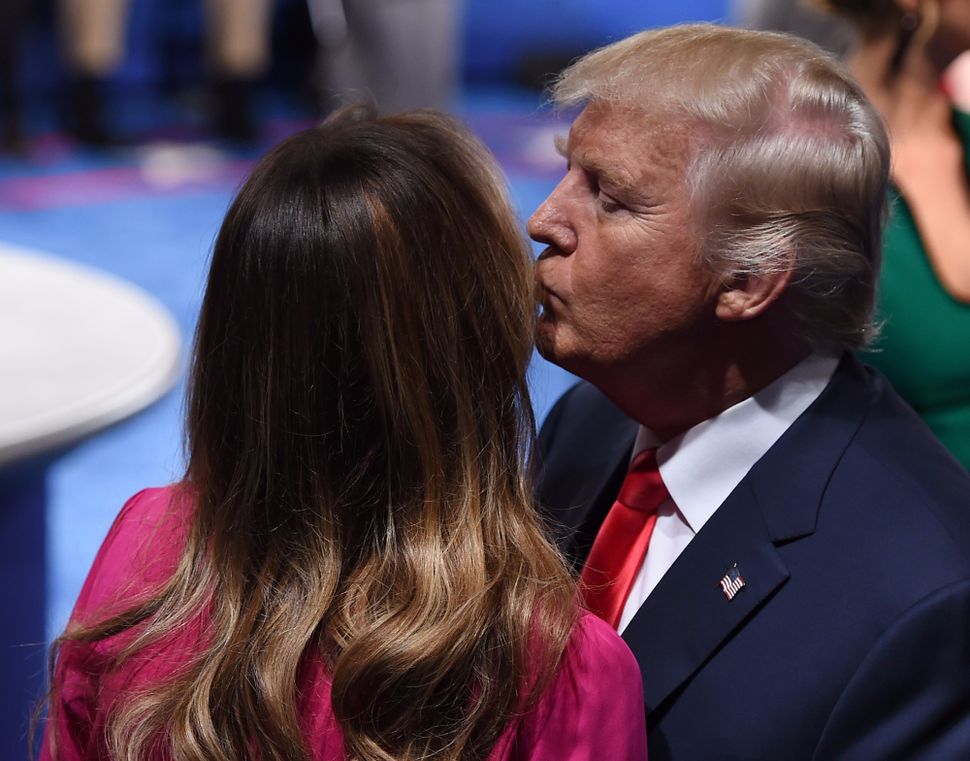 The vulgar tape, recorded in 2005 and posted online by the Washington Post on October 7, played in heavy rotation all weekend on cable news channels. In it, Trump says that he can get away with grabbing women’s genitals because he is famous.

“Just kiss. I don’t even wait,” Trump says in one of the video’s less explicit exchanges.

Yet Orthodox media outlets have avoided mentioning the video out of modesty concerns. And since many ultra-Orthodox leaders ban television, the internet, and secular newspapers, it is unlikely that the tapes will reach the community’s more insular corners.

“We worked many hours yesterday” figuring out how to write about the tapes, said Moshe Friedman, publisher of the Jewish political news website JP Updates. While JP Updates’s website carried stories about the video, an email newsletter the site publishes that targets more observant readers was more cautious, Friedman said.

“You couldn’t write anything about sexual things, you couldn’t specify,” Friedman said.

An email newsletter from the Samar-affiliated Williamsburg, Brooklyn newspaper Der Yid published Monday morning referred to Trump’s “scandalous comments,” but gave no details. In a pre-debate post, the Orthodox magazine Mishpacha advised Trump to “Talk Tougher,” and advised Clinton to “Smile Less,” but [made no mention of the video.

And the Brooklyn-based Orthodox newspaper Hamodia, the largest English-language Orthodox newspaper, carried an Associated Press story about the debate on the third page of its Monday morning print edition that referred to “inappropriate comments” in a video, but had no story that described the content of the video itself.

In the broader electorate, the video shook many of Trump’s religious supporters. And while some prominent Evangelical Christian leaders have stuck with Trump, the president of the Southern Baptist Theological Seminary, R. Albert Mohler Jr., wrote in the Washington Post that the video had created a “crisis of conscience” for Evangelical Christians.

Orthodox Jews, like Evangelical Christians, are thought to heavily favor Trump. Yet it does not appear that the video has sparked the same sort of crisis in the Orthodox community.

With Orthodox media constrained from getting too specific about the new video, it’s difficult for writers to show why the apparent boasts about sexual assault in the 2005 tapes are different from earlier statements by Trump that breach communal modesty norms.

“Most of the media that they’re going to get is not going to be able to pinpoint the problem,” Friedman said.

Many Orthodox outlets have long banned displaying photos of women, a policy that caused controversy in 2011 when a Yiddish-language Brooklyn newspaper airbrushed Hillary Clinton out of the photo of the White House Situation Room during the Osama bin Laden raid.

Those rules have been loosened slightly in recent months to allow some images of Hillary Clinton. But wrestling with instances where the content of political news itself is vulgar remains tricky. One editor at an Orthodox newspaper, who asked not to be named because of the sensitivity of the issue, said that the first time he recalled dealing with the problem was when Eliot Spitzer resigned as New York governor amid a prostitution scandal. “We beat around the bush,” the editor said.

Even for those Orthodox Jews who do see the new Trump video, as many certainly will, insiders said that it’s unlikely to change their minds.

One Orthodox community activist said that Trump’s vulgarity has already been “factored in, to a degree.”

“The [Orthodox] people that are more isolated…for them every person, every non-Jew, and of course every politician, would talk dirty,” said Friedman. “So they couldn’t even understand what is the whole issue that he spoke dirty, when everybody is dirty.”