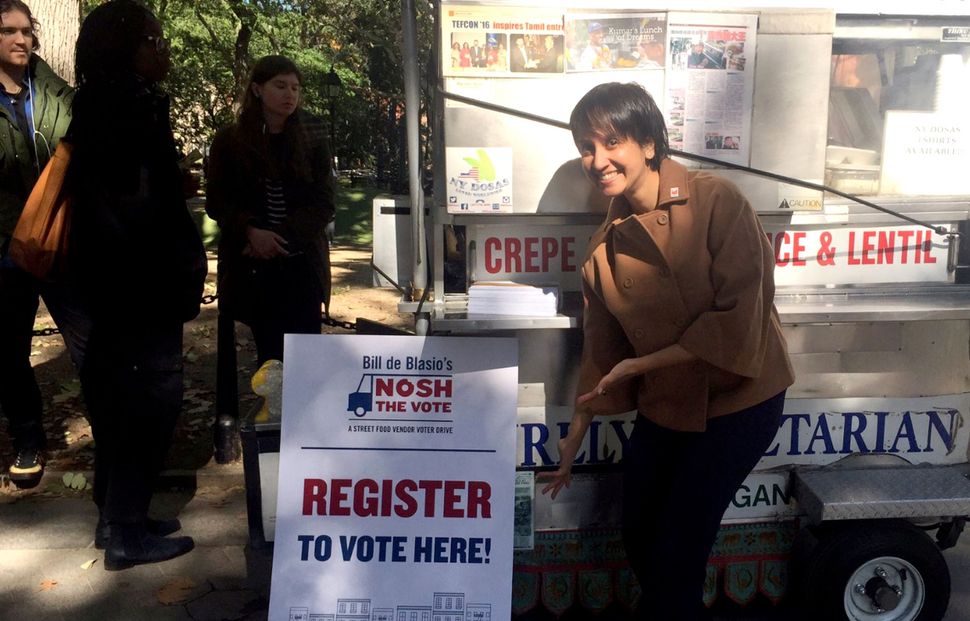 As Jews in New York today got ready to start their Yom Kippur fast at sundown, the city offered them one more opportunity to chow down — and also to register to vote. As part of the “Nosh the Vote” program, a dozen food trucks and street carts across the five boroughs today distributed voter registration forms to customers, along with the usual delicacies.

“The people must vote if we want to make this a fairer and better country,” said a press release from Mayor Bill de Blasio’s office. “Friday is the last day to register to be eligible to vote for president. So come grab lunch and #NoshTheVote,” it added, referring to the campaign’s Twitter hashtag.

To “nosh” is a Yiddish term meaning “to snack.” Since the late 1800s, Jews have formed a large minority of New York City’s population and have influenced its culture and idiom. As of 2011, the number of Jews in the city’s metropolitan area was about 1.5 million out of about 8 million total.

On the social media site, New Yorkers posed at local food stands that were participating in the program. Nisha Agarwal, the commissioner for the city’s immigration affairs division, posed in front of New York Dosas, a Greenwich Village eatery that sells South Asian food, writing on Twitter.

Dosas and democracy! What could be a better combo? Register to vote! #NoshtheVote pic.twitter.com/IEkfSTI1vQ

Samantha Moreno praised the effort, inspired by voter registration efforts in the Southwest known as Guac the Vote.

#GuacTheVote and #NoshTheVote both speak to me on many levels as a Jewish Tejano – and both are doing amazing things for this country! https://t.co/OVJh87fDN2

Meanwhile, Rabbi Josh Yuter expressed what sounded like a mix of incredulity and irritation.

Whether you’re noshing or fasting tonight, please get that registration form in by Friday so we can #NoshtheVote.