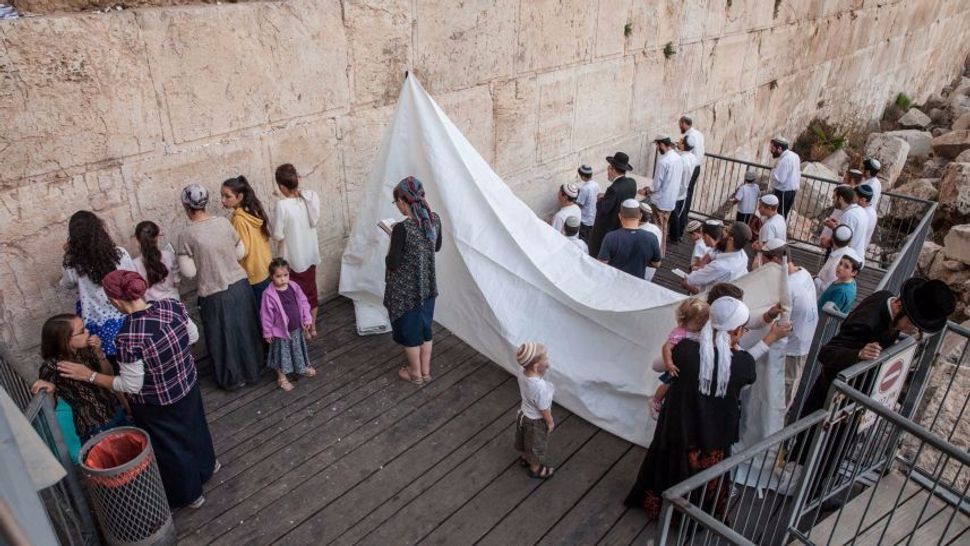 As the government ignores the question of opening the Western Wall to non-Orthodox denominations dozens of Orthodox Jewish worshippers are establishing facts on the ground by holding festive holiday prayer services everyday in the section of the Western Wall, or Kotel, that had been intended for non-Orthodox prayer.

Demonstrative Orthodox services are being held at the Robinson’s Arch compound a few times daily, as a result of a public relations campaign by religious Zionist bodies.

These prayer sessions are perfectly legal and violate no rules, as long as no “local custom” has been established for the new compound.

The Robinson’s Arch space was set aside by the cabinet for use as an egalitarian prayer section, unlike the main Kotel plaza, which is strictly Orthodox.

The prayers there are held on a raised platform at the southern end of the Western Wall built in the summer of 2013 at the initiative of Naftali Bennett, Israel’s Education Minister, who was Religious Services Minister at the time.

It was supposed to be a temporary solution for groups such as Women of the Wall and other non-Orthodox denominations. A cabinet decision from January 2016 assigns the entire compound to non-Orthodox for mixed-gender prayers, for worship without a barrier separating men from women.

For now, as long as the Religious Services Minister, David Azoulay of Shas, has not yet drawn up regulations implementing the cabinet decision, it remains meaningless; so for now prayers may be held by any denomination in the compound, men and women may be separated there as has occurred during the current week of Sukkot.

Selihot penitential prayer services were held there, too, this year during the Jewish month of Elul before Rosh Hashanah.

The Orthodox prayer services being held in the “Ezrat Yisrael” section, intended for use by non-Orthodox worshippers, can be held every day of the year, around the clock.

But since the Orthodox have the main plaza at their disposal the prayers being held there in the past few days appear to be just another expression of the collapse of the proposed compromise over the Kotel. The Liba Center – A Jewish Heart in Israeli Public Life organization is behind the initiative for holding Orthodox services in the non-Orthodox section. Liba is considered to be identified with the “Hardal” wing of right-wing religious Zionism.   The new trend of demonstrative Orthodox prayers at Robinson’s Arch has come about as Women of the Wall and liberal Orthodox circles have not let up in their battle to hold prayers as they wish in the main Western Wall plaza, which is under the auspices of the chief rabbi of the Western Wall, and which a government plan defines as following Orthodox custom.

On Thursday morning a group of women held a prayer service in the women’s section of the main Kotel area. Their attempts to smuggle in a Torah scroll into the area were stopped, and police detained a man who attempted to remove a Torah scroll from the men’s section and hand it to the women on their side of the gender divider.    In a text message published this week on WhatsApp and other messaging services, Liba called for people to come for services at the “Ancient Kotel at the place the government wants to give to the Reform [movement],” in the afternoon and evening, and to hold a class there in between.

“These days the Reform [movement] is increasing its struggle and trying to blur simple Jewish identity of the past 3,500 years and turn Judaism into something else,” another message says. “We are strengthening Judaism and protecting the Kotel and continuing the eternal tradition. Until the Temple is rebuilt. Happy holiday!”

Posters were also put up quoting former chief rabbis describing the southern Western Wall compound as having the identical status as the official Kotel plaza.

The calls to come and pray succeeded well beyond expectations, with religious worshippers attending prayers there three times a day.

The compound is also used by Reform and Conservative groups, but not as regularly it was used by the Orthodox this week. No friction or incidents there were reported.

The first such services to hold Orthodox services at what is called the “Reform Kotel” (even though in practice it is actually run by the Conservative Movement), came from a group of activists lead by Mati Dan of the Ateret Cohanim organization.

In June, the group held a service there with former Sephardi chief rabbi Shlomo Amar, now the chief rabbi of Jerusalem and a fierce opponent of the Kotel compromise.

The June service brought a harsh response from the non-Orthodox denominations in Israel and the United States.

An organizer at the Liba Center said: “The rationale is simple. The Reform [movement] is fighting in court and by press releases, we are simply establishing facts on the ground, setting the awareness that the place is holy like the Kotel. So far the place was empty of Reform [Jews] all of the Sukkot holiday, and at the same time it is filled with the people of Israel who have come to pray there.”

Yizhar Hess, director-general of the Israeli Conservative Movement, applauded the initiative to pray in the Ezrat Yisrael section, as a suggestion that non-Orthodox Jews could hold their prayers at the main Kotel plaza, too.

“It is clear that if the compromise framework at the Kotel collapses then there is no reason from now on that egalitarian minyans can be prevented from praying at the recognized Kotel plaza, and for Orthodox minyans to pray in Ezrat Yisrael,” he said.

Hess said they will soon begin to pray in egalitarian groups at the main Western Wall area, and says it shows the appropriate solution is dividing the existing Kotel plaza into three sections, and that the proposed compromise was a mistake.

Hess said he hoped the Supreme Court would do what the government has not and decide that the customs of all Jews should be respected at the Kotel, men and women, Orthodox, Conservative and Reform.