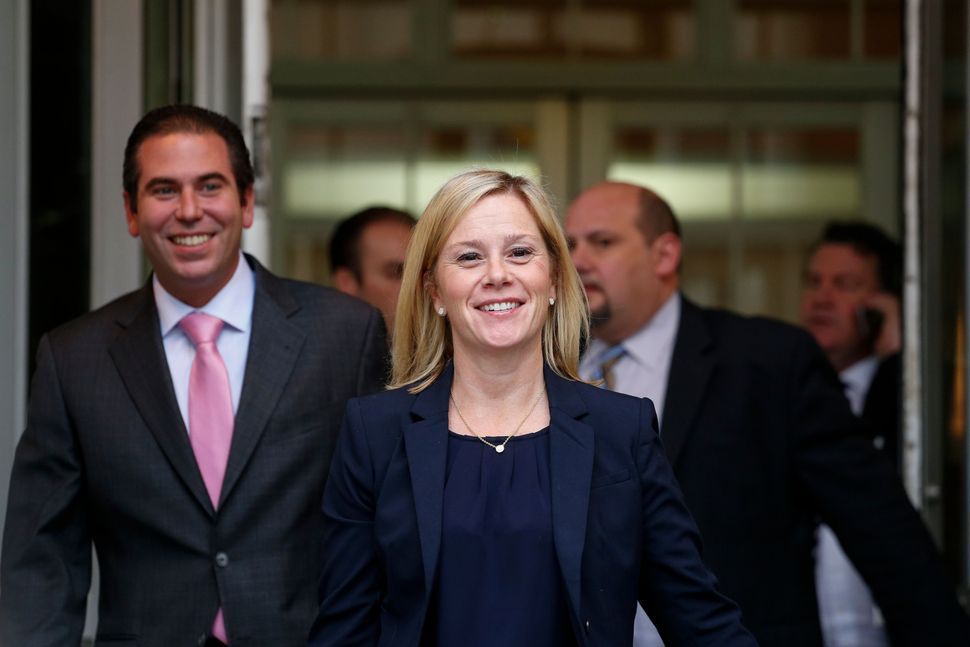 Bridget Anne Kelly characterized Rabbi Mendy Carlebach, who leads the Chabad House at Rutgers University, as something of a pest.

“He would show up at events he wasn’t invited to,” Kelly told the court on Monday. “He would want face time with the governor… Rabbi Carlebach was a very nice man. It just — it got to a point where your superiors mention to you repeatedly: Why is Rabbi Carlebach here? You start to — you question it yourself.”

Reached by the Forward, Carlebach said that he wasn’t aware of the testimony, which took place on the last day of the Jewish holiday of Sukkot, when observant Jews don’t use electricity.

“I only go to places where I’m invited,” Carlebach said, after hearing selections of Kelly’s statements. “I’m the administrator of the largest Chabad House in the country. I’ve got a lot on my plate. I’m not looking where to go to spend my day.”

Kelly, who was a deputy chief of staff in Christie’s office, is charged along with Bill Baroni, a former deputy executive director of the Port Authority, with nine counts of conspiracy and fraud in connection with the 2013 closing of access lanes on the George Washington Bridge. Their trial has been ongoing since mid-September.

In court on October 24, Kelly testified that Carlebach “showed up” at stops on a 2012 visit Christie made to Israel, after Carlebach had been told that only his father, and not he, was invited to attend.

“When the Governor got home from Israel, I had gotten an earful about the fact that, you know, I said, ‘Mendy wasn’t suppose to be there.’” Kelly said.

Carlebach told the Forward that he remembered the trip, but that he didn’t recall any conflict over his presence there. The South Brunswick Patch, a local news website, covered Carlebach’s participation at the time.

In court, Kelly’s attorney asked about a string of texts about Carlebach between Kelly and David Wildstein, the former senior Port Authority official who has pled guilty to conspiracy charges in the Bridgegate scandal and is cooperating with prosecutors. Those texts included one exchange about the 2013 Broadway musical “Soul Doctor,” about Rabbi Shlomo Carlebach, a distant cousin of Mendy Carlebach’s.

In an August 2013 text, Wildstein asked Kelly if she wanted tickets to the show. Kelly responded, “You are ridiculous.”

Kelly testified that she thought that Wildstein was “being funny.”

(The New York Times called the musical “bizarre” in its review. It closed quickly.)

The same day as the “Soul Doctor” text, Wildstein wrote to Kelly that Carlebach has ”officially pissed me off.” Kelly responds: “We cannot cause traffic problems in front of his house, can we?” Wildstein wrote back: “Flights to Tel Aviv all mysteriously delayed.”

The “traffic problems” message has drawn attention in the press because it echoes the famous “time for some traffic problems in Fort Lee” message that Kelly sent to Wildstein a week earlier, the revelation of which in January of 2014 reinforced suspicions that the 2013 lane closings on the George Washington Bridge had been politically motivated.

Kelly and Wildstein’s email about traffic problems in front of Carlebach’s house was first made public in February of 2014. At the time, Carlebach told MSNBC that he was puzzled by the apparent jokes.

He’s still puzzled. “I knew Bridget,” Carlebach told the Forward. “Would I say well? No…. There was never a time when I said, maybe Bridget is upset with us.” Carlebach said that he didn’t know Wildstein “at all,” and didn’t understand why Wildstein would have been angry with him.

In court on Monday, Kelly said that the text wasn’t serious. “It was a continuous conversation about Mendy Carlebach, and banter back and forth about Mendy,” Kelly said. “Traffic problems were something that David, when you spoke to him, it’s what he talked about. Those words went together. And we were just going back and forth.”

For Carlebach, his peripheral involvement in the winding Bridgegate saga remains, more than anything, a source of confusion. “It’s very strange,” he said. “It’s not as if I had the governor’s ear more than any other Jewish leaders involved in different organizations.”

Kelly’s testimony extended through Tuesday. Kelly’s defense is expected to rest its case by the end of the week.