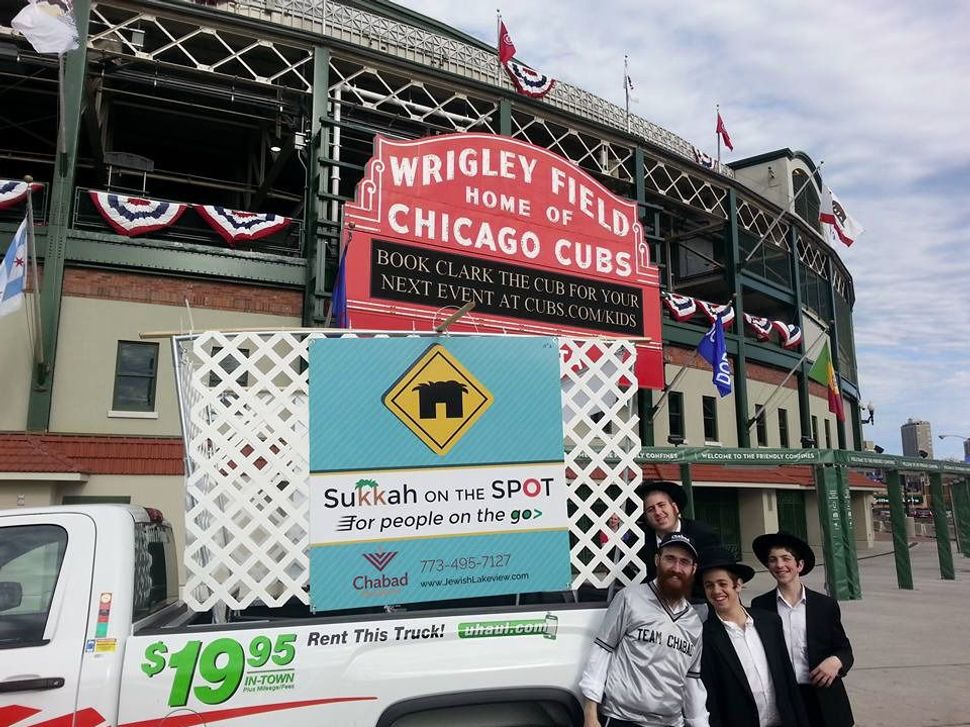 Rabbi Dovid Kotlarsky, an emissary of the Chabad Lubavitch Hasidic movement in East Lakeview, which encompasses Wrigley Field, spent most of the week of the playoffs observing Sukkot. But he did take some time to take his mobile sukkah, mounted on the back of a pickup truck, on a few circuits around the ballpark.

Kotlarsky wore a silver jersey with “Team Chabad” printed on the front and “Rabbi Dovid” and the number 18 on the back.

The Cubs themselves were in Los Angeles, but the fans were still around, and several climbed aboard the truck to join Kotlarsky in waving the lulav and the etrog.

Rabbinically, Kotlarsky told WGN-TV that the lulav and etrog symbolize unity, which is appropriate for the Cubs this year because the team has brought the entire city of Chicago together.

Some fans said a hearty “Go Cubs!” as they brandished the lulav. But that, Kotlarsky says, is not the appropriate moment to bless a baseball team. The best moment, he told WGN, is during the recitation of the Sh’ma, in the silent moment between the end of the prayer and “Amen” where people are encouraged to take a moment for personal prayers.

“Some people think of their elderly parents, their business, their children,” he said. “But I think on a lot of people’s minds today is the Cubs.”

Meanwhile, Judith Sherwin, a lifelong Cubs fan and 20-year season ticket holder, began thinking of golems. Her late husband Byron, a rabbi and novelist, had written a novel, The Cubs and the Kabbalist, about a rabbi who makes a golem that helps the Cubs win the World Series.

Was it possible that any of the 2016 Cubs was a golem? Sherwin briefly considered infielder Javy Baez a likely candidate.

But after thinking it over some more, she decided that Baez was too diabolically flexible in the infield to be made of clay. Kyle Schwarber, though, is stocky and strong and, after spending most of the season recovering from a knee injury, is back in the lineup as the Cubs’ designated hitter—a golem-worthy resurrection.