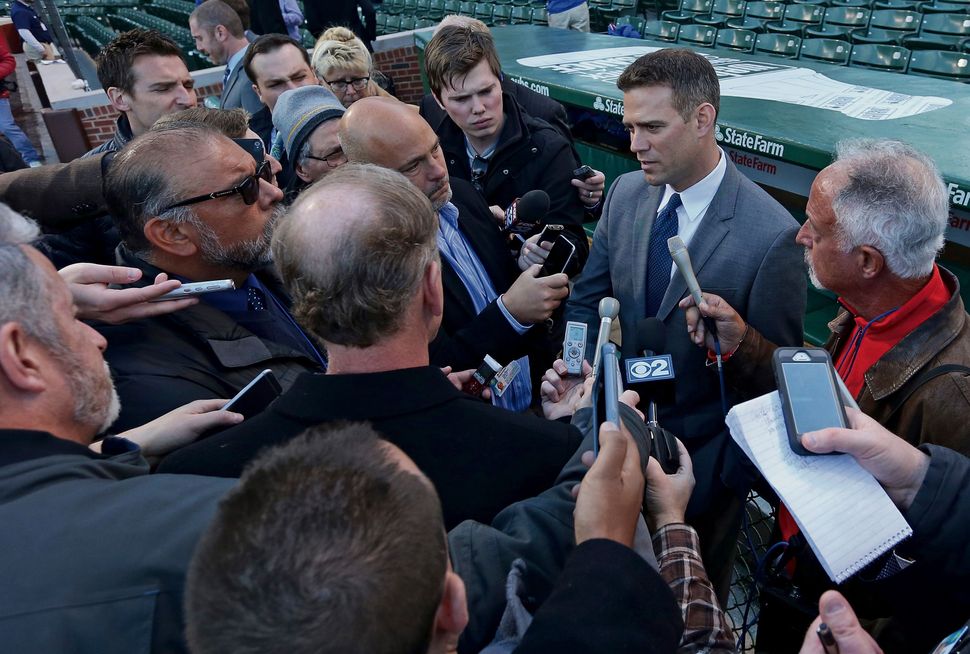 And of course they would be the losing Boston Red Sox and Chicago Cubs.

But, lo, six years into Theo Epstein’s stewardship, the Red Sox won the 2004 World Series, their first win in 86 years. Then, in 2011, Epstein moved to Chicago and declared his plan to rebuild the Cubs. Now, after winning 103 games in the regular season — the most of any team in the majors — his team is favored to win the 2016 World Series.

Still, there’s a reason this article is appearing now, during the first round of the playoffs — as Epstein’s father surmised when pressed for an interview as soon as possible.

“You must be Jewish,” the noted novelist Leslie Epstein responded when I insisted on talking to him about his son right then and there, in case the Cubs collapsed soon. 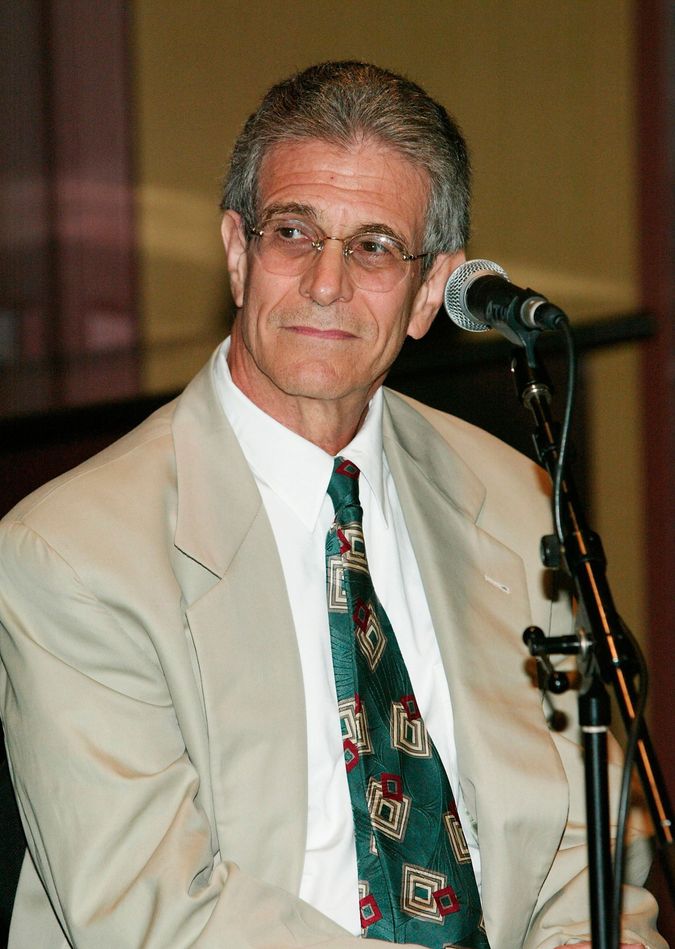 Cubs fans include many non-Jews, of course. But they have the same sort of fatalism. The last time the Cubs won the World Series was in 1908. Some fans attribute their century-plus run of bad luck to an angry bar owner’a curse after his pet goat was barred entry into Wrigley Field to watch the 1945 World Series. But it was, in fact, a Jew who ruined the Cubs’ series that year: the Tigers’ Hank Greenberg, just back from World War II.

In 2003, it looked like the curse might be broken, when the Cubs made it into the postseason playoff. But their playoff fortunes took a dive when a fan in the outfield stands grabbed a long foul ball in the eighth inning, deflecting it from left fielder Moises Alou’s outstretched glove, where it would have marked the second out for the Florida Marlins. The Marlins went on to score eight runs that inning, overtaking the Cubs, who had been leading 3–0 but ended up losing 8–3.

Last year they crumpled again in the National League Championship Series, when the Mets swept them in four games.

Theo Epstein doesn’t believe in curses, his father said: “He believes in statistics and character. The person is the most important thing. The chemistry of the team, the psychology, [is] very important.”

Epstein is known for requiring his scouts to provide extensive dossiers on prospects’ biographies and characters. One of his biggest struggles this season was whether to acquire relief pitcher Aroldis Chapman from the Yankees. The Cubs’ performance against the Mets last fall showed the team was badly in need of a good one, and Chapman fit the bill. But Chapman had been suspended for 30 games this season for allegedly choking his girlfriend and firing a gun in his garage. After a long time agonizing over the choice, Epstein offered Chapman a contract.

For Theo, this was a moral as well as a baseball crisis, his father explained; he refused to make the trade until he’d spoken to Chapman himself. Leslie Epstein considered this part of what he calls his son’s Jewish consciousness. “It’s a quality and a tone,” he said. “It’s hard to describe. It’s… a sensibility, a sense of fairness that’s very Jewish.”

Members of the Epstein clan tend to express their Jewishness through deeds rather than rituals. Theo Epstein’s parents both grew up in assimilated second-generation families. Philip Epstein and Julius Epstein, respectively Leslie Epstein’s father and uncle — and the Cub executive’s grandfather and great-uncle — were prominent Hollywood screenwriters best known for penning “Casablanca,” the World War II anti-Nazi drama starring Humphrey Bogart and Ingrid Bergman. The couple raised their own children in Brookline, Massachusetts, in the same, secular way.

Neither Theo nor his twin brother, Paul, nor their older sister, Anya, attended Hebrew school or had a bar or bat mitzvah. Leslie Epstein never had one, either; he was expelled from Hebrew school, he said, when he showed up on the first day wearing roller skates. When Paul and Theo were 11 years old and Leslie suggested they start Hebrew school, they folded their arms and outright refused. “We’re not going!” Leslie remembers them telling him. “You didn’t go!”

Yet for all this, Leslie Epstein is a novelist who explores his Jewishness deeply through his work. He’s probably best known for his Holocaust novel, “King of the Jews,” about the head of a Judenrat under the Nazis during World War II who creates an authoritarian regime of his own within his ghetto. In lieu of a traditional Jewish education, Theo’s father forced his children to read Jewish books, an assignment they mostly disdained. 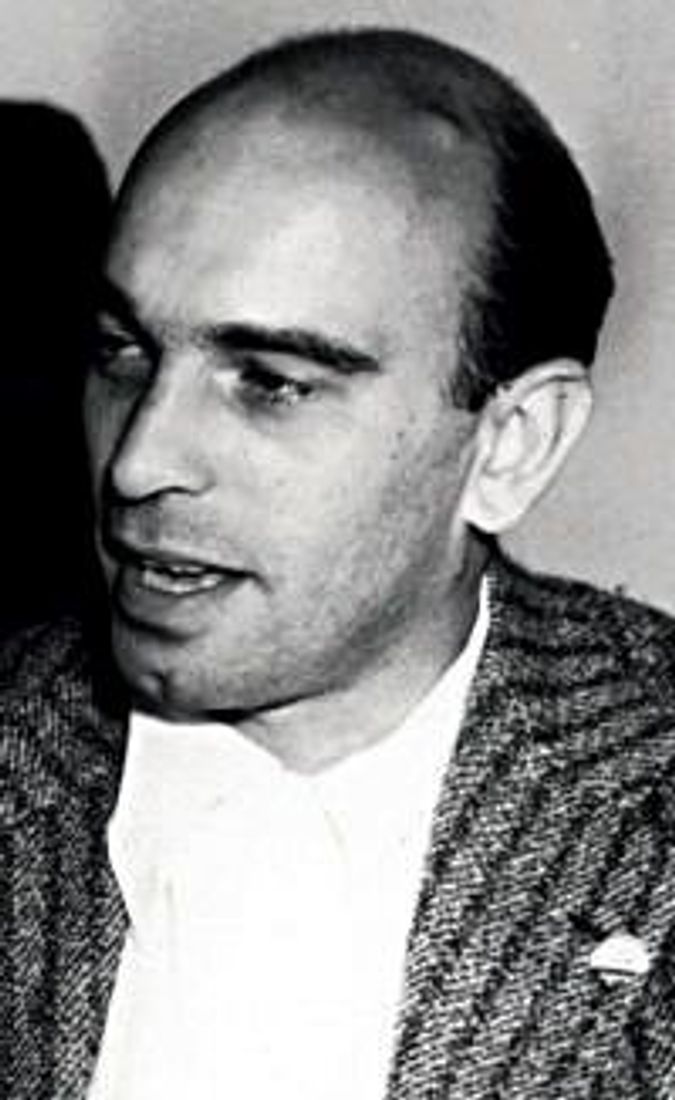 Still, as adults they have manifested their Jewish consciousness through their work. Anya Epstein is a television writer and producer whose work on “Homicide: Life on the Street” and “In Treatment” displays what her father calls “a social consciousness of the highest kind.” Paul Epstein, known as the saint of the family, is a social worker at Brookline High School, his and his brother’s alma mater, and does charitable work for teenagers and at-risk kids in Boston. “I dispute that you need faith to be good,” Leslie Epstein said. “Paul is the best person I know, and he’s an atheist.”

Theo Epstein, his father says, is an agnostic. When he was 6 years old his parents discovered him crying in his room. He had just realized that they would die. No event prompted this; it was a discovery he made on his own. As an adult, he once compared his own internal struggles to Fyodor Dostoevsky’s “Crime and Punishment.” “If I let my brain follow its path unfettered, it would be kinda ugly,” he told ESPN’s Wright Thompson. His father believes he protects this deep sensitivity and awareness of the darkness by building walls, with jokes and with work.

Theo Epstein’s wife, Marie Whitney, is Catholic, and the couple is not raising their own two young sons, Jack and Andrew, with any formal religious training. Leslie Epstein hopes that the boys will absorb some of their fathers’ Jewish consciousness and explore the religion on their own when they grow older.

During his later years in Boston, Epstein considered leaving baseball when his contract was up, and then going to work for a philanthropic organization. Instead, he took the job with the Cubs, which he has described as “a wonderful chance to do something meaningful.” He also formed a charitable foundation with his brother, whom he considers his moral compass. The Foundation to Be Named Later, a play off the language of baseball trades, raises money for college scholarships and partners with nonprofits organizations in Boston and Chicago, notably the Late Night Peace Basketball League, Girls in the Game, and City Year, to reach at-risk kids through sports..

Still, there are some who believe that it wouldn’t hurt if Epstein expressed his Jewishness in a more traditional way. Dovid Kotlarsky is the co-director of Chabad of East Lakeview, the nearest Chabad to Wrigley Field. Since Kotlarsky moved to Chicago from the Crown Heights section of Brooklyn at the beginning of the 2015 season, he and a small group of his fellow Lubavitchers have set up a tefillin stand on Addison Street, across from the ballpark. Once or twice a week, they greet passersby and invite the men to recite the tefillin blessing and the women to light the Sabbath candles. They’ve gotten a good response from the fans, Kotlarsky says, but the one person they really want to pray with is Theo Epstein.

“He’s very hard to reach,” Kotlarsky said. “We want to put on tefillin with him. Man’s power is God’s blessing.”

Kotlarsky denies that any lingering attachment to the Mets on his part was the cause of the Cubs’ collapse during the playoffs last year; as a boy, he says, he preferred to play baseball himself rather than cheer for any professional team. But now that he’s the Chabad rabbi of Wrigleyville, as the surrounding neighborhood is called, he considers it his duty to support the Cubs. “I love the Cubs,” he said. “They have persistence. They never give up.”

Along with the team’s repeated shortfalls, failures and disappointments, it’s a quality that seems to hold a special attraction for the team’s Jewish fans. In 2006, Rabbi Bryon Sherwin, a longtime Chicago native, wrote “The Cubs and the Kabbalist,” a semi-autobiographical novel about a rabbi who attempts to win back the love of his Cubs fan wife by performing a kabbalistic ritual on the pitchers mound at Wrigley Field to lift the curse of the goat.

“Last year was a total surprise and a great ride,” said Judith Sherwin, the author’s real-life wife. “This year obviously has been just a hoot. We do, of course, owe it to his management and his leadership and putting together this organization….Here’s a Jewish boy who looks more like a doctor or a lawyer who might turn out to be the greatest baseball executive of the last 50 years by pulling off miracles with Boston and the Cubs.”

Epstein recently signed a five-year, $50 million extension to his contract with the Cubs, making him the highest-paid executive in baseball. No matter what happens in the next few weeks, Kotlarsky, the Sherwins — and the rest of Chicago — will have him for a while.