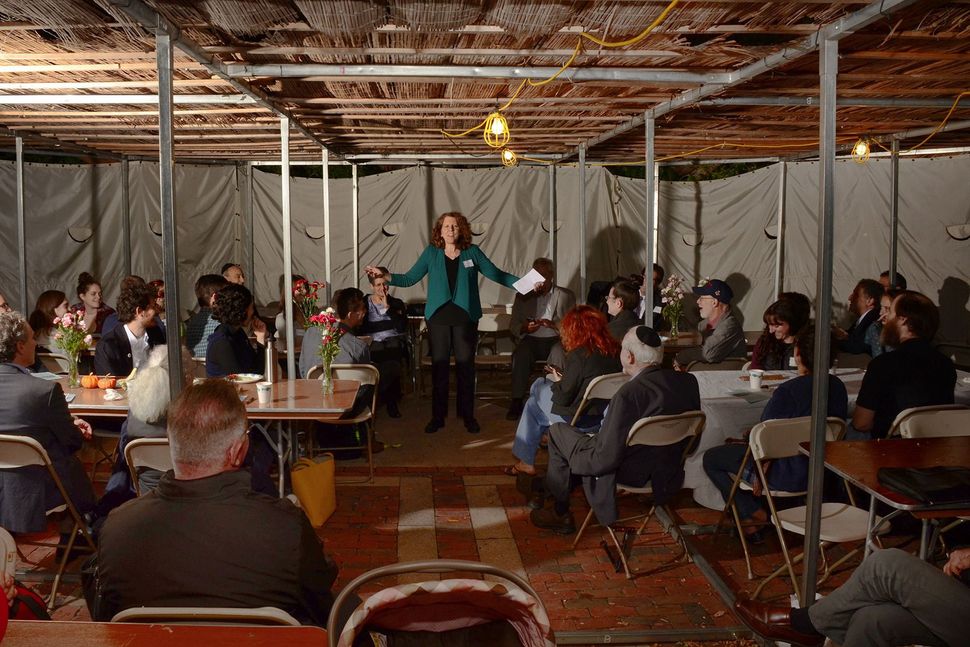 Harvard University dining workers are celebrating a victory after a strike that gained them a $35,000 minimum yearly salary and stable health-care costs in their new contract. And Jewish students on campus are, by and large, celebrating with them after taking a prominent role at the forefront of the push to support their demands.

The three-week strike, which culminated in mass community protests and a walkout from classes on Monday involving hundreds of students, saw Jewish students from across the religious and political spectrum mobilize on the dining workers’ behalf.

In many cases, they mobilized specifically as Jews or cited their Jewish identity as an important factor in their activism.

“I felt like being on the picket line was part of my religious practice during the holidays,” said Gabe Gold Hodgkin, a Harvard junior, who marched with striking members of Local 26 of the union UNITE HERE during the recent Jewish festival of Sukkot. Hodgkin is one of the main organizers for the Student Labor Action Movement, the group that mobilized student support for the strikers. “In the past few years,” he added, “I’ve had to evaluate why I keep doing this work, because it’s hard to keep yourself going. And I’ve come to the realization that a lot of the reasons I do the work come from my Jewish tradition.”

Hodgkin grew up in a Reform congregation in Brookline, Massachusetts. It was a uniquely progressive community that has remained close to the Jewish activist tradition despite the upward mobility of Jews in the 20th century. But even students from more religiously and politically conservative backgrounds saw the strike as an occasion to reassert the links between Judaism and progressivism.

At Harvard Law School, a new group, the Progressive Jewish Alliance, formed in the wake of the strike. According to Hannah Belitz, a third-year law student, its formation reflected “a desire on the part of a number of us to stand in solidarity with students of color and other minority groups in our capacity as Jews.”

In its first action as a group, PJA organized a Yom Kippur-themed fundraiser, asking students to donate to the strikers what they would have spent on food. The group raised more than $1,000 in a week to host a barbecue for the workers.

Hodgkin takes this link further: it was only because of Jewish activism in the 20th century, he argued, that his family could become upwardly mobile and, ultimately, enable him to advocate for workers as a Harvard student: “The reason why my grandfather was able to be a doctor is partly contingent on the labor movement in the U.S., because his family worked in sweatshops in New York City in the early 20th century.”

Last Thursday, the New England Jewish Labor Committee (NEJLC) devoted its annual Sukkot dinner to the strike, inviting dining hall workers to speak about their experiences. Aaron Ducket, who attended with his two daughters, said he struggled to afford health-care for his family. NEJLC has organized Jewish support for labor rights for many decades—it turned out dozens of members to Harvard workers’ rallies during the strike. But in the last few years, said director Marya Axner, interest in its work has expanded alongside the public’s concern with inequality. “Jews were absolutely central to shaping the labor movement in the early 20th century,” she said. As labor declined, Axner continued, so did Jewish involvement in it, but this has been renewed with the coming of age of the current generation of young Jews and their political commitments.

“Allyship is absolutely critical to the sort of presence that we want to have on campus,” said Daniel Levine-Spound, a first-year law student in PJA. The ethos of allyship reflects the view that American Jews have become largely assimilated and financially well off. Now, many students believe, their role is to amplify the voices of people who are struggling, rather than their own.

In other corners of Harvard’s Jewish community, students expressed solidarity with the workers in less ideological terms. Orthodox Jews, who rely on the kosher food at Hillel dining hall, were particularly affected by the strike. And yet Orthodox students’ closeness with the workers in that dining hall made the community especially likely to empathize with their concerns, argued Dani Passow, the Orthodox rabbi at Harvard Hillel.

It’s difficult to take a theological position on the specifics of the labor negotiations—the minimum income demand or medical benefits—said Passow. But the broader question of Harvard’s moral obligations to its workers, he said, is indeed a religious question: “Emmanuel Levinas wrote that you encounter the divine in the face of the other,” he noted. “There’s something about actually encountering someone and seeing their humanity that changes the obligations we have toward each other.”

Passow published a widely shared op-ed in The Harvard Crimson, the only one he’s ever written, calling on students to support striking workers. “For a number of employees I spoke with,” he wrote, “the most difficult part of this labor dispute is that they are surrounded by so much wealth and so many world-class resources at Harvard, not to mention Harvard’s $35 billion endowment.”

Julia Wiener, an Orthodox student, lamented what she views as a lack of active support for labor in her community. She recalled one peer who became angry when students in Hillel gathered for a dine-in—a strike tactic in which students ate dinner outside of Harvard administrative buildings. “In modern Orthodoxy, we tend to focus on problems that affect us,” she said. “As the Orthodox community became wealthier, it didn’t need the labor movement anymore, so it abandoned it.”

But Hodgkin resisted straightforward distinctions between different kinds of Jews. “Of course there’s going to be tension—it’s a strike,” he admitted. “We’ve had a lot of constructive if sometimes contentious conversations within the community. But what’s interesting is that I don’t think it breaks down along denominational lines,” he said. “This goes back to the fact that ultimately this isn’t ideological. It’s about moral conviction, which is something that for a lot of us comes from our religious tradition.”