Finding God — Who’s a She — at the Kohenet Institute 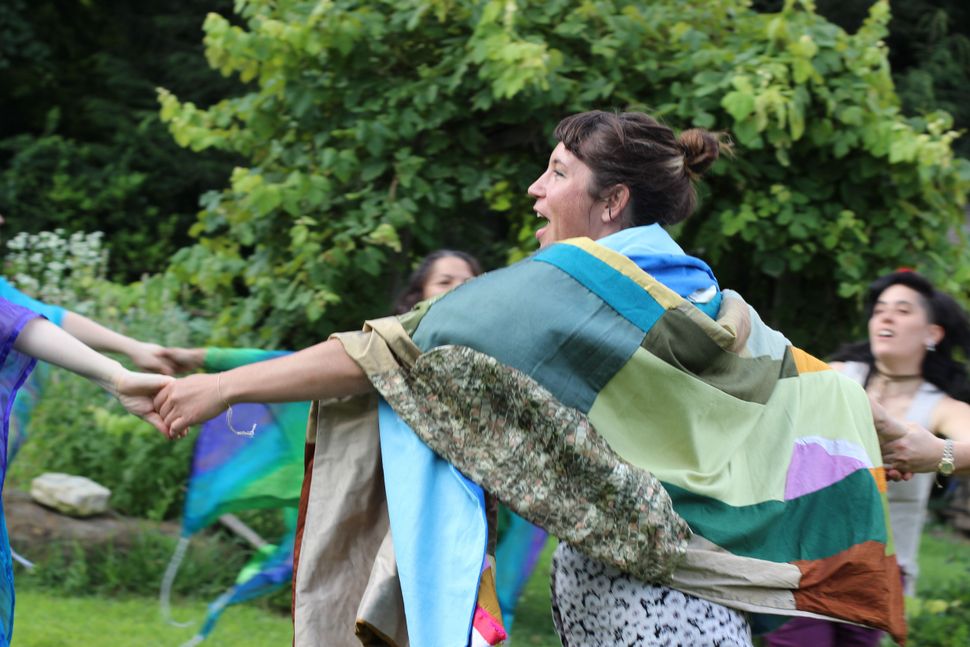 Image by Courtesy of the Kohenet Institute

While leading a prayer session recently, on the eve of the Sabbath, surrounded by a small crowd of other Jews, Kohenet Sarah Chandler picked up her prayer book and prepared to pray.

But something was different. On the cover of her prayer book there was an illustration of a female figure, her body intertwined with two snakes, her arms spreading out like branches of a tree. Leaves sprouted from her head.

And then Chandler began praying, calling to God as a woman. “Blessed are you,” Chandler said, using the feminine conjugations of Hebrew words.

Chandler uses the title kohenet, or priestess, and she is a graduate of an institute that prepares women to become Jewish leaders. It is a modern reimagining of ancient spiritual roles for Jewish women, inspired by the stories of biblical matriarchs and ancient rites that proponents say were long forgotten, or suppressed, by rabbinic Judaism.

“This is about connecting to the divine feminine,” said Chandler, an alumna of the Kohenet Hebrew Priestess Institute, a 10-year-old organization that seeks to reimagine religious ritual and female roles in Jewish life. “We are investigating feminine styles of Jewish leadership.”

The institute and the broader community it seeks to serve — women wanting to connect with earth-based spirituality in a Jewish way — are growing.

While only 40 women have graduated so far, another 50 are currently enrolled with an incoming class of 20. Their impact isn’t necessarily about numbers, though, and has more to do with grassroots influence. Graduates regularly go on to positions of leadership, communal or religious, and bring the lessons they learned while studying here. Recent graduates include a congregational rabbi in Colorado, a youth educator at Eden Village Camp, in New York, and a founding resident of the Moishe House, in London. One woman, who calls herself a “Jewitch,” leads prayer services at OneShul, an online “minyan service.”

The institute also has high-profile advocates. The outsize public figure, and onetime presidential hopeful, Roseanne Barr is a supporter. Barr helped inaugurate a “Women’s Temple for transformation” in Hawaii with Taya Shere, a co-founder of the institute. Rabbi Schachter Zalman-Shalomi, the father of Renewal Judaism, gave the institute his blessing. 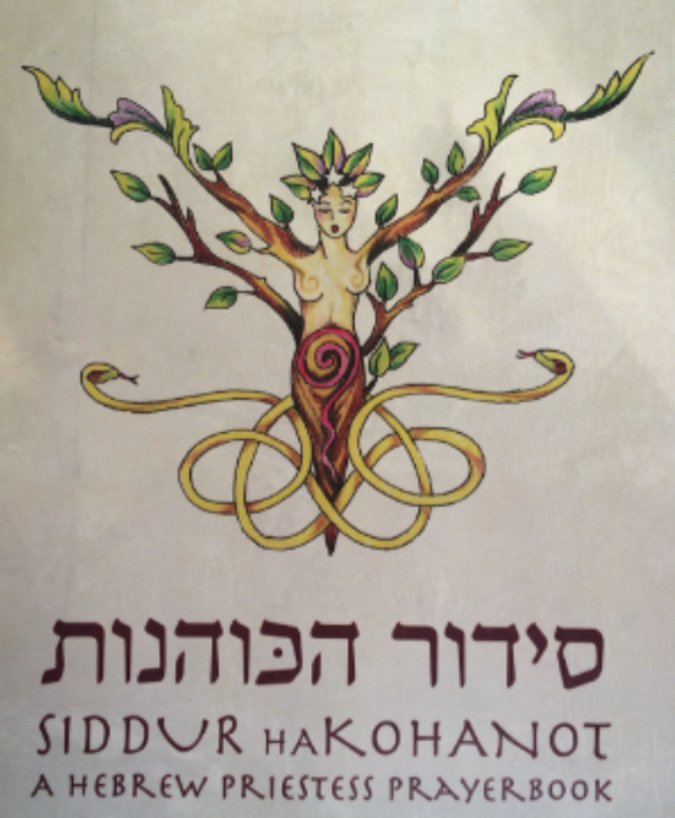 “There is a changing sense of Judaism’s connection to the earth,” said Rabbi Jill Hammer, a co-founder of the institute. Hammer pointed to the rise of ecologically minded organizations and groups like Hazon, Eden Village and the Living Tree Alliance as signs of this shift. “We, among others, have had some impact on Jewish culture in this way.”

The program consists of seven weeklong retreats over the course of three years. Courses are held at either the Isabella Freedman Jewish Retreat Center, in Connecticut, or in California, at the Ananda Meditation Retreat. Each retreat week costs between $1,350 and $1,980.

The training program is divided into two tiers, or cycles.

At the first cycle of training retreats, women combine Jewish resources with other ritual skills based on what the group calls “13 archetypes of the ancient Hebrew priestesses.” These archetypes include maiden, midwife, prophetess, mother, wise woman, shamaness, lover and fool. Women study what the institute has identified as Biblical archetypes — including “Maiden,” “Fool” and “Seeker.” Image by Kohenet Institute

Later on in their training, students focus on “lifecycle ritual skills,” such as birth and naming ceremonies, coming-of-age and wedding rituals, and funeral and death rites. They may learn how to make and use amulets, or lead “embodied Torah readings” — which may include dancing, re-enactments of portions or reading the Torah scroll outdoors.

Hammer, a graduate of the Conservative Jewish Theological Seminary, said she always felt like something was missing from her Jewish education. The students spoke regularly about the great patriarchs in synagogue, and they always addressed God as Lord, as a father. But where were the women?

“The history of the divine feminine, of experiencing God in female mode… had not been a part of my education, I began to wonder whether there was a place in Jewish life for these things to be part of the Jewish story,” Hammer said.

In recent years there has been a broad resurgence in Goddess worship, not only in Judaism.

“There is an increasing interest in Goddess [spirituality] in general,” said Judith Laura, author of “Goddess Matters: The Mystical, Practical & Controversial.” “So people in Judaism were saying: ‘So what about my religion? Is there anything there was repressed?’”

Hammer was one of many seekers. She connected with Shere, who had already been studying Brazilian religious culture. They both were seeking to find a Jewish way to explore female leadership roles as well as Goddess worship. 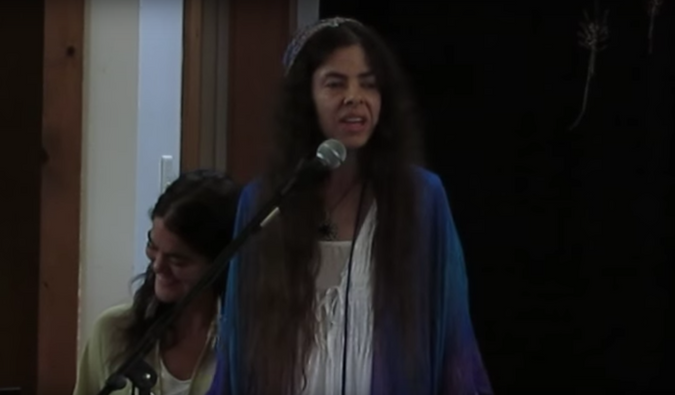 Rabbi Jill Hammer, a founder of the Kohenet Institute, speaks at an ordination ceremony in 2013. Image by YouTube Screenshot

In 2006 they held their inaugural meeting of the institute at Elat Chayyim, an institute of the Jewish Renewal movement. Jewish Renewal is a Jewish response to the countercultural 1970s and is very open to rethinking Jewish practices and ritual.

Hammer and Shere had tapped into something. There was a whole world of women out there, hailing from all over the country, who wanted something more from Judaism. Many of them gathered in online forums and talked about how they could reclaim spiritual roles: Could they call themselves witches? Priestesses? Healers?

It was about not only ordaining female rabbis, but also rethinking gender and Jewish prayer.

“The idea that, ‘Oh, women can just turn off everything to do with their feminine side and just copy the thing men are doing’ is extremely limiting,” Chandler said.

Many of the founding board members and current students participate in other forms of practice as well, and the movement is deeply influenced by forms of Neopaganism, a religious movement inspired by premodern religious culture, which has also seen a rise in popularity. One woman studied with the Yoruba; others have study Buddhism, Hinduism or Native American rituals.

“As a kohenet I focus on an embodied, woman-honoring form of Jewish spirituality that respects the earth,” one graduate, known as Kohenet Ketzirah, offered on her personal blog. “The women trained and ordained as kohanot are reclaiming this word and a unique role as spiritual leaders.”

To be sure, the priestesses’ approach has come under fire from some rabbis.

In 2010, Rabbi Daniel Nevins, dean of the Jewish Theological Seminary’s rabbinical school, where Hammer received her ordination, said that the institute was not “compatible with Jewish belief and practice.”

And Rabbi Moshe Tendler, a dean of the seminary at Yeshiva University, had even more dramatic words, telling a Tablet Magazine writer that Jews who embrace such earth-centered rituals are “perverts.”

Indeed, the worship of God as a woman, is “risky,” said D’vorah Grenn, former chair of the women’s spirituality master program at Sofia University, in Palo Alto, California.

“This is a risky thing because it is regarded by so many people as idolatrous to talk about the female face of God,” said Grenn, who was involved in the founding of the institute and also uses the title kohenet. In a paper titled “Claiming the Title Kohenet,” Grenn calls the “re-emergence of the Jewish priestess” among the most exciting trends in both “feminist spirituality and Jewish religious practice today.”

“I was taught there is no such thing as Jewish magic,” Grenn said, “but here it is.”

Finding God — Who’s a She — at the Kohenet Institute