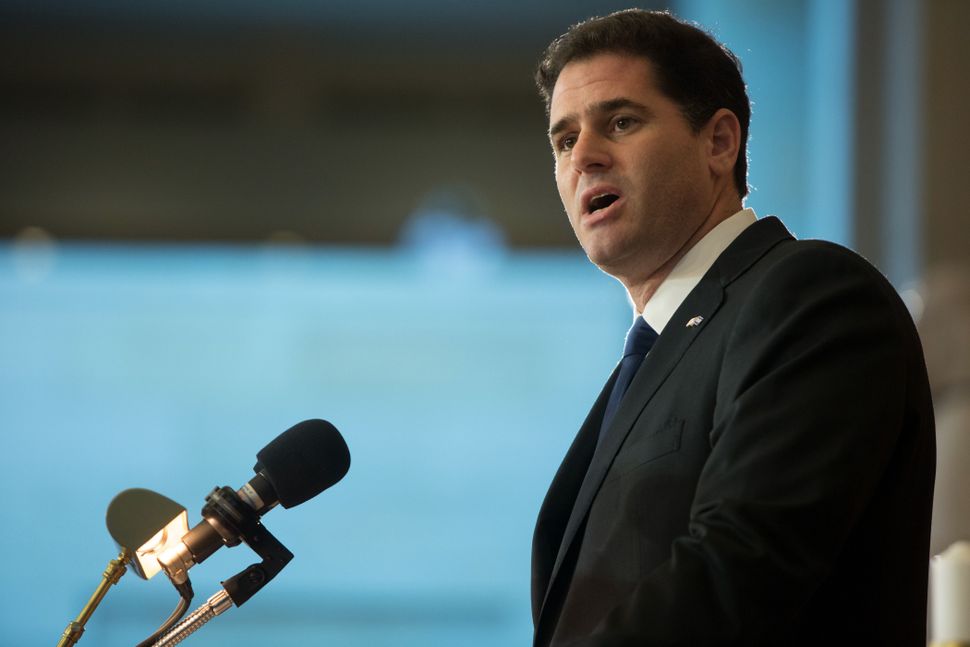 The Center for Security Policy, which will be honoring Dermer with a “Freedom Flame Award,” is included in a watch list of hate groups compiled by the Southern Poverty Law Center, the SPLC told the Forward.

Dermer is slated to accept the award a December 13 dinner. Morton Klein, president of the Zionist Organization of America, is also listed as a recipient.

The CSP was founded in 1988 by Frank Gaffney, a former Reagan administration official. According to the SPLC, the group was once “a respected hawkish think-tank focused on foreign affairs” but is now “a conspiracy-oriented mouthpiece for the growing anti-Muslim movement in the United States.”

The CSP has warned against what they say is the threat of sharia, or Islamic religious law, poses to American democracy.

“For the past decade, CSP’s main focus has been on demonizing Islam and Muslims under the guise of national security,” the SPLC writes.

The Anti-Defamation League has also criticized the Center as a promoter of anti-Islamic conspiracy theories..

J Street, a left-leaning pro-Israel group, called on Dermer to decline the honor, calling CSP “an organization that traffics in repulsive Islamophobia.” In a statement, J Street said “We call on Ambassador Dermer to decline this award and to condemn the dangerous activities and views of the CSP and its president and founder, Frank Gaffney.”

Itai Bar-Dov, spokesman for the Israeli embassy in Washington, told Haaretz that Dermer was “not aware of any anti-Muslim views held by the Center for Security Policy and would not endorse any such view.”

Instaed, Bar-Dov told the Israeli newspaper that Bar-Dov greatly appreciates the Center for Security Policy’s longtime support for a strong and secure Israel.”

Dermer has “made it clear through dozens of public speeches that Islam is not the enemy.”

“Accepting this award does not mean that the Ambassador subscribes to every point of view expressed by individual members of the Center, as would be true of any other organization.”