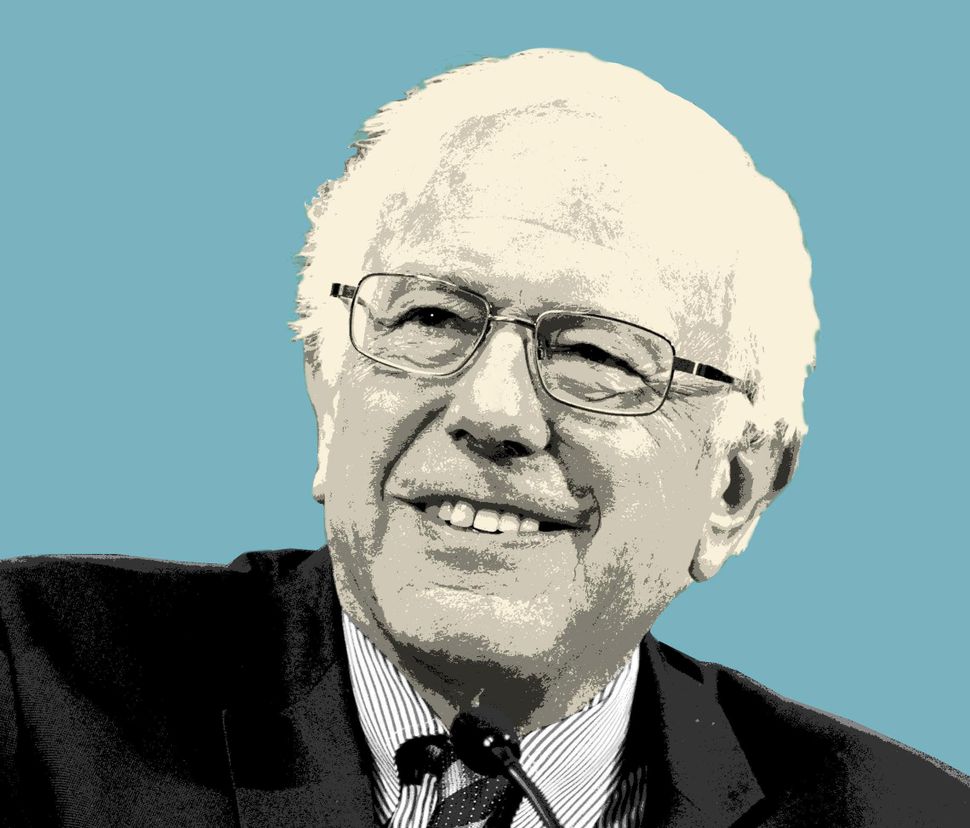 The Jewish Vermont senator, the progressive champion who lost the presidential primary race to Hillary Clinton, is one the first senior Democrats to bounce back after November 8 and plot a way forward for the embattled party.

Sanders is pushing to clean house at the Democratic Party to correct what he sees as the Clinton-inspired flaws that allowed Donald Trump to win a shocking victory.

But some of his supporters may have bigger plans for the liberal icon. T-Shirts being sold online feature Sanders’ picture with the slogan: “Hindsight is 2020,” a jab a Democrats who had thought only Clinton could beat Trump and hint that next time around, Sanders should be given a second look.

Sanders, who will be 79 years old when its time for the next presidential elections, did not rule out the possibility. Four years is a long time from now,” he told AP “We’ll take one thing at a time, but I’m not ruling out anything.”

Answering the same question on CNN Sanders again sought to leave the door open. ”The last thing in this world in this never-ending campaign we have not even sworn in this president is to talk about 2020,” he said. “Let’s not go there at all.”

But Sanders is more than willing to go other places in order to prepare his party for 2020. His main goal now is reforming the Democratic Party from the inside, and his first step in reaching it is by installing a new Democratic National Party chair more in line with the progressive wing of the party.

Sanders has been winning support for his proposal to elected Minnesota Rep. Keith Ellison, the first Muslim-American in Congress, as successor of Debbie Wasserman Schultz who was forced out after Wikileaks published emails showing a DNC pro-Clinton bias during the primaries. On Friday he won the backing of Senator Chuck Schumer, who will soon assume the role of Senate Minority Leader.

“What we want to do is clean the house in the DNC, which means removing the Clinton allies,” said Charles Lenchner, a Jewish progressive activist and co-founder of the pro-Sanders group People for Bernie. “People need to understand that Hillary Clinton was the leader of the party. She failed, and now we need an alternative leadership.”

Lenchner, who believes the Democratic Party under Clinton was “blind” to American’s “thirst for a candidate offering change” is not sure, however, that Sanders, who galvanized the progressive camp during the primaries, can carry it to victory in 2020. “It seems kind of odd given how old he is,” he said.

“Bernie Sanders was a bizarre candidate,” added progressive Jewish activist Isaac Luria. “He’s a socialist from Vermont, after all.” Luria believes that while Sanders is unlikely to run again, the next candidate to lead Democrats into the 2020 elections should be shaped by the Sanders mold. “If you don’t have a left wing populist, you get a right wing populist,” he said.

“I’d be happy to see Bernie run again and to support him,” said Daniel Sieradski, who started Progressive Jews PAC.

Sieradski did complain that Sanders’ 2016 team lacked have the ability to run a national campaign. As an example, he points to the campaign’s botched effort to reach out to Jewish voters during the primaries. Sanders hired Simone Zimmerman, an outspoken critic of the Israeli government’s policies, to be Jewish outreach director shortly before the New York primary, only to dump her after controversial statements about Benjamin Netanyahu came to light.

Frustration is ripe among Sanders supporters. Not only are they angry at the results of the presidential elections, they also feel these results make it clear that Sanders was wrongfully portrayed as a candidate unable to win national elections.

“Democrats must now ask themselves: Who would have been a better representative for the party in that region?” wrote Fredrik deBoer in the Washington Post. “The millionaire from New York with an entourage of celebrities and the backing of the Democratic money machine? Or a small-city New Deal granddad from Vermont who has spent his political life working with unions and appealing to economic justice and populism?”

Similar to Trump’s argument against a “rigged” political system, Sanders supporters still view the Democratic Party and the process in which recent primaries were conducted as biased against their candidate. Some fault Wasserman Schultz and the DNC, while others say top Democratic consultants were deterred from working with Sanders after being threatened by the Democratic establishment that joining Clinton’s rival would bar them from playing a role in a future Democratic administration.

Since Trump’s election, Sanders has highlighted his rejection of Trump’s “racist, sexist, xenophobic and anti-environment policies.”

But he also the similarities in the campaigns both he and Trump ran — a subtle jab a the opponent they shared in Hillary Clinton.

“Donald Trump tapped into the anger of a declining middle class that is sick and tired of establishment economics, establishment politics and the establishment media, Sanders said in his post-election statement’ promising that “to the degree that Mr. Trump is serious about pursuing policies that improve the lives of working families in this country, I and other progressives are prepared to work with him.” Sanders is up for reelection in two years. At the age of 77 he will have to decide whether to stay in politics and seek another 6-year Senate term. The decision will also be impacted by his intention to run again for presidency two years later.

But even if the promise on the pro-Sanders T-shirt doesn’t come true, the progressive wing led by Sanders is now well positioned to make its mark on the party. Not only in an “I told you so” moment, but also in shaping the party, it’s next leader, and its base of support, including those in the Jewish community who are part of it.

“The mainstream Jewish community will gave to have their own accounting,” said Luria. “There are too many of us in the community that are in line with the financial establishment.”