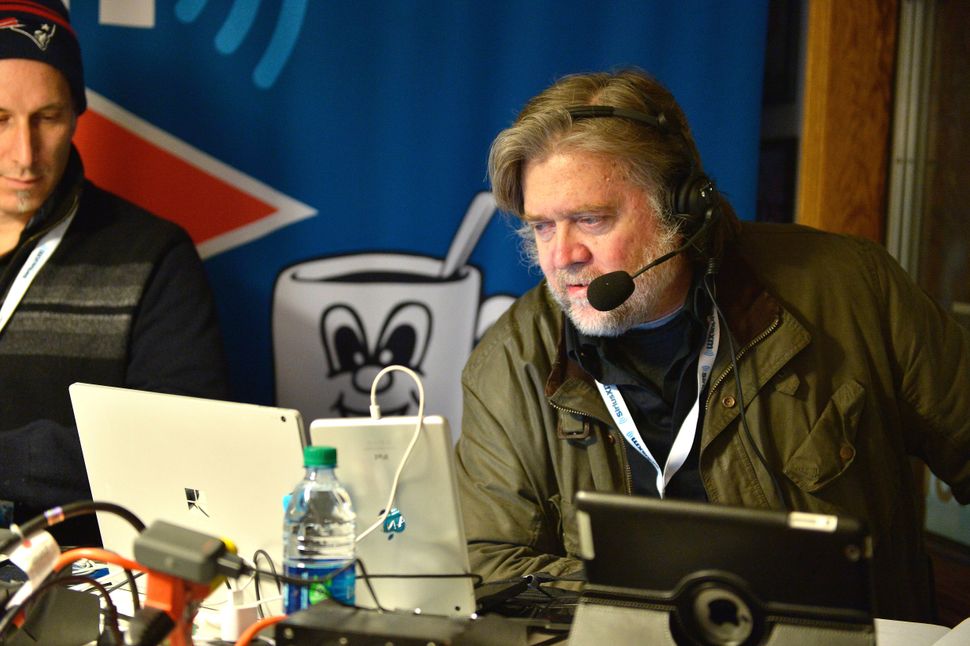 Donald Trump has named Breitbart’s chairman, Steve Bannon, as a chief strategist for his administration.

During the election, Breitbart was the most outspoken pro-Trump news organization out there. The conservative new organzation is linked to the “alt-right,” and publishes anti-Semitic and Islamophobic articles.

So how have they covered the first week of president-elect Trump? What are there takes on liberals, the media, women and Bannon?

Here are 7 of the most shocking examples we could find.

No surprise here, Breitbart doesn’t agree with the anti-Trump protests happening all over the country.

“The democratic election of Republican Donald Trump to the U.S. presidency has trigged a bizarre backlash against America’s free and fair election in the radical leftist communities native to the country’s big cities.”

“A radical minority of Americans seek to use organized flag burnings to galvanize opposition to the peaceful transition of power.”

“Fake reports of ‘hate crimes’ committed by fans of President-elect Donald Trump are sweeping the nation,” Breitbart reported on Sunday.

“The wave of anti-Trump crimes — ‘hate crimes’ and otherwise — committed by anti-Trump thugs overwhelms, by several orders of magnitude, whatever crimes are being attributed to Trump supporters.”

“The narrative about a wave of ‘hate crimes’ inspired by Trump is a deliberate fabrication, meant to tarnish the President-elect. It is a continuation of false accusations, during the campaign, that Trump represented the second coming of Hitler.”

“It is an attempt to organize a new opposition, based on lies, and the deliberate sowing of mistrust at a time when Americans have been called — by both presidential candidates — to come together.”

Safety pins are for babies

In the days since the election, you might have seen people wearing safety pins. The movement started in Great Britain after the Brexit vote, and it’s meant to show immigrants, Muslims or other groups under attack by Trump and his supporters that people wearing the pin stand in solidarity with them.

Breitbart calls these people “Red Diaper Babies,” writing “safety pins were once associated with diapers, and were ubiquitous in the age before disposable diapers.”

“Many anti-Trump celebrities have taken to wearing safety pins. […] ‘Explainer’ website Vox.com is also promoting the safety pin as an anti-Trump symbol. Curiously, it avoids explaining the use of safety pins in an earlier age of child-rearing.”

Trump critics are behind death threats — to themselves

In a piece about the California legislature promising to fight for Democratic values and stand up to Trump, a Breitbart columnist claims that Democrats are the ones responsible for the recent spurge in violence and death threats.

The byline lists the author as Assemblyman Tim Donelly, although it’s worth pointing out that Donelly lost his seat in 2014.

“It’s not Trump supporters that are issuing death threats via Twitter. (Last time I checked, that was illegal, but don’t expect Obama’s Secret Service or FBI to do anything about it.)”

“It’s not Trump supporters that have worked themselves up into a frenzy in the streets over the peaceful transition of power from one President to another.”

“It’s not Trump supporters advocating violence all over social media and in the streets.”

“We’re all at work—working to pay taxes so these loafers can spend the day advocating our murder.”

The article goes on to say “it’s a good thing that all the angry protestors live in ‘gun-free’ blue sectors of the country,” because they wouldn’t have any self-control if they had access to guns.

“Maybe that’s why they hate guns so much—because they don’t trust themselves. […] Because when they compare those of us who believe a country should have borders to restrict access, and a Constitution to restrict government, to Hitler, Mussolini and Stalin, calling us fascists and Nazis, what they’re really doing is dehumanizing their ‘enemy.’”

“They’re so brainwashed, they don’t realize that they and their leftist idols are the incarnation of all the very things they claim to fear.”

Don’t worry about your birth control

Amid fears that Trump will repeal Obamacare and therefore cut access to free or cheap birth control, feminist groups and women’s magazines like Elle are suggesting women to get IUDs before January.

Breitbart’s take on this? “Elle attempts to convince its readers that the pain of having an IUD inserted is nowhere near that of looking toward a Trump-Pence administration.”

“Leftwing feminist writers are distraught at the thought that women may have to open their own wallets to purchase their own birth control. Birth control, however, can cost as little as under $10 per month when savvy women consumers use websites such as GoodRx and WeRx to scout out the best prices and coupons.”

You should have trusted our polls

In an article called “Ten Takeaways form the Trump Revolution 2016”, Breitbart writes about liberals not trusting their polls.

“Meanwhile, the elite have finally discovered, to their dismay, that all those ‘bitter clingers’ and ‘deplorables’ have minds of their own. As journalist Ron Brownstein noted, Trump won working-class white voters by a wider margin than did Ronald Reagan. And those folks in the middle have distinct opinions on such issues as immigration, law and order, and trade that are much different from those of their self-appointed bi-coastal betters.”

“Moreover, we can observe that while this smug culture of incomprehension and condescension has been a characteristic of the left, it can also be observed, in milder form, on the right. That is, many Republicans, perhaps even today, just can’t quite believe that Trump stands for anything more than reality-TV showmanship. Yet as anyone who reads Breitbart, for example, knows, serious thinking has been going on about what a populist-nationalist center-right coalition might look like, even if the familiar DC think-tanks haven’t been interested.”

Stop hating on our man Bannon

Trump’s announcement that Breitbart’s chairman, Steve Bannon, would be a chief strategist for his administration, was followed by a lot of backlash by Republicans and Democrats alike.

On Breitbart, contributor David Horowitz described this “anti-Bannon hysteria” as “more evidence the left has lost touch with the American people” in an article on Monday.

“The losers of the left have worked themselves into such a bizarre hysteria over the fact that they lost the White House that they have lost all connection to reality and are now hyping their most ludicrously paranoid fantasies.”

“The function of this lunacy is to put off the inevitable moment when they are going to come back to Earth and reckon with the fact that they were horribly wrong and the American people have rejected them. For them, Stephen K. Bannon is the straw man of the hour.”