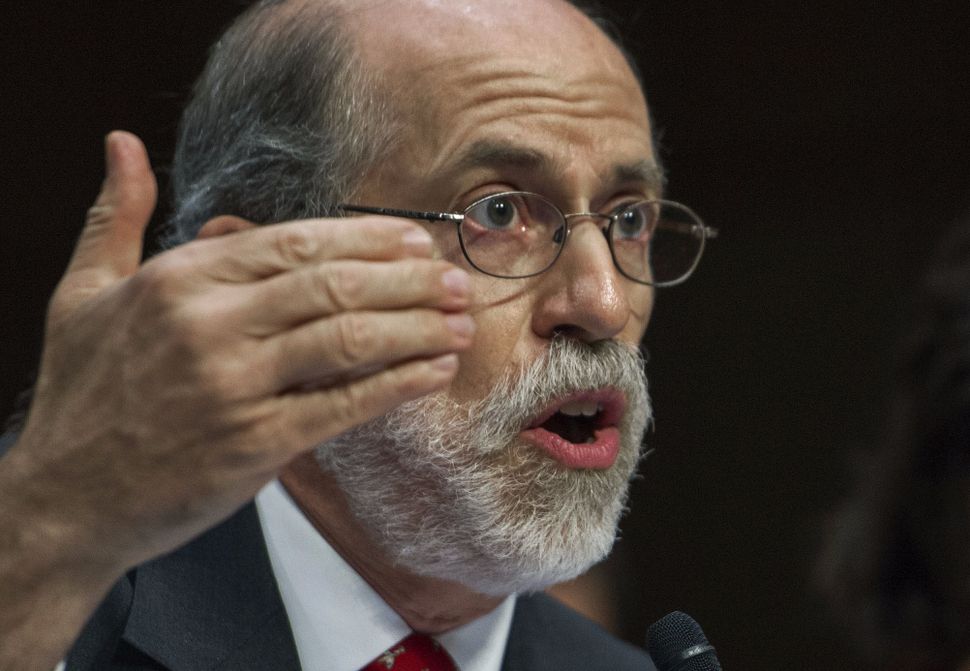 Frank Gaffney, whom the Southern Poverty Law Center calls “one of America’s most notorious Islamophobes” is reportedly being eyed for a spot on Donald Trump’s transition team on national security issues.

Gaffney is a former Reagan administration official and the founder of the Center for Security Policy, an anti-Muslim think-tank. In a March 2016 profile in New York Magazine, he was dubbed the “Joe McCarthy of Islamophobia.”

Both the Wall Street Journal and the New York Times reported that Gaffney has taken on a bigger role with the transition team since Trump’s two main national security advisers were fired over the weekend.

“Having Gaffney as an adviser is very troubling because he’s known to be (an anti-Muslim) conspiracy theorist,” said Rabbi Jill Jacobs, the executive director of Tr’uah, a human rights organization for Jewish clergy. “There’s already deep fear in this country that he will try to make Muslims register, which brings up a traumatic history for Jews.”

“(It) does not instill confidence that Trump wants to be president for all people and bring unity to the country,” Jacobs told the Forward.

Her sentiment was shared by Ben Ami from J Street. “We are adamantly opposed, and would urge the president elect to reconsider the appointment of any person with the track record that Frank Gaffney has on Islamophobia, and the bigoted, racist things that he’s said,” Ami told the Forward.

At the beginning of November, a group of 100 rabbis and interfaith leaders wrote a letter protesting the invitation for Gaffney to speak in a synagogue near Boston.

“At a certain point, you realize that you need to call out inappropriate behavior,” said Rabbi David Lerner president of the Massachusetts Board of Rabbis and one of the organizers of the letter. “I think the time had come to say this is embarrassing for us as Jews.”

At the time, the Muslim civil liberties group CAIR organized its own demonstration outside of the synagogue.

Among the theories that Gaffney has espoused:

Gaffney is a strong supporter of Trump’s proposed ban on muslim immigration. In fact, when Trump announced his idea he quoted a debunked statistic from Gaffney’ Center for Security Policy (CSP).

Yet, at the same time Gaffney seems to be on good terms with right-wing forces in and regarding Israel.

Mort Klein, the president of the right-wing Zionist Organization of America, told the Forward, “Frank Gaffney is one of the most fervent, articulate pro-Israel Zionists who I have ever known. As a friend of Israel, there is no one better.”

Asked about Gaffney’s connection to Trump, he said, “If he was in the position to advise the Trump administration on the Arab war against Israel, that would be great.”

Earlier this month, it was revealed that CSP plans to honor both Klein and Israel’s ambassador to Washington Ron Dermer with their annual “Freedom Flame Award.”

An Israeli embassy spokesman told Haaretz that Dermer was “honored” to receive the award and that he greatly appreciated CSP’s “longtime support for a strong and secure Israel.”

Following that, the reform movement and other liberal Jewish groups including the Anti-Defamation League and J Street urged Dermer not to accept the award.

“To associate Israel with such a group doesn’t just reveal poor strategic thinking,” the New Israel Fund said in a statement. “It damages Israel’s standing in the global community and its ability to relate to the predominantly-Muslim nations that surround it. It shows an abandonment of the values of pluralism and religious freedom Americans and Israelis hold dear.”

So far, the Trump campaign has denied that Gaffney is working with them. During an interview on MSNBC Wednesday morning, Trump spokesman Jason Miller said that Gaffney is not advising the transition team.

But sources close to Gaffney insist he is in the loop.