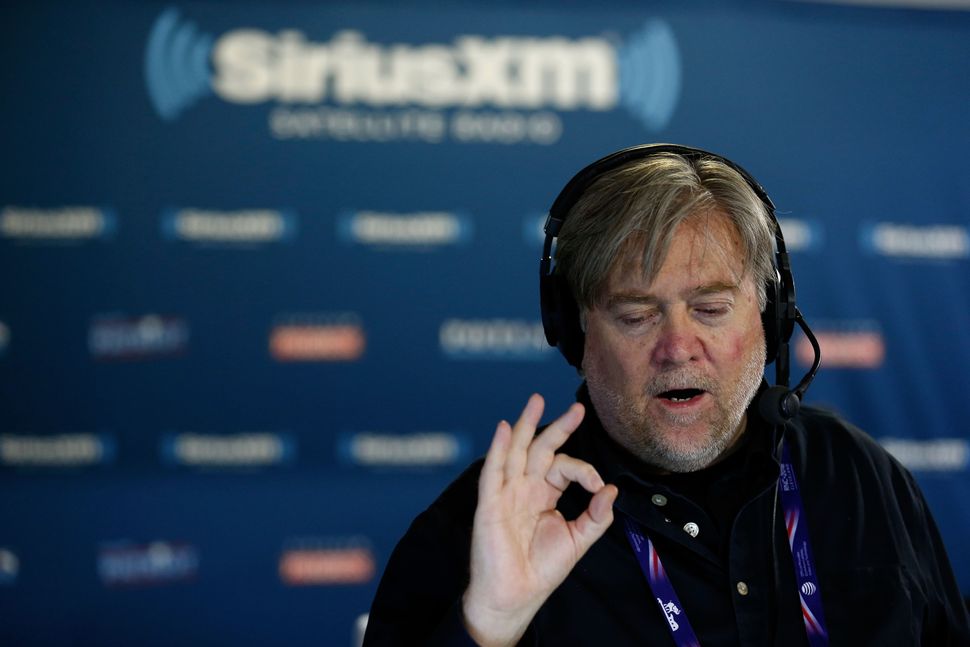 In the two recent interviews Steve Bannon has given since becoming Donald Trump’s chief strategist, the former editor of Breitbart News railed against the “global elite” and insisted that he was not a “white nationalist,” despite media reports depicting him as such.

In an interview with the Wall Street Journal, Bannon asserted that, though sympathetic to right-wing nationalist movements in Europe, is not a proponent of “ethno-nationalism.”

Bannon has called Breitbart News a “platform of the alt-right” but appears now to be delicately distancing himself from some of the beliefs of leading alt-right thinkers.

Here are a few takeaway quotes from his recent interviews:

1. “Like [Andrew] Jackson’s populism, we’re going to build an entirely new political movement,” he told the Hollywood Reporter. “It’s everything related to jobs. The conservatives are going to go crazy. I’m the guy pushing a trillion-dollar infrastructure plan. With negative interest rates throughout the world, it’s the greatest opportunity to rebuild everything. Ship yards, iron works, get them all jacked up. We’re just going to throw it up against the wall and see if it sticks. It will be as exciting as the 1930s, greater than the Reagan revolution — conservatives, plus populists, in an economic nationalist movement.”

2. “The media bubble is the ultimate symbol of what’s wrong with this country,” he told the Hollywood Reporter. “It’s just a circle of people talking to themselves who have no f—ing idea what’s going on. If The New York Times didn’t exist, CNN and MSNBC would be a test pattern. The Huffington Post and everything else is predicated on The New York Times. It’s a closed circle of information from which Hillary Clinton got all her information — and her confidence. That was our opening.”

3. “The globalists gutted the American working class and created a middle class in Asia. The issue now is about Americans looking to not get f—ed over. If we deliver, we’ll get 60 percent of the white vote, and 40 percent of the black and Hispanic vote and we’ll govern for 50 years. That’s what the Democrats missed. They were talking to these people with companies with a $9 billion market cap employing nine people. It’s not reality. They lost sight of what the world is about.”

4. “Breitbart is the most pro-Israel site in the United States of America,” Bannon told the Wall Street Journal. “We’ve been leaders in stopping this BDS movement in the United States; we’re a leader in the reporting of young Jewish students being harassed on American campuses; we’ve been a leader on reporting on the terrible plight of the Jews in Europe.”

6. Bannon has never been one to shy away from power, either, he said. He revels in it. He told the Hollywood Reporter: “Darkness is good… Dick Cheney. Darth Vader. Satan. That’s power.”