Did CNN Make Alt-Right Normal With ‘Are Jews Human’ Banner — or Warn of Dangerous Reality? 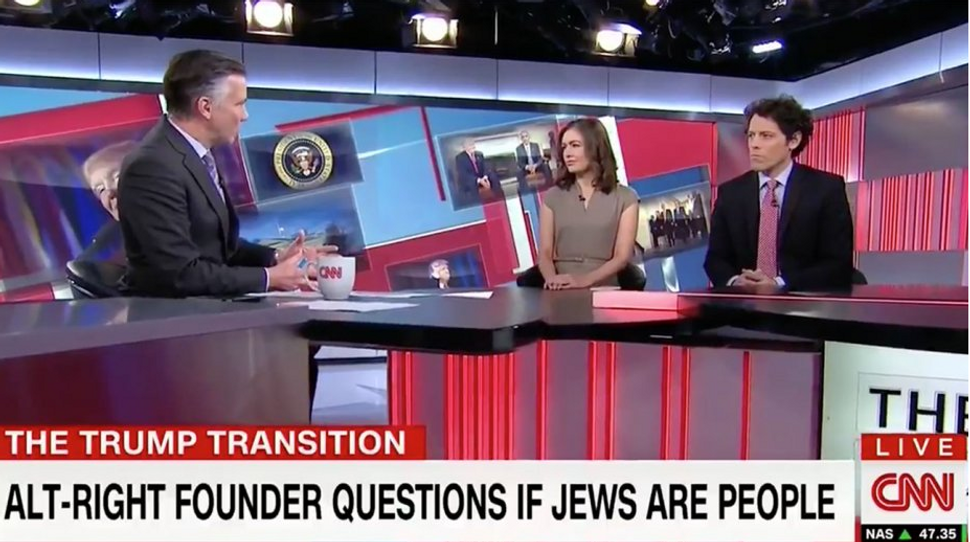 Critics reacted on Monday night after CNN displayed an on-air headline seen as pandering to white nationalists and supremacists, stirring concern that the “alt-right” could be mainstreamed or normalized.

“Alt-right founder questions whether Jews are human,” the text read, while anchor Jim Sciutto discussed with two guests a Washington, D.C. ‘alt-right’ conference at which one speaker, Richard Spencer, questioned the personhood of Jews.

“One wonders if these people are people at all, or instead soulless golem,” Spencer, head of the white nationalist National Policy Institute and coiner of the term “alt-right,” said about Jews, referring to the monsters of Yiddish folklore. Participants at the confab also used Nazi slogans and salutes.

Sciutto and his interviewees denounced those remarks and that behavior in their on-air discussion — and did not have control over the headline — but the episode nonetheless brought ire to the network, both from within and without.

Hadas Gold, a writer at Politico, mocked the chyron on Twitter, writing “pinches self i’m real! i’m a person!” Maia Efrem, an ex-Forward staffer and editor at Refinery29, posted a photo of the television with the offending headline on the screen, opining, “This just happened on @CNN: Are Jews People?”

Sciutto and CNN’s head political correspondent, Jake Tapper, also weighed in on the social media site. “The chyron was abhorrent and I am trying to deal with it. Obviously I take responsibility but my being off is not irrelevant,” Tapper wrote. “I agree with @jaketapper fully however that the banner – which we don’t write from the chair – was out of line,” Sciutto added.

The rise of Donald Trump and the “alt-right” — a motley collection of white supremacists, white nationalists, fellow travelers and trolls — has put traditional news organizations in a bind, with many wondering how to resist “normalization” — covering political reality without treating statements that verge on sexist, racist and xenophobic like business as usual.

Some outlets have tried to resist the “normalization” tendency, vowing to cover the ‘alt-right’ and the president-elect in a fact-based, hard-nosed manner. Al Letson, host of the Center for Investigative Reporting’s “Reveal” radio program embraces that strategy, recently conducting a tough interview with Spencer in which he confronted the “alt-right” luminary over his descriptions of racial conflict and call for a white “ethnostate.”

“It was important to dive in and see what he was about,” Letson told the Forward in an interview. “Ideas like his, when they’re left in the dark, that’s when they became dangerous.” Referring to the White House appointment of ex-Breitbart News chief Steve Bannon, he added, “They’re not fringe, they’re part of the government now.”

Slate, the Internet news magazine, has been soliciting donations for its work under a similar anti-normalization logic. Jacob Weisberg, Slate’s editor-in-chief and host of “Trumpcast,” a podcast critical of the President-elect, sounded those themes in a recorded appeal for contributions. “Slate is one of the few media organizations that you can really count on to stand up to Donald Trump and hold him accountable. We’re going to keep telling the truth about him, and resisting the pressure to normalize his terrible behavior,” he said.

Jeff Zucker, the president of CNN, echoed those remarks in a recent media dinner. “We will hold the new administration’s feet to the fire. And they should respect that, even if they don’t welcome it,” he told the room, according to the network. Christiane Amanpour, a correspondent for CNN, struck much the same tone, urging colleagues to “re-commit to robust fact-based reporting” and hold the line “against the normalization of the unacceptable.”

According to Jeff Jarvis, a professor at the City University of New York’s Journalism School and blogger, this approach is the correct one in the age of Trump. “We saw in this election that the media tried to normalize Trump and abnormalize Hillary Clinton,” he told the Forward. “We should be watching his every statement, every move, every appointment.” On the ‘alt-right,’ he also offered harsh words, “I even think the term alt-right is a form of normalization. I call them fascists, even though that’s not totally accurate,” he added, observing that such a label could obscure the movement’s racist message. Ultimately, he said, “it’s not enough to be a stenographer, we need to provide context and hold these people accountable.”

Did CNN Make Alt-Right Normal With ‘Are Jews Human’ Banner — or Warn of Dangerous Reality?