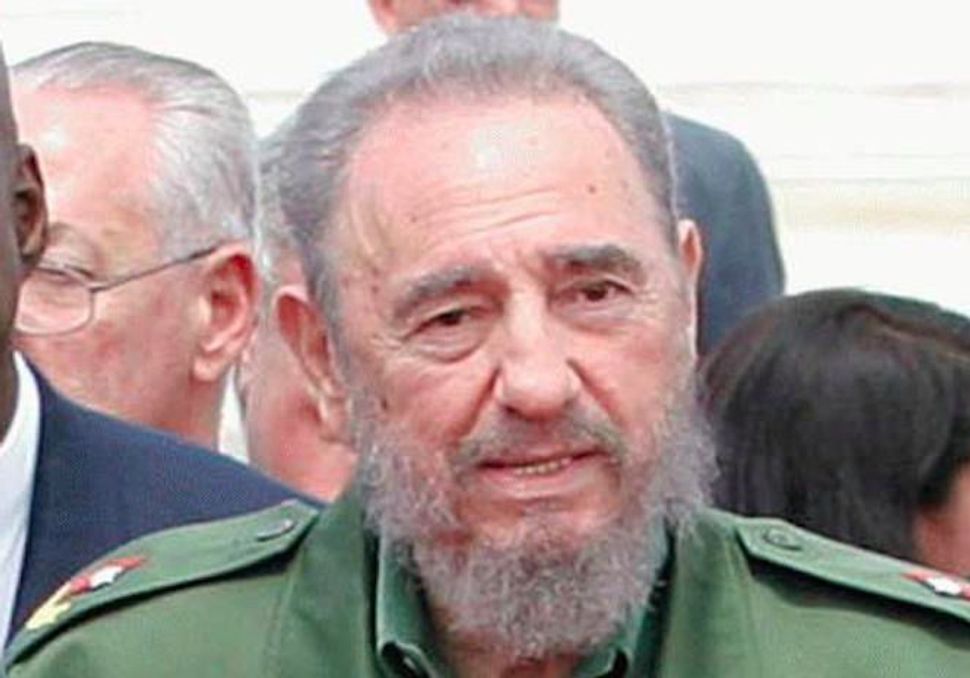 What did Fidel Castro stand for when it comes to Israel and the Jews? That’s a surprisingly difficult question to answer.

With the Cuban’s leader’s death November 25, at age 90, his long and controversial career is sure to be reviewed minutely on every issue in the days leading up to his funeral, December 4. But it would be hard to find a more convoluted record than the one he established with the Jewish state and world Jewry, and with the Cuban Jewish community.

It is a record that cannot be understood without reference to his different roles in Cuba and world politics. He was a revolutionary, the head of a communist state, part of the Soviet bloc and yet the fiercest Cuban nationalist. He was also a man of his time, the 20th century. This was the age of three world wars — two hot and one cold, the last being one in which Cuba was deeply involved. It was also the era of decolonization, socialism and the Holocaust. All three of these were important to Castro.

Castro began his political career at the University of Havana, where he affiliated with the Cuban People’s Party, better known as the “Ortodoxos” because of their Cuban nationalism and their anti-corruption stances in opposition to the government. The party’s leader, Eduardo Chibas, was a democratic socialist who served as president of the Committee for a Hebrew Palestine, a coalition of Cuban groups that, horrified by the Holocaust, supported the creation of a Jewish homeland in Israel. As a young leftist politician, Castro absorbed a consciousness of the Holocaust, common at that time on the left, as an event of incomparable suffering inflicted on the Jewish people.

The tragedy of the Jews under the Third Reich would become for Castro the epitome of exceptional human suffering. In his speeches, even when he attacked Israel with insulting and distorted references, there was no place for Holocaust deniers.

“There is nothing,” he said to the American journalist Jeffrey Goldberg, of The Atlantic, in 2010, “that compares to the Holocaust.” When Goldberg asked him if he would tell Iran’s president, Mahmoud Ahmadinejad — a Holocaust denier — the same thing, Castro answered, “I am saying this so you can communicate it.”

In fact, Castro went further; he recognized how Jewish history affected the security rationale of Israel’s leaders. “Now let’s imagine that I were [Prime Minister Benjamin] Netanyahu,” he told Goldberg. “I would remember that 6 million Jewish men and women, of all ages, were exterminated in the concentration camps.”

These comments prompted Netanyahu to respond that Castro’s remarks “demonstrate his deep understanding of the history of the Jewish people and the State of Israel.”

But this was all during Castro’s retirement years, at the end of a long, winding road. It began with his deep involvement in Chibas’s party but took many detours in the years that followed.

The Zionist movement was seen back then as the national liberation effort of the Jewish people fighting for a piece of their ancestral land to build a socialist state. In 1947, Cuba’s government, lobbied heavily by the Pan-Arab Committee of Cuba and the remains of the Cuban Nazi Party, was the only one in Latin America that voted against United Nations Resolution 181, which partitioned Mandatory Palestine under Britain into what was intended to be a Jewish and an Arab state. The Cuban left was on the side of the Zionists.

During these years, Castro and some of his closest followers forged important friendships with members of the Cuban branch of Hashomer Hatzair, a socialist-Zionist movement. Later, when they immigrated to Israel, some of these kibbutzniks of Hashomer Hatzair would become among the most fervent advocates for re-establishing diplomatic ties between Cuba and Israel after Castro broke with the Jewish state in 1973.

Castro’s positive attitude toward Jews and Israel had its best moment with the designation of his friend Richard Wolf, or Ricardo Subirana Lobo, as he was known in Spanish, as Cuba’s ambassador to Israel in 1960. Wolf, a German-Cuban Jew, had financially supported Castro’s struggle against the Batista dictatorship. For more than a decade, amid the increasing pressures of the Cold War, and as Cuba tied itself to the Soviet bloc, Wolf succeeded in nurturing his government’s ties with Israel. Economic, scientific and educational exchanges took place despite the virulence that put the two countries at odds in the U.N.

During this period, Cuba received significant benefits from cooperation with Israel in areas such as fish farming, citrus industries and modern agriculture. Wolf, whose wealth came from several metallurgical patents he owned, paid for the Cuban Embassy’s expenses out of his own pocket.

Despite all this, Castro’s domestic policies severely damaged the status of Jews in Cuban society. And his stance in the international arena came to be viciously hostile toward Israel.

Though Jews were not targeted as Jews, Castro’s implementation of communism, with its mass expropriations, destroyed Cuba’s middle and business classes, which included many Jews. Most of the Jewish community, which numbered some 10,000 to 16,500 before the revolution, fled the island as Castro’s Marxist-Leninist orientation became clear. Many left via a 1961 agreement between Israel and Cuba permitting Cuban Jews to go to Israel using chartered Cubana Airlines flights in return for shipments of goats and eggs. A good number of these Jews soon left Israel for other destinations. Many more left directly for Miami, the center of Cuban exile life.

By the spring of 1963, a census conducted by the congregation Adath Israel, in Havana, and by Cuba’s Zionist Union found that there were only 2,586 Jews left in the country, most of them living in Havana.

Those who stayed and wished to remain religiously affiliated faced profound social discrimination, thanks to Castro’s insistence on atheism as state policy — a stand that hurt all religious groups until Castro dropped it in 1992.

Internationally, Cuba was also a sponsor of the Zionism-equals-racism resolution passed by the General Assembly in 1975. Cuba’s diplomacy in the U.N. played a major role in that body’s repeated condemnations of Israel during the Cold War.

Despite this, Castro’s stance, even during the height of the Cold War, cannot be characterized as simply anti-Zionist. It was instead one riddled with contradictions. In 1974, he sent a tank brigade to support the Syrian regime of Hafez al-Assad against Israel in some disputed areas of the Golan Heights. He also began in the late ’60s a lifelong relationship with the Palestinians and their late leader Yasser Arafat. Yet, after the June 1967 Six Day War, when the entire Soviet bloc, except for Romania, broke off relations with Israel, Cuba refused to do so, turning back Soviet pressure.

“True revolutionaries never threaten to exterminate a whole country,” Castro told the French newspaper Le Monde in September 1967, explaining his stance then, even as the Arab world rallied around just this goal. “This kind of propaganda helped the Israeli leadership to mobilize the patriotism of their people.”

When Castro finally did break off relations, after the 1973 Yom Kippur War, it was not, according to many analysts, due to pressure from the Soviet Union. Rather, it was pressure from the Non-Aligned Movement, an influential coalition of Third World countries challenging Western hegemony, that caused the break. Castro craved to lead this group. And at its meeting that year in Algiers, soon after the war, the condition that Arab and African countries set for voting in Castro as chairman was Cuba breaking off with Israel.

After the fall of the Soviet Union in 1989 and the separate decline of the Non-Aligned Movement, things soon changed. In the early 1990s, Israel’s Jewish Agency, with Cuba’s cooperation, launched Operation Cigar, a program under which the agency assisted more than 400 Cuban Jews in immigrating to Israel. Yet in 1991, Cuba was one of just 25 states to vote in the U.N. General Assembly against revoking the Zionism-equals-racism resolution. During a 1998 meeting with leaders of the American Jewish Congress, Castro professed to be unaware of the vote. Other Cuban officials told the delegation that the country’s vote stemmed from Israel’s consistent record of voting in a small minority with the United States to uphold Washington’s comprehensive embargo against Cuba over many years.

Nevertheless, in 1998, after launching his policy of reconciliation with religious groups, Castro communicated to Cuban and world Jewish leaders his intent to support the revival of Jewish religious and social life domestically by visiting a Havana synagogue during the “revolutionary” festival of Hanukkah. Cuba’s Jewish population today is estimated at 1,500.

Shimon Peres, a man of Fidel Castro’s time and of no small contradictions himself, seemed to understand the complexity of Castro’s position. As one Cuban official related to me, in 1996, when both men attended the funeral of France’s former president François Mitterrand, each expressed surprise at the other’s thorough knowledge of his country. After Castro’s harsh criticism of Holocaust denial in Iran under Ahmadinejad, Peres, by then Israel’s president, also voiced his gratitude: “Your words presented a surprising bridge between a harsh reality and a new horizon. I thank you from the bottom of my heart. You proved that even those who are distant from each other can be close.”

Arturo Lopez-Levy, a native of Cuba, is a lecturer at the Political Science Department at the University of Texas Rio Grande Valley. Contact him at feedback@forward.com