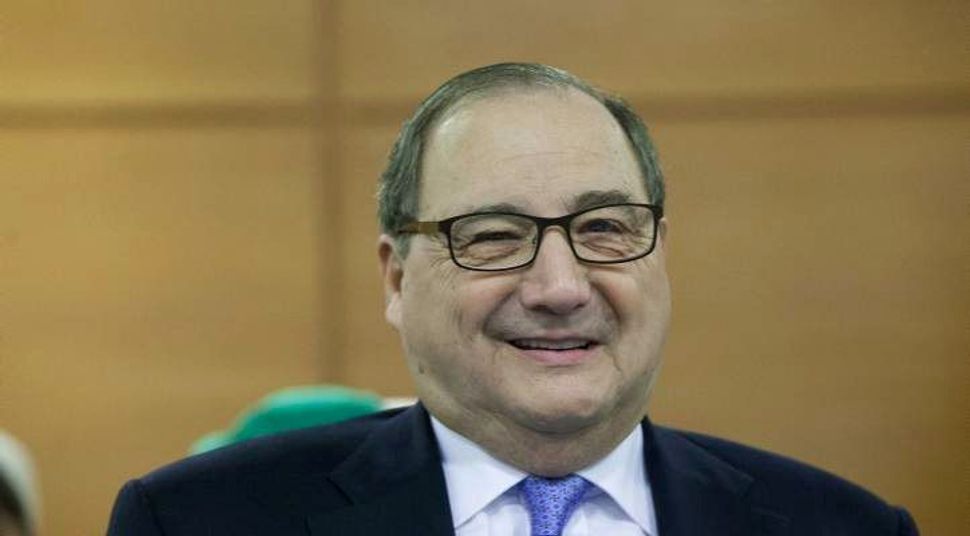 “The sun is still shining,” Abe Foxman boomed over the phone from Southern California, where it was “men’s week” at the Golden Door spa in San Marcos, about 35 miles north of San Diego.

It was an overcast afternoon in New York. But Foxman was paying one of his twice yearly visits last week to the exclusive spa, which has played host to the likes of Aldous Huxley, Johnny Weissmuller and a host of business moguls, oil barons, movie producers and real estate developers over the years. Known as the “Jewish Pope” thanks to his 28-year leadership of the Anti-Defamation League, Foxman, until his July 2015 retirement, used to damn or pardon people for anti-Semitism.

That’s no longer his job. So over the course of more than an hour, Foxman, 76, spoke from a position of distance that was not just a product of his temporary immersion in a world of massages, mountain hikes and organically grown gourmet meals. Retirement, Foxman stressed, had brought him new perspectives after decades of dealing from the inside with anti-Semitism, broader issues of bigotry and racism, and advocacy on behalf of Israel and the U.S.-Israel relationship.

“The view from here,” he said, quoting the hawkish Ariel Sharon after he became prime minister of Israel and surprised the world by withdrawing from Gaza, “is not the view from there.”

Outside the walls of Foxman’s retreat, much of the country was following the controversial post-election statements, activities and appointments of President-elect Donald Trump following an election campaign considered unprecedented in modern times for the bigotry, lies and threats Trump introduced into it.

Foxman made no effort to lighten the gravity of this. But the campaign, he said, was part and parcel of larger changes enveloping the world we are living in, thanks to digital technology, the internet and social media.

“The election didn’t create anti-Semitism and bigotry,” he said. “It just enabled what was always there. What we’re seeing now is that the sewer covers are off, and it’s coming out of the sewers. That’s part of the changing perceptions caused by the internet and social media.”

For all that, Foxman said, “I’m optimistic,” at least about Trump. Notwithstanding his campaign, “I think the president-elect has begun the process” of making clear he will govern on behalf of all the American people, Foxman said. He called recent comments in this vein that Trump has made in interviews with “60 Minutes” and The New York Times, and in a December 1 speech to supporters in Cincinnati “baby steps” in the right direction. But this would not be enough, he stressed.

“I believe there will come a time soon when he’ll have to make a presidential address from someplace like the Holocaust Museum or the Museum of African American History” to address concerns about who he is and what he stands for. “I’m not going to urge it or stamp my feet about it. But I think that’s where he needs to go.”

Does the former head of the ADL really believe that, having smashed longstanding campaign taboos against criticizing people for their race, ethnicity, religion, gender and disability in order to win the presidency, Trump can now give a speech that will allow him to, in effect, say, never mind, and inspire the modicum of national unity required to govern a huge, diverse country like America? And even if he could, what precedent would this set for what’s permissible in campaigns?

“The Democrats say he can never reform,” said Foxman. “I’m not impressed. I think he recognized what’s out there in America. I think democracy may be fragile in America, and people in a bubble, like you and me, we don’t see the fragility. I think we understand pain and anger, but in a very remote way.”

Trump, he said, “recognized the anger and anxiety out there, which we didn’t, and stimulated it for his purposes, to get elected…. He didn’t create it. I don’t think he believes it. If I felt he was a bigot, or that he created it, I’d be very concerned.”

This got to a larger conclusion — one far beyond Trump — that Foxman said he had drawn as a result of living outside the ADL for 16 months: “Anti-Semitism is much worse than we thought.”

“Inside, you measure, you analyze — we tried not to frighten people, to not make being Jewish too anxious,” he said. “But it looks much worse than I thought it was or projected it to be.”

The enabler of all this, he said, was modern digital technology.

“We don’t at this moment appreciate fully what social media is doing to us,” he said. “It’s destroyed privacy. And it’s on its way to destroying civility. That civility is very important for protecting Jews and other minorities.”

The traditional civil libertarian prescription for fighting bad speech, he noted, was countering it with good speech. “But what happens when bad speech comes in a tsunami?”

“Our safety, security and wellbeing has developed over time, uniquely in the United States,” explained Foxman. “It was an understanding that in our society, you can be a bigot — the Constitution guarantees your right to be a bigot, in your heart and in your home. But if you act out, you’ll pay consequences; not necessarily legal consequences, but you’ll pay a consequence.”

With those boundaries now smashed by social media, Foxman felt moved to pay measured tribute to the much-demonized phenomenon known as political correctness. It had, he said, however imperfectly, shored up those boundaries of civility until the internet came along.

“Donald Trump in this campaign tried to seize political correctness as, almost, a crime. I don’t think it’s a crime or a sin,” he said. “I don’t think it’s perfect. I don’t think it solves all of our problems. But it does help. I think it has played a role in building a facade of civility in our society, though I know people abuse it, too.”

Among Foxman’s other takeaways after 16 months out of ADL: The American Jewish community’s obsession with the movement to boycott, divest from and sanction Israel, known as BDS, is a seriously misplaced priority.

“When I was still on the inside, it was a bad, bad thing,” he said. “We saw BDS as this great, threatening movement to undermine Israel. We created international committees, built up huge funding, spent enormous resources.”

But from the outside it’s now clear to him: “BDS is not going to delegitimize or threaten Israel.”

“When I [recently] saw the prime minister,” Foxman related, referring to Israeli leader Benjamin Netanyahu, “he said, ‘I don’t have time to wipe my nose, with all the companies that want to come here, to be our friends.’”

“We either hyped it or gave it more of a victory or success than it deserved,” said Foxman.

The one area where he granted there was some cause for concern was the potential long-term political impact of BDS campaigns on campus.

“Most kids on campus couldn’t care less about BDS,” he said. “But it has subliminal impact. They absorb the idea that Israel is apartheid, or that it’s bad. So their impression of Israel is a negative, rather than a positive.”

As for the recent passion among lawmakers at the state and federal level to legally sanction BDS, Foxman pronounced himself “ambivalent.”

While working at ADL, he had told colleagues that legal sanctions against BDS should be “a last resort, not the first, because there are side effects,” Foxman recalled. Anti-BDS legal sanctions present themselves itself as “a conflict with freedom of speech,” he explained, and thereby turn people opposed to BDS on substance into antagonists because they see such laws as a threat to freedom of speech. “We need them to stand with us,” he said.

But now he said, he views such legislation as “a nice way to express political will, or public will. It sends a message that there’s a price to be paid.”

“I’m pragmatic enough to know it’s good politics for many political leaders to line up with Israel,” he said. “And legislation is how they do this.”

Foxman’s other post-retirement insight: It’s not Israel’s exclusively Jewish settlements on the occupied West Bank, its policies toward the Palestinians or the threat that it will come to be seen as an apartheid system that threatens Israel’s standing with American Jews; rather, it’s Israel’s attitude toward American Jews.

“What may distance the American diaspora from Israel is the nature of Israel’s democracy,” he said. By that, he clarified, he meant “its tolerance of Jews.”

“I see that as a lot more significant than I did from the inside, when it was the security issues, like Iran, arms and terrorism,” he said. “If American Jews differ [with Israel] on that, they’ll still stand with Israel. But if they feel Israeli democracy is less accepting of them, there will be distancing.”

Foxman cited issues such as Israel’s lack of tolerance for non-Orthodox forms of Judaism, to which the vast majority of American Jews adhere; its refusal to allow women to hold prayer services at the Western Wall holy site in Jerusalem, and its refusal to recognize non-Orthodox marriages and conversions.

“We fight for the right of Jews to pray in Uzbekistan,” he said. “So they should be able to pray where they want in Jerusalem. It’s this anomaly. And it’s these specifics that, in total, say to American Jews, ‘We don’t see you as equal partners in Judaism. Your version is not acceptable.’”

Netanyahu understands this danger, he said. But these issues remain “hostage to [Israel’s] political system.”

“It’s a lot more of a danger than disagreements [between Israel and American Jews] on settlements,” said Foxman. “Because if American Jews don’t feel they’re accepted in their way of worship, that will, God forbid, separate our two communities.”