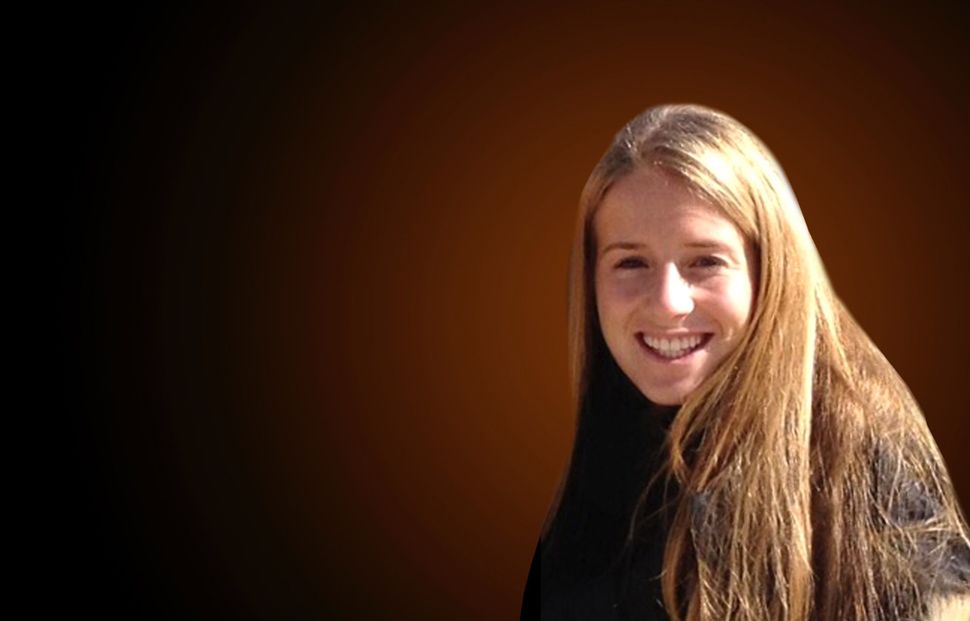 Image by Courtesy of Sheera Moffson

Moffson, 21, was one of three people killed in a bus crash in Honduras last January when the vehicle, which carried 25 Columbia and Barnard students on a volunteer mission, plunged down a ravine.

The bus was traveling to the airport to bring the students home after their weeklong trip providing medical care to poor neighborhoods. 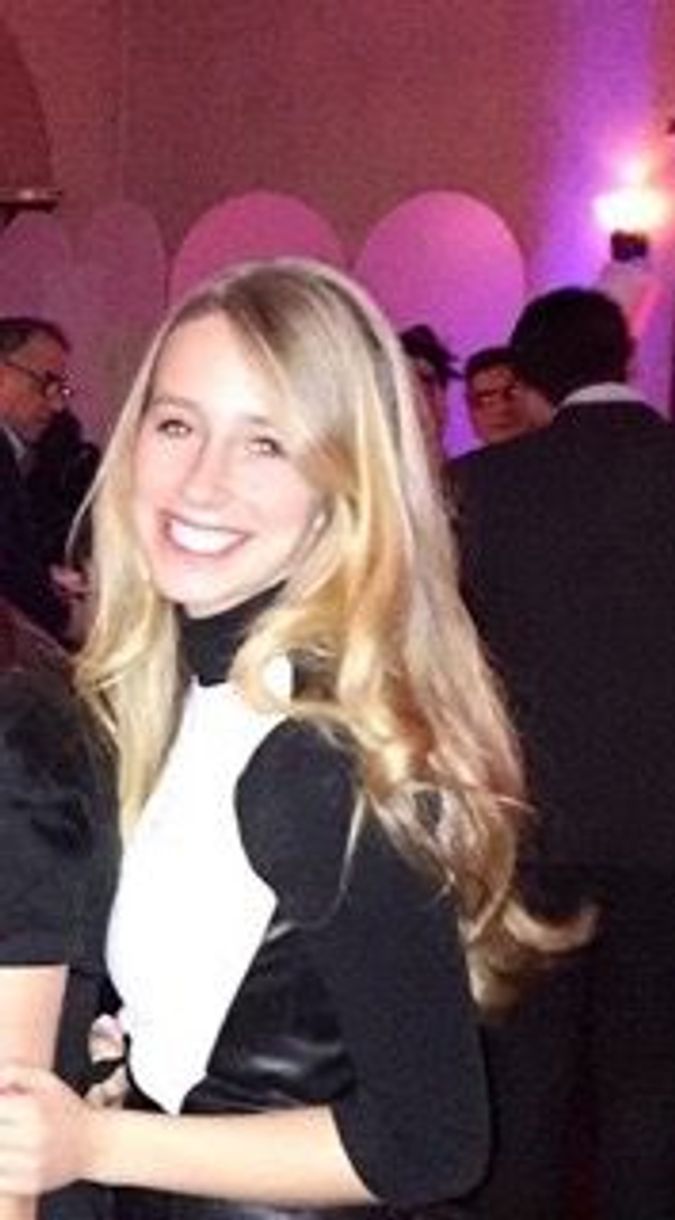 Daniella Moffson was studying to become a pediatric oncologist. Image by Courtesy of Sheera Moffson

Moffson started volunteering in her teens and spent big parts of her all-too-short life helping others. Her example has since inspired many others.

Daniella’s mother told the Forward her daughter “would be so surprised” by all that is being done in her name.

“So much goodness has emerged out of this tragedy, and so many  people have already benefitted from it. I know it would make her happy,” Sheera Moffson said.

“Daniella was an angel,” said Rebecca Cherson, 22. “She was the most selfless and kind hearted person. What she accomplished in 21 years, many people don’t do in a a life time.”

Cherson and Moffson bonded through volunteering for Chai Lifeline, an organization that helps children and families deal with the emotional, physical and financial stress of childhood illness.

Moffson, who wanted to become a pediatric oncologist, was a counselor at Camp Simcha, Chai Lifeline’s summer camp.

Now, Cherson and another mutual friend, Akiva Blumenthal, 22, are running as “Team Daniella” in the Miami Marathon on January 29, 2017 to raise money for Chai Lifeline.

“It’s the least we can do to honor her memory, to elevate her soul,” Blumenthal told the Forward. “And hopefully with these funds, we will continue to bring joy to a lot of children, just like she did.”

Cherson and Blumenthal hope to raise $100,000 by January.

“She was a huge inspiration to not just me, but to everybody around her,” Cherson told the Forward. “How many people have come together to do all these things is incredible.”

Moffson, who always had a smile on her lips, was raised Orthodox Jewish and prayed three times a day – using a pink siddur.

“When I think of her, lot of times I think of her holding that siddur,” said Ariella Speivack, Moffson’s best friend and Barnard roommate. “It was something very special to her.” 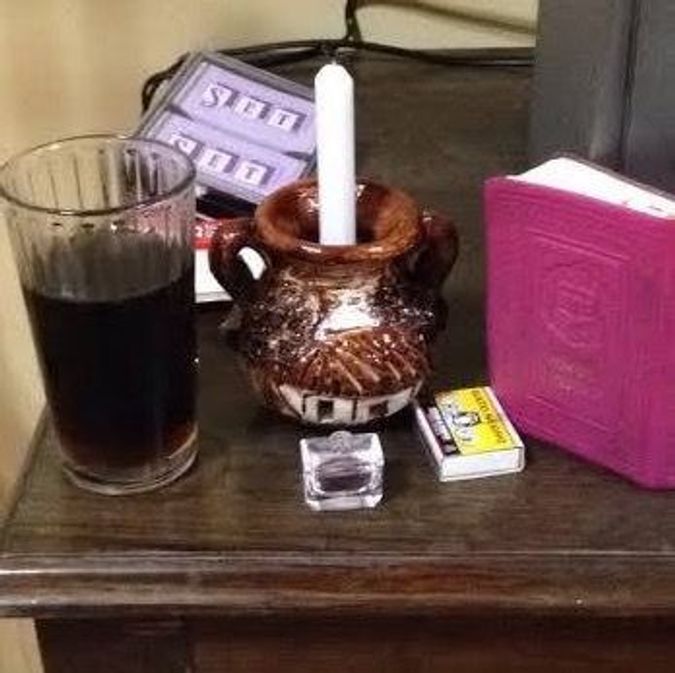 Moffson created this table arrangement to celebrate Havdalah in Honduras, shortly before she was killed. It includes her pink siddur. Image by Courtesy of Ariella Speivack

One of the very last texts Moffson sent to Speivack was a picture of a table arrangement she created to celebrate shabbat while she was in Honduras, her siddur placed prominently in it.

“I can feel Daniella’s happiness as she snapped this picture. She sent it with no description,” Speivack said. “It was as though she was just sending a ‘selfie.’”

To remember and honor her friend, Speivack and her sister, Elana, created a pink siddur (and a blue version for boys) dedicated to Moffson.

On the first page, Speivack included a siddur quote that perfectly embodies Moffson for her: “She is cloaked with strength and majestic beauty, she lived every moment with passion, energy and joy.” 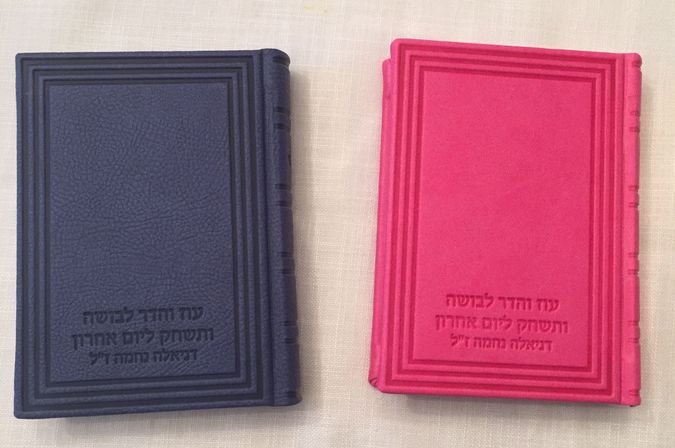 The blue and pink siddurs were created by Ariella Speivack, Moffson’s longterm friend and college roommate.

“She was always very happy and full of life and this is basically the meaning of this book,” Speivack told the Forward. “My hope is that praying from this siddur daily will give us another way to keep Daniella close to our hearts and thereby continue to inspire us every day.

Speivack sold over 1,300 copies of the siddur; many to people who didn’t even know Moffson and who weren’t that religious to begin with, but got inspired to pray more after hearing Moffson’s story.

“It truly reflects how loved Daniella was and the impact she had on the Jewish community,” Speivack said.

All the money raised from the siddur sales goes to Chai Lifeline.

Moffson attended school at Ramaz on the Upper East Side, a Modern Orthodox prep school.

To cope with the tragedy within their own community, Ramaz students created a special “Pirkei Avot” publication in Moffson’s name, that includes a commentary on the “Ethics of the Fathers.”

In the commentary, they focused on ways that the lessons of the mishnayot can be applied in everyone’s daily lives.

“If there has ever been a ‘hasid’ [a kind and caring person] in our world it was Daniella Nechama Moffson,” wrote Rabbi Haskel Lookstein, Ramaz’s principal, in the introduction of the book. “There was almost nothing she loved more than to do something for another person.”

Proceeds from the sale of the book go to the Daniella Moffson Memorial Scholarship Fund, which will assist Ramaz female students studying a year in a seminary in Israel. 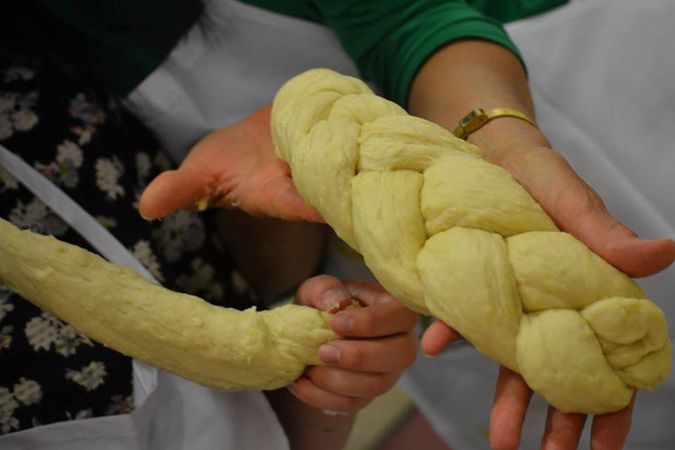 Moffson was a great baker and had a famous challah recipe that got passed around after her death.

Soon after, her friends started organizing challah bakes as a mitzvah in her memory.

Then, Shira Druion, who did not know Moffson personally, helped them take it a step further by turning the challah baking in Daniella’s memory into a movement.

Druion came up with the name “Dough4Daniella” and a corresponding Facebook page. “Almost immediately, it went viral and women all over the world were organizing challah baking in her memory,” Druion told the Forward.

The first bake happened at Kira Moshal’s house, who knew Moffson in passing, and was lead by Joanne Dove who organizes the London Shabbos Project challah bakes. “It was the most special evening and we had an emotional kumzitz to wrap it up,” Moshal told the Forward.

There have been well over a hundred baking sessions all over the world, in countries as far away as Australia or South Africa.

In June, one was organized in Israel, where Moffson had spent a gap year after high school. 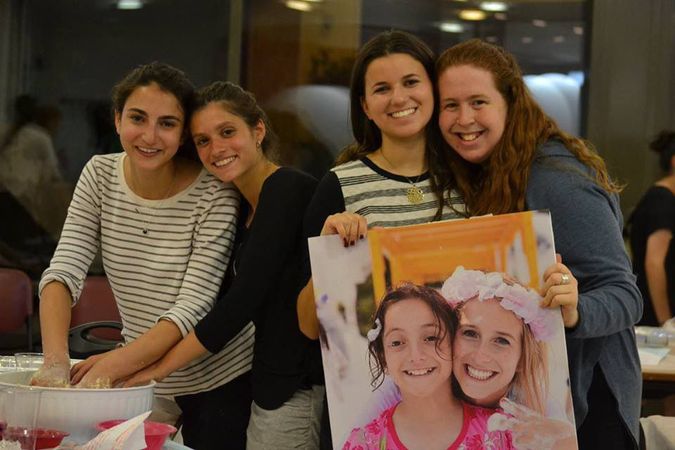 A Challah baking event in Israel in memory of Daniella Moffson. Image by Facebook/Chaiyanu Israel

Over 250 young women met to celebrate the end of their own gap year by doing good in Moffson’s name.

Proceeds from tickets to the event – about $ 1,000 – were donated to Chaiyenu, the Israeli version of Chai Lifeline.

“It was a lively and happy event, but we definitly stopped for meaningful moments of speech about Daniella,” said Avigayil Adouth, a student at Stern College, YU’s women campus in Brooklyn, and one of the four woman who organized the event during her time in Israel.

“It’s always nice when you get teenagers together to do something for the greater good,” Adouth said.

The same sentiment stands behind the creation of the Daniella Moffson Foundation by her parents, sister and brother.

“The idea is to identify projects and programs, that emulate her acts of Chesed – good deeds – and to empower young adults to pursue a life of communal activities,” explained Sheera Moffson, Daniella’s mother.

Most of the foundation’s work is done by a “junior board,” consisting of Moffson’s friends, her siblings and their friends. All young people in their early twenties.

“We believe this approach will serve as a powerful catalyst in the lives of these young people to embrace a life of community work alongside their professional and familial achievements,” reads the foundation’s mission statement. “That outcome would be a great legacy arising out of this tragedy.” 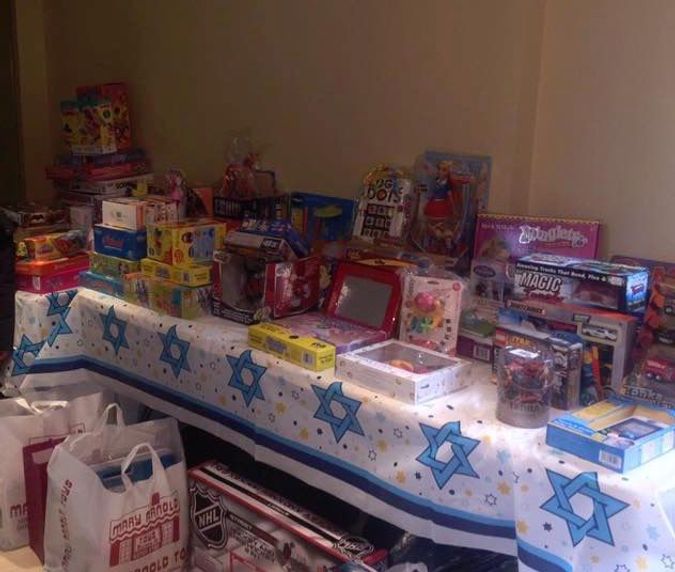 Leading up to Hannukkah, the foundation organized a toy drive for OHEL Children’s Home and Family Services, a Jewish foster care organization.

They collected hundreds of toys for OHEL children, and also spent a Sunday writing holidays cards to Chai Lifeline children.

Besides these more hands-on activities, the foundation is raising money to help finance a new cottage at Camp Simcha.

A cottage in Daniella’s name

With all the money donated in her name, Chai Lifeline is building at cottage for sick children at Camp Simcha, the summer camp Moffson used to volunteer for.

The cottage will have place for 40 people, including “twenty very sick children,” explained Rabbi Simcha Scholar, the executive vice president of Chai Life.

In order for these children to attend the camp, bunks must be built to a ‘hospital grade’ standard, which is why it is expensive to build them.

The cottage will be finished this summer and “will be a great tribute to Daniella” and her infectious smile, Rabbi Scholar said.

“I think it’s a beautiful way to honor a beautiful person, he told the Forward. “She dedicated her life to brining her smile to children’s faces, and her smile will go to work in this beautiful cottage.”

There are many more examples of coming together and doing good in Moffson’s name.

Her basketball team raised $3,500 for the Friendschip Circle, a program that pairs volunteers with people with special needs.

Students at Columbia created the “Daniella Moffson Minyan Project” to ensure someone is praying in her name three times a day for a year. Over 1,280 different people signed up to “daven” in her memory.

Almost every month a shiur, a talmudic study session with up to 300 people, is being hosted in her name. A music room in an orphanage in Israel was dedicated in Moffson’s name. A Torah has been commissioned, which will be completed at her grave site – all without her family’s involvement. 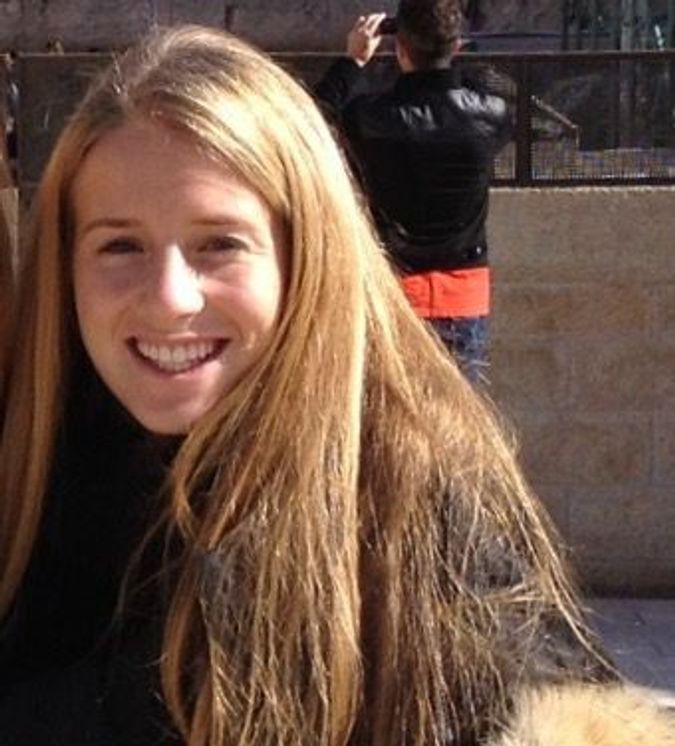 Image by Courtesy of Sheera Moffson

“I mostly would say it has affected the kids, who recognized the many things she did for others and want to take on the challenge of replicating what she did,” said Sheera Moffson.

“Kids always reach out to me, and tell me they visited hospitals and  started volunteering at chartible organizations.  ‘If Daniella can do it, we can do it,’ they say.”

“Until you get older one does not realize how important it is to help others, and now many young adults in their 20’s are realizing the importanatce. It’s very special and it’s a tremendous tribute to our daughter,” Sheera Moffson told the Forward.

Find out more about the “Daniella Moffson Foundation” here.

You can donate to “Team Daniella” running in the Miami Marathon here.

You can order a pink or blue siddur by sending an email to esspievack@gmail.com

Find out more about all the “Dough4Daniella” baking events here.