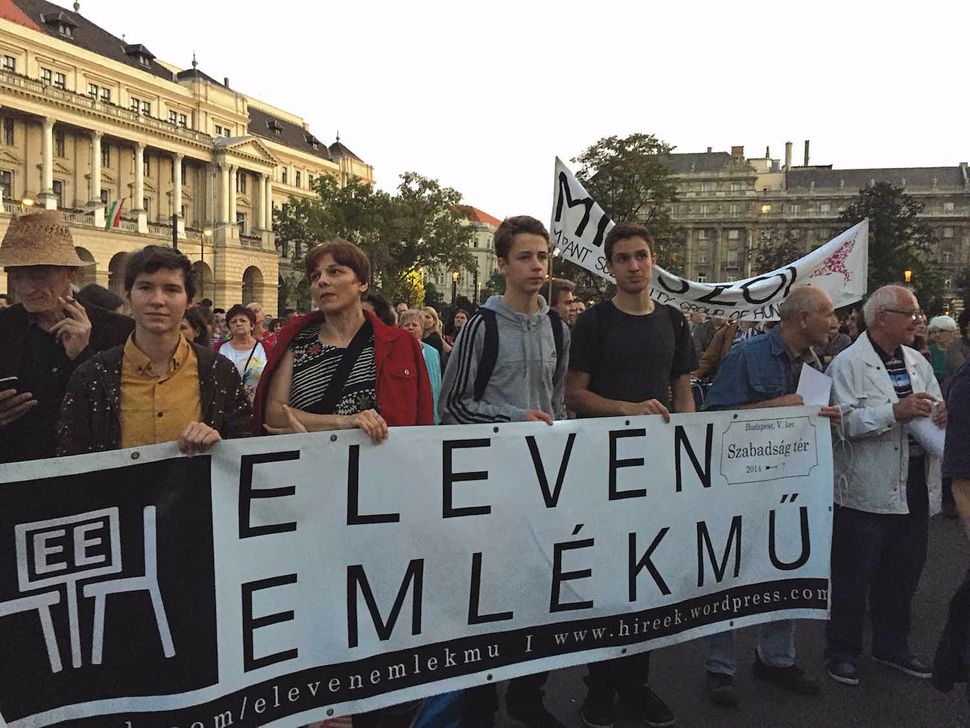 As the first results of the U.S. presidential election were released on November 8, the Union of French Jewish Students, which goes by the acronym UEJF, posted a worried note on its website.

Populism is also “threatening French democracy,” UEJF’s president, Sacha Ghozlan, was quoted as warning. “Being vigilant is not sufficient anymore.” French Jews, he said, must confront “the distrust and anger of voters in order to save what is left of our democracy.

The French students are not alone in their concern. For many European Jews, Trump’s victory is a signal that Europe’s struggle with ethno-nationalist populism is spreading to America, the land most of them viewed as the world’s redoubt against this tide.

“The rest of the world looks toward America for guidance and expects that a mature democracy such as the U.S. safeguards against the election of people like Trump,” said Jonathan Ornstein, executive director of the Jewish Community Center in Krakow, Poland.

Over the past years, far-right groups have gained ground across Europe. The strengthening of Marine Le Pen’s National Front in France, Geert Wilders’ Party of Freedom in the Netherlands, and the Freedom Party in Austria have all raised the fears of local Jewish communities.

“The feeling that people are not heard by the political elite, that their vote doesn’t mean anything, that is a general complaint,” said Ron van der Wieken, chairman of the Central Jewish Organization, the umbrella body of Jewish organizations in the Netherlands.

“In my own experience, most Jews in the Netherlands are horrified by the election of Mr. Trump,” said Manja Ressler, a Dutch Jewish journalist. Referring to Wilders, she said, “The ones who aren’t are supporters of the Dutch Donald Trump… and his racist, xenophobic party. He has been playing on the fear of some Dutch Jews of our Muslim population.”

Similar worries about parallels between the rise of the far-right and populist forces in Europe and the evolution of American politics were echoed further east. In Hungary, it’s the success of the authoritarian, ethno-centric Fidesz party and its penchant to rewrite Hungary’s history of collaboration with the Nazis during World War II that is raising Jewish concerns. In Poland, Jewish groups have protested the populist, ultra-conservative Law and Justice party for much the same reason.

“Of our 630 Jewish members at the JCC, about 75 are Holocaust survivors,” Ornstein said. “Many have asked me how such a thing is possible in America, a country that for them symbolizes tolerance and respect for all, no matter who they are. Some of our oldest members have spoken to me about the parallels between what Trump has said and what they heard in Europe in the 1930s.”

Observers have noted some similarities between Trump’s anti-establishment rhetoric and the efforts of some European parties to discredit their countries’ elites. “Political correctness became a dirty expression in Hungary, and in America in certain circles it also became a dirty expression,” said Rabbi Ferenc Raj, a Holocaust survivor who is the founding rabbi of Congregation Bet Orim, in Budapest, and also serves as rabbi emeritus of Congregation Beth El, in Berkeley, California. “People almost everywhere are disappointed,” he added, noting that leaders like Trump “emphasize the differences that divide us.”

There are also parallels in terms of policy: While Trump has promised to build a wall between the United States and Mexico, for example, Hungary’s prime minister, Viktor Orbán, has built a controversial fence along Hungary’s southern border to prevent refugees from crossing into the country.

Trump also intends to defund Planned Parenthood in an effort to limit access to abortions, echoing Poland’s recent efforts to limit abortion rights. The move has sparked large-scale protests across the country.

Jewish communities in Europe have taken a particularly active role in opposing the rise of far-right movements and xenophobic attitudes.

In Austria, where far-right presidential candidate Norbert Hofer was tied in the polls with his Green party-backed rival, Alexander Van der Bellen, the president of the Jewish Communities of Austria took a public electoral stand for the first time. On November 29, Oskar Deutsch, the Jewish leader, called on Austrians of all political streams to vote for Hofer’s opponent.

“Van der Bellen is not the lesser of two evils, he is the better candidate and has been a friend of the Jewish community and Israel for many decades,” he wrote in a Facebook note to the Austrian public.

The Green Party candidate also used a video of an 89-year old Austrian Jewish Holocaust survivor. Identifying herself only as Gertrude, she compares Hofer’s rise with the rise of Nazism in her youth. The video went viral and has 3.5 million views.

In France, Jewish organizations have long advocated against the far-right National Front party, whose founder, Jean-Marie Le Pen, was convicted multiple times for inciting racial hatred, including Holocaust denial. His daughter, Marine Le Pen, who took the party’s reins in 2011, has disavowed her father’s views on the Holocaust and sought to allay Jewish concerns while inveighing against what she calls “Islamization” of French society. But most Jews remain leery of her party’s hyper-nationalism and aggressive secularism.

Ahead of the country’s December 2015 regional elections, the French Jewish umbrella organization CRIF asked Jewish voters to help block the National Front’s advance. The country’s chief rabbi, Haim Korsia, called publicly for a “civic uprising” of voters to “breathe life into democracy… in these particularly troubled times for the nation.”

French Jewish students have been particularly active in advocating against the National Front. The UEJF participates regularly in protests against the far right, while the organization’s leaders comment in the mainstream French media and work together with French civil rights groups.

Despite the breadth of European Jewish communal response to the far right’s resurgence, some Jews believe that worries about Trump’s populism and its parallels with Europe’s own struggles are premature.

“I am in waiting mode,” said Agnes Heller, a Jewish Hungarian philosopher. “We don’t know what he is going to do and what his politics will be like.”

According to Heller, “there are no parallels” between the United States and Hungary at this moment. “In the U.S., there is a constitution which no president can change.” But in Hungary, where the Fidesz party commands a strong majority in parliament, “they can change the constitution as much as they like.”

Some Jewish leaders, meanwhile — aware that their communities are politically diverse — are taking a cautious stance on Trump. They cite members of their communities who believe the president-elect will implement policies more favorable to Israel.

When it comes to Trump’s victory, “some people were delighted; a lot of other people were not delighted at all, but very frightened,” van der Wieken said. “It depends on your own look at Dutch politics; that is a decisive factor for how you look at Trump.”. “In Hungary, one part of the Jewish community thought the outcome was great, as Trump really supported Israel during the campaign,” said András Heisler, president of MAZSIHISZ, the umbrella organization of Hungarian Jewish groups. “The other half thought it would have been better if Trump had not won.”

Like many American Jewish leaders, European communal officials are hoping that Trump’s campaign rhetoric and his appeal to so-called “alt-right” groups, which embrace white nationalism and racism, will change once he is sworn in.

“Though some of his claims during the campaign were quite worrisome – concerning women and members of religious and ethnic minorities—we need to give Trump a chance,” Heisler argued. In his view, we need to “trust that he will show a good face as president.”