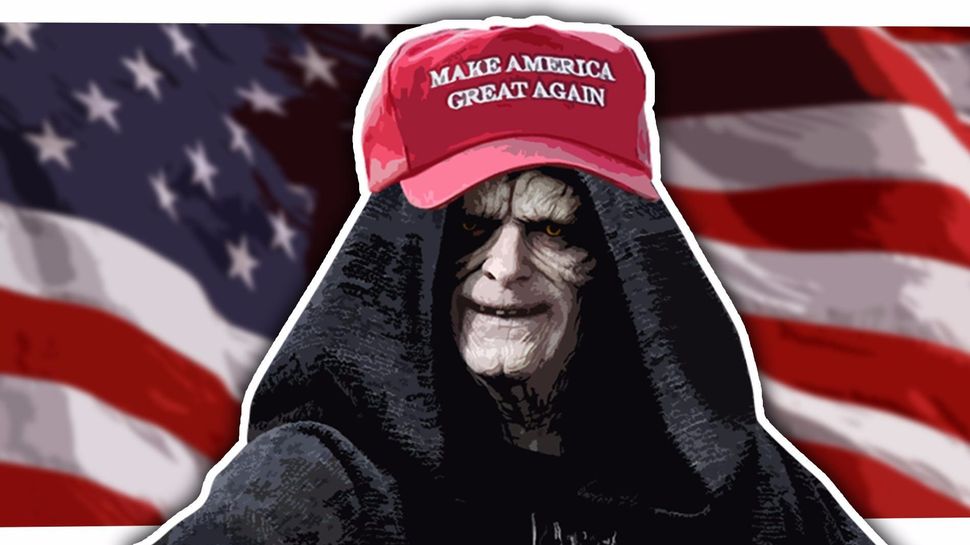 Internet communities have been likening Trump to the “Star Wars” Emperor for months. Some members of the “alt-right” embrace the comparison. Image by YouTube

Members of the white nationalist “alt-right” are hoping to capitalize on the soon-to-be released “Star Wars” film, re-casting their hero Donald Trump as the franchise’s Senator Palpatine, a politician who rises to power by harnessing dark mystical powers and seeks to conquer the galaxy.

“We are the brave. We will win because you and your whole movement are tired, annoying and utterly out of touch with reality,” one alt-right Reddit commenter wrote, addressing opponents of the movement. “Hail Palpatine.”

“Rogue One: A Star Wars Story” is slated to be released this month and is a spin-off of the original series, released in the 1970s and 1980s. Conspiracists online see a nefarious subtext to the new movie: to foist diversity on whites. Jews control the movies, the thinking goes, and the recent “Star Wars” films star women and ethnic minorities facing off against villains who are white men. The subtext, “alt-right” thinkers argue, is that the movies are teaching viewers that whiteness is bad.

Now, some are advocating for inverting the film’s notions of good and evil and normalizing their brand of white nationalism. 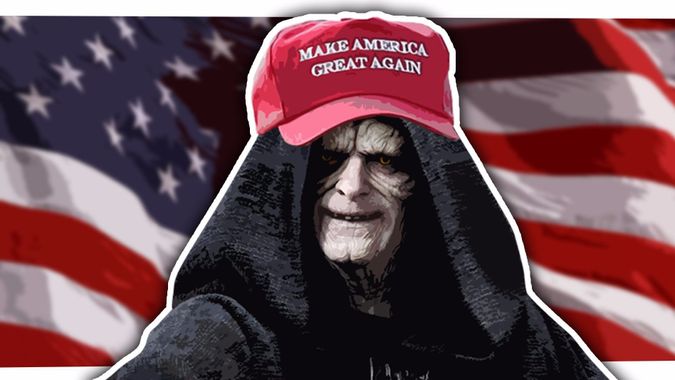 Internet communities have been likening Trump to the “Star Wars” Emperor for months. Some members of the “alt-right” embrace the comparison. Image by YouTube

“If Disney is going to directly push a connection between white supremacy and the Empire (they are), I say we use that to our advantage,” the same commenter, using the screen name “WEHRMACHT_BITCHES_AT” wrote on an “alt-right” Reddit thread. “Keep telling all white men they are evil and keep casting all the bad guys as white men and see what happens.”

“Memes are still useful for weakening the Overton window,” one user with the name “Reactionary_Vizier” wrote. The “Overton window” refers to the range of ideas the public will accept in political discourse.

The “Star Wars” series takes place in a galaxy “far, far away” and pits the Jedi, protagonist warriors, against the evil Sith, who seek to take over the galaxy. In the first three chapters of the series, a senator in the ruling Republic named Palpatine rises to power, sides with the Sith and seeks to destroy all of the Jedi.

“We could make faux recruitment posters for being a stormtrooper,” “WEHRMACHT_BITCHES_AT” wrote, referring to the foot soldiers of the evil Empire. “Star Wars is so deeply penetrated into the popular psyche, we’d be crazy not to exploit it… The Alt-Right needs to appropriate all the imagery of the Empire.”

The “alt-right” was born and thrives online. The movement has already proved adept at using popular culture icons, like the cartoon character Pepe the Frog, to their advantage. Some of the “alt-right” discussed whether they should mount a campaign to equate Trump to Darth Vader, who is a student of the Emperor in the films, instead of the Emperor. But the Emperor’s story arc and political background appear to fit more neatly.

For example, in a YouTube video posted in November, supporters superimposed Trump’s face on the Emperor’s body in a clip of one of the earlier films. In the clip, the Emperor duels with Mace Windu, a black character, rendered in the YouTube video as President Obama.

There is, however, a rival camp within the “alt-right” that pushes for boycotting the movie. The “alt-right” movement also organized a boycott of an earlier “Star Wars” chapter, released last year, because one of the main characters was black.

“I won’t be paying to see ‘Rogue One’ — or give a dime to (((Disney))) ever again,” one commenter wrote, using triple parenthesis, or the “echo,” to signal to others a perceived Jewish influence.

Another user wrote: “I refuse to pay those Jews another dime.”