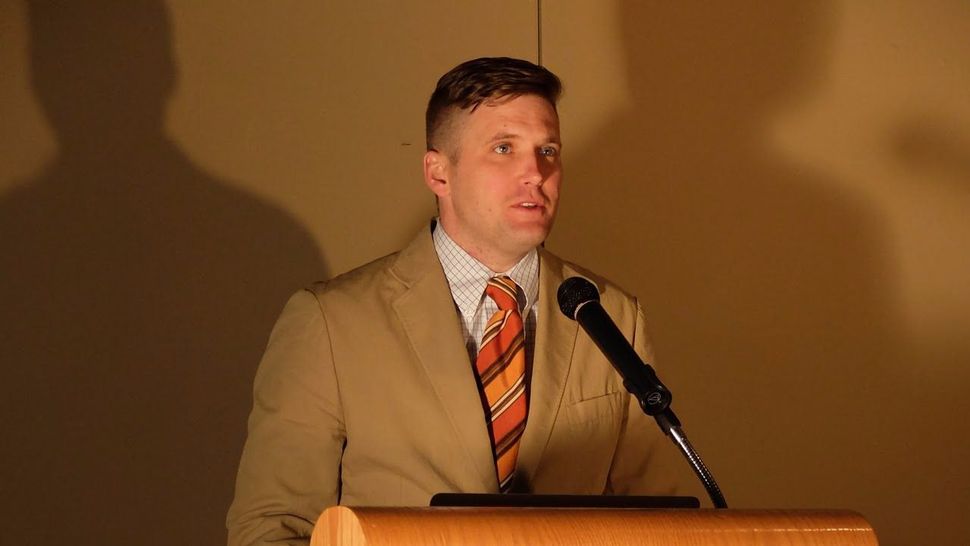 Amid a campaign by neo-Nazis to harass Jewish residents of a small Montana town, white nationalist and “alt-right” figurehead Richard Spencer is rallying to his mother’s side after she said she was under pressure to sell a building she owns there.

“They are trying to punish me by punishing my mother,” Spencer said in an installment of a regular video diary he posts online. “I am very proud of mother for not just backing down.”

Spencer also says his mother, Sherry Spencer, and her building in downtown Whitefish, Montana have “nothing to do with politics.”

Sherry Spencer built and rents a building downtown but may now sell the building, citing pressure on her to do so from Tanya Gersh, a local realtor with ties to the town’s human rights group, Love Lives Here.

While the group’s representatives say it never intended to target individuals, Gersh told a local television station that Sherry should address the situation by “selling the building, making a donation to human rights efforts, and making a statement in opposition to white supremacist ideas spread by Richard.”

Sherry Spencer also posted emails from Gersh in which Gersh pressed her to sell the property to preempt planned protests against her, and offered to broker the building’s sale for a commission “and donate much of my commission to local Human Rights Networks.”

The uploaded emails do not include Spencer’s own replies to Gersh.

Rachel Carroll Rivas, co-director of the Montana Human Rights Network, which is affiliated with Love Lives Here, said she knew about the exchanges between Gersh and Spencer and disputes Spencer’s characterization of the exchange as hostile.

Rivas called the exchange a “conversation between two mothers.” “Sherry has chosen to hide that side that by framing herself as a victim,” Rivas said.

Gersh did not reply to written requests from the Forward for comment.

Amidst the controversy, Sherry and her husband Rand also wrote in a Daily Inter Lake op-ed that they do not support their son’s politics: “We are not racists. We have never been racists. We do not endorse the idea of white nationalism.”

On Friday, Andrew Anglin, founder of the neo-Nazi website The Daily Stormer called on his readers to “take action” against a number of local Jews, posting contact information and pictures emblazoned with a yellow Star of David and the German word for Jew.

“There are only 6,000 Jews in the entire state of Montana, yet they’re 100% of the people trying to trying to silence Richard Spencer by harassing his mother,” the website reads.

The site offers an official disclaimer that it opposes violence and warns its followers, “Don’t ever do anything illegal, ever,” but in its headline commands: “TAKE ACTION!” and adds further down, “It is well within your rights to tell these people what you think of their actions, trying to extort Richard Spencer’s family.”

In his video diary, Spencer says that trolling local Jews is not something he’d do. “At the end of the day,” he said in the video, “it’s mean words, it’s pixels.” Trolling online is “not on the level,” he said “of trying to force a sale, to take away the property of an innocent woman,” referring to his mother.

Rabbi Francine Roston, a prominent Jewish community who has been targeted said she was “overwhelmed with protecting my family,” but declined to say more.

Police are ramping up patrols in Whitefish and working with the FBI.

The Anti-Defamation League is also working with families and law enforcement. “ADL has been in almost daily contact with the families and law enforcement authorities to address the ongoing anti-Semitic harassment being perpetrated by white nationalists against the Jewish community,” said Jonathan Greenblatt, CEO of the ADL. “The security of the families involved is our paramount concern.”