Jason Greenblatt Is Headed for Trump’s White House. His Brother Is in Prison.

Jason Dov Greenblatt and his brother Joseph grew up in an Orthodox Jewish family in Queens, the sons of a diamond cutter. Both went to Yeshiva University, and then on to law school.

There, their paths diverged.

Today, Jason Greenblatt is poised to become President-elect Donald Trump’s point man on talks between the Israelis and Palestinians, among other international negotiations, and one of the most influential Jews in the incoming Trump administration.

His brother Joseph Greenblatt is in state prison in New York, where he wound up after running a series of investment fraud schemes that targeted Jewish investors.

“Jacob and Esau,” said Heshy Friedman, a lay leader at a Brooklyn synagogue that Joseph Greenblatt defrauded in the 1990s, comparing the Greenblatts to the biblical brothers, one blessed and one cursed. “That’s the way life is.”

In both schemes, Joseph Greenblatt used his Jewish heritage to win the trust of investors.

“Right from the beginning, Joseph used his Jewish connections apparently to find victims, people he could fleece,” said Kevin DeMarrais, a former columnist and reporter at The Bergen Record, who covered Joseph Greenblatt’s crimes for nearly a decade.

Jason Greenblatt had no connection to the criminal activity of his brother or his father. He told the Forward that he was among the victims of his brother’s fraud, and that he has not spoken to Joseph Greenblatt in over decade.

The Trump transition team announced December 23 that Jason Greenblatt will leave his current job as executive vice president and chief legal officer of The Trump Organization to serve as the president’s special representative for international negotiations. He is expected to manage the administration’s work on Israeli-Palestinian talks and on trade agreements, among other negotiations, according to CNN.

“Very talented people,” he said of Jason Greenblatt and the other executive, who did not appear.

Later in the meeting, Trump turned to Jason Greenblatt for help on a question asked by a Forward reporter about the West Bank.

Jason Greenblatt attended law school at New York University, and then went to work as an associate at a Manhattan law firm. He has nurtured an entrepreneurial streak, writing a popular directory of Manhattan kosher restaurants and launching a failed coffee pod machine rental business. With his wife and children — they have six — he wrote a guidebook to Israel for families. 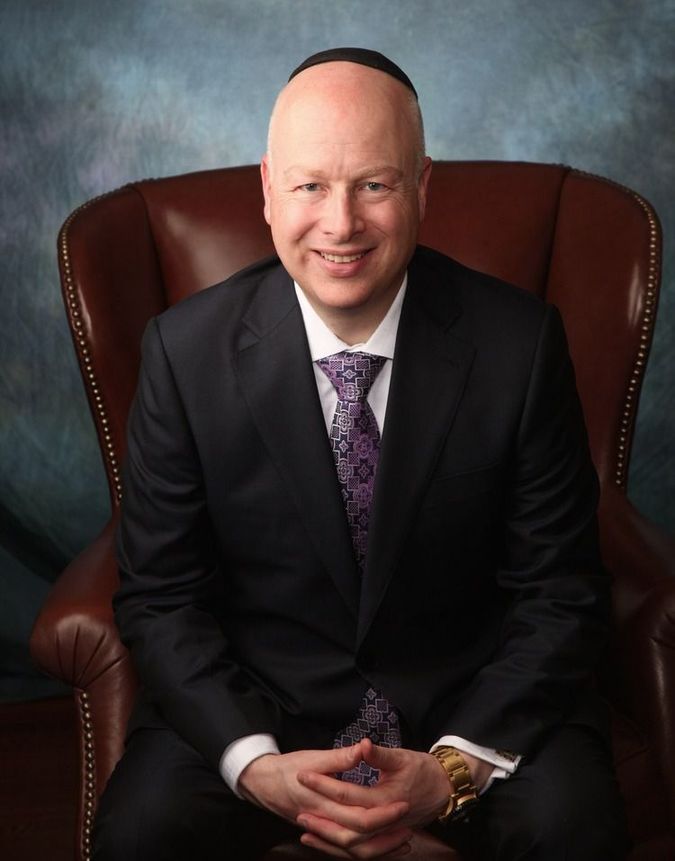 Jason Greenblatt joined The Trump Organization in 1997. Since the spring, he has been a vocal Trump surrogate, particularly in the Jewish press. He was profiled by no less than five Jewish outlets between April and May.

Meantime, his brother Joseph Greenblatt has been incarcerated since 2006.

Joseph Greenblatt is currently serving time at the Washington Correctional Facility, a state prison in upstate New York, where he is concurrently serving sentences on convictions in New York and New Jersey courts.

He left a string of victims going back decades. “We’re struggling along here now,” said Stephen Coffey, who has recovered some of what he says he lost to Joseph Greenblatt through the bankruptcy courts, but claims that he is still short $300,000.

Coffey said that Joseph Greenblatt would don a yarmulke and tzitzit, the prayer fringes worn by observant Jews, when he visited other investors in the Sarasota, Florida area where Coffey lives.

“He did play the Jewish card,” Coffey said.

After Yeshiva College, where he edited the yearbook, Joseph Greenblatt went on to Yeshiva University’s Benjamin N. Cardozo School of Law. In 1987, the year he graduated, Joseph Greenblatt founded a mortgage brokerage in Boro Park, a Jewish neighborhood in Brooklyn. The firm, called Executive Funding Corporation, took money from investors and offered mortgages to prospective homeowners who did not qualify for traditional bank loans.

In 1994, Executive Funding’s checks started bouncing. A year later, prosecutors in Brooklyn indicted Joseph and Max Greenblatt on charges that they used money from new investors to pay off old investors. They pleaded guilty to grand larceny in 1997. Max Greenblatt was not sentenced to jail time in the case. Joseph Greenblatt’s high-powered lawyer, Benjamin Brafman, kept Joseph out of prison under a commitment to pay financial restitutions to his victims.

After the 1995 indictment, Joseph Greenblatt opened a new mortgage brokerage, Maywood Capital Corporation, which owned property in Harlem and offered high-interest loans to homeowners. Max Greenblatt had a seat on the board. Maywood, like Executive Funding, ran ads in the newspaper, trying to hook small investors with high rates of return.

“This is a very different type of business” from Executive Funding, Joseph Greenblatt told the Bergen Record in May 2004.

That, it turned out, was not the case.

In March of 2004, Joseph Grenblatt pleaded guilty in federal court to cheating U.S. Department of Housing and Urban Development out of $2.9 million. In August of 2004, he was indicted in Bergen County, New Jersey for passing $2.1 million in bad checks. And in January of 2005, the New Jersey Attorney General and the state’s Bureau of Securities filed a civil suit accusing Joseph, Max Greenblatt and others associated with Maywood of a “massive securities fraud scheme.” The suit charged that Joseph Greenblatt had taken $8.8 million in investors’ funds to pay for personal expenses, including charges at the Ritz Carlton and Neiman Marcus.

From there, things only got worse.

The federal judge overseeing the HUD fraud case remanded Joseph Greenblatt to federal custody in 2006 as he awaited sentencing. He was eventually sentenced in April 2009 to 46 months in prison. Credited with time served, he went from federal custody to New York State custody in May 2009, where he began serving a nine year sentence for the 1997 Brooklyn felony conviction for the Executive Funding fraud, after the judge there determined he had failed to meet the terms of his plea deal.

In the meantime, the Manhattan District Attorney indicted Joseph Greenblatt for his operation of Maywood, which, according to prosecutors, had been using funds from new investors to pay back old investors, just like Executive Funding.

That same year, a New Jersey judge hearing the case brought by the state’s Attorney General found that Max and Joseph Greenblatt had “employed a scheme and course of business that operated to defraud investors” while running Maywood, and ordered them to pay over $34 million in restitution.

“[Joseph] Greenblatt certainly turned our…’dream years’ into a life of mediocrity and endless depression,” one victim wrote in a letter to the court in the Manhattan criminal case, according to a 2012 report in the Bergen Record.

Jason Greenblatt Is Headed for Trump’s White House. His Brother Is in Prison.