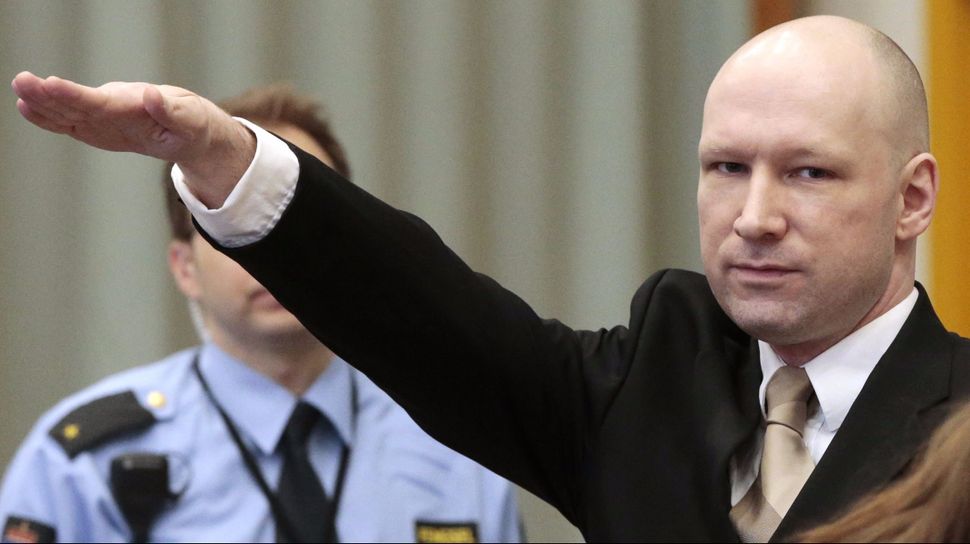 Mass murderer Anders Behring Breivik gave a Nazi salute on Tuesday to a court where Norway appealed against a ruling that it has violated his human rights by keeping him in virtual isolation since he massacred 77 people in 2011.

Breivik, in a black suit and striped tie and a beard he has grown in the past year, made the defiant gesture as he entered the high-security courtroom at the start of the Jan. 10-18 hearing about his detention conditions.

Judge Oeystein Hermansen told him the salute was insulting and should not be repeated.

Breivik, 37, made a similar salute at the start of the lower court hearing last year where the judge agreed with him that his near-isolation violated a European Convention on Human Rights ban on “inhuman and degrading treatment”.

Launching the state’s appeal, Attorney General Fredrik Sejersted defended the draconian measures, including no contact with other inmates, use of strip searches and handcuffs, as fully justified for an unrepentant far-right extremist.

“There is no violation of his human rights,” he said.

“He has not broken down, he has not expressed remorse, he is proud of what he has done,” he told the court, saying Breivik was ever more convinced of his extreme right-wing ideology.

Sejersted told Reuters that Breivik’s letters and other writings showed that he had embraced a more purely Nazi-style ideology in the past two years, shifting from a more home-grown fanaticism.

Breivik had “better conditions” than other prisoners in Norway – a three-room cell including a training room as well as a playstation, television and newspapers – to compensate for security and a lack of contact with other inmates, he said.

On July 22, 2011, Breivik killed eight people with a car bomb outside the prime minister’s office in Oslo and then gunned down 69 others on an island near the capital, many of them teenagers attending a youth camp of Norway’s then-ruling Labour Party.

Breivik, flanked by his two lawyers with three prison guards behind him, shook his head repeatedly as Sejersted spoke.

Last year, lower court judge Helen Andenaes Sekulic ruled that Breivik was wrongly kept in a “locked world” for 22-23 hours a day. Breivik’s only contacts are lawyers and professionals such as guards and health workers.

His mother was the only family member who wanted to visit him, hugging him shortly before she died of cancer in 2013.

“The main problem is isolation from other people,” Breivik’s lawyer Oeystein Storrvik told Reuters. Still, he said that he meets Breivik in a room separated by bars, slightly easier than a system until late 2016 of talking through a thick glass wall.

The appeal is being heard in a converted gym at Skien jail where Breivik is serving Norway’s longest sentence – 21 years with the possibility of an extension.

Hermansen said that the three-judge appeal court would give its ruling sometime in February.

At his last court appearance, Breivik grumbled about microwaved food and cold coffee. Sejersted said Breivik had later said that the complaints were intended to create headlines to gain attention for his right-wing ideas.