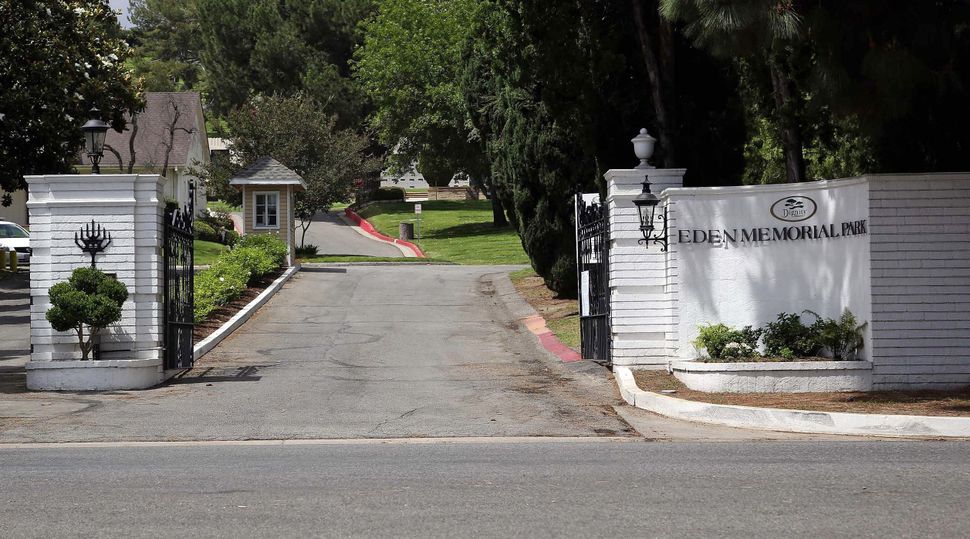 Not long ago, Jean Bergman, an 88-year-old retired manicurist, received a check for $1,000. She deposited it without giving it too much thought.

“I wasn’t told any of the details,” she said.

The check arrived in connection with her husband’s grave at Eden Memorial Park, a Jewish cemetery in Los Angeles. The cemetery has been sued twice after allegations that gravediggers were instructed to throw human bones interred there into a dump pile to squeeze in more graves and thereby maximize profits.

“They were basically putting in plots too close to one another. As they would dig a grave, it would break the outer burial container, and the bones would spill out,” said Gary Praglin, the attorney who represented Bergman and about 150 other plaintiffs in the lawsuit, which was settled in 2015. “They didn’t tell anybody until groundskeepers wanted to go public.” The groundskeepers, Praglin said, “did describe it as a bone pile, a big pile, horrible.”

The total amount of the settlement is confidential and could not be disclosed, Praglin said.

Service Corporation International, the for-profit corporation that owns Eden Park Memorial, is the largest cemetery company in the United States. Its officials would not comment on this lawsuit – or on a previous lawsuit involving the same cemetery and identical allegations, which the company settled for $80 million in 2014. The second lawsuit covered those whose loved ones were buried in the cemetery before 1985, when SCI purchased the cemetery, and after 2009, when the first lawsuit was filed. This time period was not included in the original lawsuit. Those who joined the second lawsuit, therefore, were claiming that SCI continued to disturb established graves and to dispose of bones even after the first suit was filed.

The State of California’s Cemetery and Funeral Bureau inspected Eden Memorial Park and found no evidence of wrongdoing, according to the spokeswoman for the state’s Department of Consumer Affairs, Veronica Harms.

SCI also admitted no wrongdoing. Yet the company settled the suit instead of going to trial. And many in the Jewish community are concerned, because SCI has also been sued in connection with similar charges at other Jewish cemeteries in other parts of the country. The company has acquired more Jewish cemeteries in recent years.

“The tradition is that the Jewish community should own our burial sites, not non-Jews,” said David Zinner, executive director of Kavod v’Nichum, a Maryland-based not-for-profit organization that manages the website Jewish-funerals.org. When a corporation owns a cemetery, once all the plots in that cemetery are sold off, the company will no longer take care of the burial ground, Zinner said.

“The Jewish community will have to take care of it. It will be our responsibility regardless,” he said. “Why should we have SCI making money while it’s profitable, and then the burden is back on the Jewish community?”

At the end of 2014, SCI acquired Stewart Enterprises Inc., which was then the second-largest provider of cemetery and funeral services in the country, making SCI a mega-company in the industry. In the process, SCI also came to own many Jewish cemeteries – often leaving the original names of the burial grounds unchanged, according to the Reform and Reconstructionist rabbi Joe Blair, from Harrisonburg, Virginia.

Because of this, many people are unaware that the Jewish community no longer owns their local cemetery, the rabbi said.

Blair said he estimates that more than 60% of Jewish cemeteries in the United States are now owned by SCI.

Zinner compared SCI to a predator that is now getting ready to swallow more prey.

“They took a big bite, and now they’re digesting,” he said.

SCI declined repeated requests by the Forward for comment.

Eden Memorial Park in California is not the only case in which SCI has ‘Why should SCI make money while it’s profitable, and then the burden is back on the community?’been sued in connection with Jewish cemeteries.

In May, a Florida court ruled in favor of the company after a Jewish woman sued it because non-Jews, including a Christian pastor, were buried next to her husband in the SCI-owned Menorah Gardens & Funeral Chapels cemetery in Southwest Ranches, Florida. The widow, Orna Mammon, argued that because she bought a grave in a Jewish cemetery, she had a reasonable expectation that non-Jewish people would not be buried just feet away from her husband. But she lost the case. When reached by telephone this week, Mammon would not speak to a reporter, for fear that the company might sue her for lawyers’ fees, she said.

During the trial, Mammon was questioned about where in the Hebrew Bible it says specifically that non-Jewish people cannot be buried next to Jews. The court ruled in favor of SCI because resolving the case “would require courts to determine what constitutes Jewish custom,” according to a Washington Post story.

In an older lawsuit against SCI in Florida, the company was sued after bones were discovered in a dump pile. SCI originally claimed that these were animal bones, according to a 2002 Associated Press story. But DNA tests confirmed that the bones belonged to some of the people who should have been buried in the cemetery. The cemetery manager, Peter Hartmann, committed suicide when the story broke. The lawsuit, which covered two Menorah Gardens cemeteries, in Fort Lauderdale and West Palm Beach, respectively, was settled in 2003 for $100 million.

At one point, local rabbis held meetings to discuss taking over the Menorah Gardens cemetery in West Palm Beach, said Rabbi Leonard Zucker, chairman of the Cemetery and Funeral Practices Committee of the Palm Beach County Board of Rabbis. But that never came to be, because “we couldn’t afford it,” Zucker said.

Still, Zucker, who is a Conservative rabbi, is not convinced that any wrongdoing took place. He said the mix-up may have been the fault of the company that owned the cemetery prior to SCI purchasing it.

“I had a number of people in my congregation who said, ‘I’m going to sue SCI.’ ‘What for?’ ‘Because everybody is suing them.’ That’s the sort of thing that was happening,” Zucker said. “SCI has deep pockets – so people have the tendency to sue the people with the deepest pockets. That’s why SCI gets sued so much.”

This statement doesn’t sit well with Sheldon Cohen, an Ohio dentist whose father’s bones were found in a dump pile at SCI’s Menorah Gardens cemetery in West Palm Beach. DNA tests confirmed that the bones belonged to his father, Hymen Cohen, an air force veteran who passed away in 1983.

“It was awful. A pretty horrifying thing,” Sheldon Cohen said. Cohen was compensated in the lawsuit, but he said the money does not come close to rectifying what happened.

“It was just too painful to keep proceeding with it,” he said.

Ellen Kleinert, whose husband is buried in SCI’s Fort Lauderdale cemetery, is also dissatisfied. Kleinert was not compensated, and this was because she refused to allow SCI’s staff to disinter her husband’s grave to conduct a DNA test. Disturbing the dead is against Judaism, she explained.

“The way we see it is, we lost my husband, the father of my children, twice. We don’t know where his body is,” she said.

She is working on a documentary film to expose what happened in the cemetery. But back in California, Bergman, whose prepaid grave is waiting for her under a tree next to her husband in Eden Memorial Park, doesn’t know about the DNA tests in Florida. As far as she is concerned, her husband, an architect who died at the age of 83 from Alzheimer’s disease, is still resting in peace on the same spot where he was laid to rest.

Though she joined the lawsuit and accepted the settlement payout, she told the Forward: “Truthfully, I’m not convinced the cemetery did something wrong. Personally I just don’t see it.”