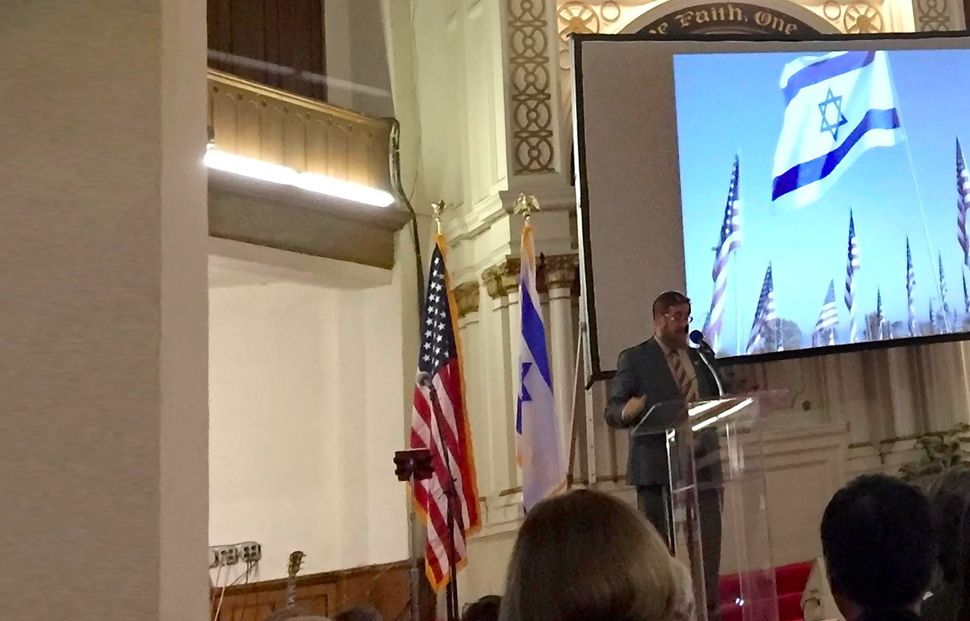 Yehuda Glick, an American-born member of the Israeli parliament and a rabbi, says Trump’s election is a miracle. Image by Sarah Posner

The day before Donald Trump’s inauguration, a range of conservative Christian luminaries gathered in a downtown Washington, D.C. church. They included a California pastor who fought against same-sex marriage; an anti-abortion priest, a Christian Zionist and a member of Congress. They all praised Trump as a modern-day savior of the Jews, even — and especially — the rabbi in attendance.

Yehuda Glick, the American-born Israeli lawmaker and agitator for Jewish prayer on the Temple Mount, delivered a speech at the event, in which he declared Donald Trump “King of the United States of America,” and called his upcoming swearing-in a “miracle.”

The event, called “A Special Inauguration Prayer Event and Celebration of the USA-Israel Relationship, was organized by the California pastor, Jim Garlow, at Greater New Hope Baptist Church. The historic building was the location of Washington Hebrew Congregation, a prominent Reform synagogue, until 1954.

“We are living in an era of miracles,” Glick said, referring to the establishment of the state of Israel, its victory in the Six-Day War, Christian support of Israel, his survival of a 2014 assassination attempt — and the inauguration of Donald Trump.

Glick had traveled to Washington with fellow Likud MK Sharren Haskel as guests of Tommy Waller, the founder of HaYovel, a Christian group. HaYovel claims to be fulfilling biblical prophecy by assisting settlers in harvesting their wine in the West Bank, which Waller refers to as Judea and Samaria.

Glick’s speech followed a series of speeches and prayers by Christian right leaders. Father Frank Pavone, a Catholic priest and anti-abortion activist, prayed that under Trump, the Supreme Court of the United States would become “the Supreme Court of Jesus Christ.” There were prayers for the United States’ relationship with China, Taiwan and Russia. Jonathan Cahn, a Messianic Jewish rabbi and author of apocalyptic novels, donned a tallit and prayed the priestly blessing in Hebrew and for peace “b’shem Yeshua Ha Moschiach,” in the name of Jesus the Messiah, “the king above all kings.” People in the audience blew shofars throughout the event.

An Orthodox rabbi, Glick stood on the altar and read, in English, from Psalm 72, a prayer for King Solomon, and “a prayer for all kings, and especially the king of the United States of America.”

Glick echoed a notion that had circulated in evangelical and Pentecostal circles during the campaign, comparing Trump to the Persian King Cyrus, referred to in Isaiah as God’s “anointed one.”

Cyrus liberated Jews from the Babylonian exile, helping them move back to Jerusalem and rebuild the destroyed temple. If Trump moves the U.S. embassy from Tel Aviv to Jerusalem, Glick said, “He will be the latter-day Cyrus!”

The embassy issue proved to be a potent rallying cry. After a singing of the Star Spangled Banner and Hatikva, to which many in the audience sang along with the Hebrew lyrics, Rosemary Schindler Garlow, Jim Garlow’s wife, called Jerusalem the “place where the Messiah is coming soon.”

“I pray for spiritual embassy aliyah,” Schindler Garlow went on, referring to moving the U.S. embassy to Jerusalem.

Speakers portrayed the possible relocation of the embassy in 2017 — fifty years after the Six-Day War — as biblically significant. Waller noted that “this is the 50th year of the liberation of Jerusalem,” he said, calling it the Jubilee year.

Mike Evans, a Christian Zionist and founder of the Friends of Zion Heritage Center in Jerusalem, reiterated the Jubilee theme. “Our bodies are in Washington, D.C.,” he said, “but our souls are in Jerusalem, D.C. — David’s Capital.”

Efforts to curtail settlement growth were portrayed as existential threats to Israel. Haskel, raising alarms that Jews could be “disconnected” from their land, suggested, even, that they could be expelled from Israel. She praised efforts to relocate the embassy to Jerusalem and criticized what she described as giving Palestinians hope that “someday the Jews will leave this city.” Trump, she predicted, “will be proof” for the Palestinians “that those hopes will be gone.”

Waller described “East Jerusalem, Judea and Samaria” as the “target” of the recent U.N. Security Council Resolution condemning settlements, and called for Christians to be “biblically engaged” in a “fight” over the land. Christians, he said, cannot be “indifferent,” citing Elie Wiesel, the late Nobel laureate and Holocaust survivor.

Rep. Trent Franks (R-AZ), co-chair of the Congressional Israel Allies Caucus and a co-sponsor of one of several bills to move the embassy and declare Jerusalem Israel’s capital, spoke about evangelical support for Israel. People often skeptical, he said, of their motives, accusing them of “just want[ing] to evangelize Israel.”

“It’s worse than that,” said Franks, to laughter. “We want to evangelize the whole world.”