Jews Spoke at Trump’s Inauguration. The ‘Alt-Right’ Is Not Happy. 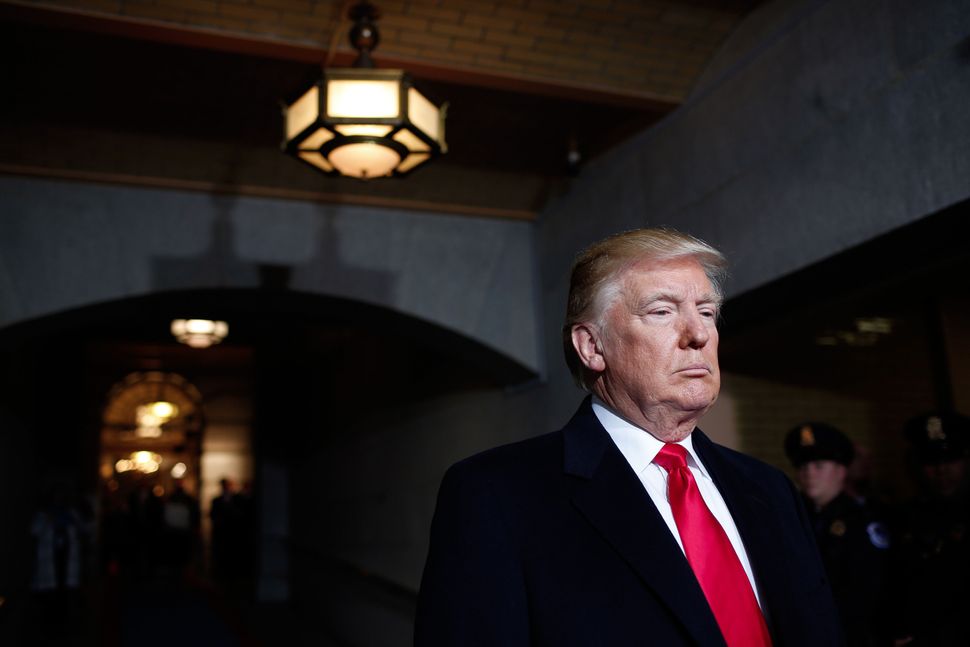 For the white nationalist “alt-right” that reveled in Donald Trump’s win, the two Jews who took the podium during his swearing-in were the agents of a foreign and anti-white agenda.

“Chuck Schumer is speaking,” tweeted Richard Spencer, head of the white nationalist National Policy Institute. “It’s generous of Trump to allow a representative of a foreign nation to address Americans.” 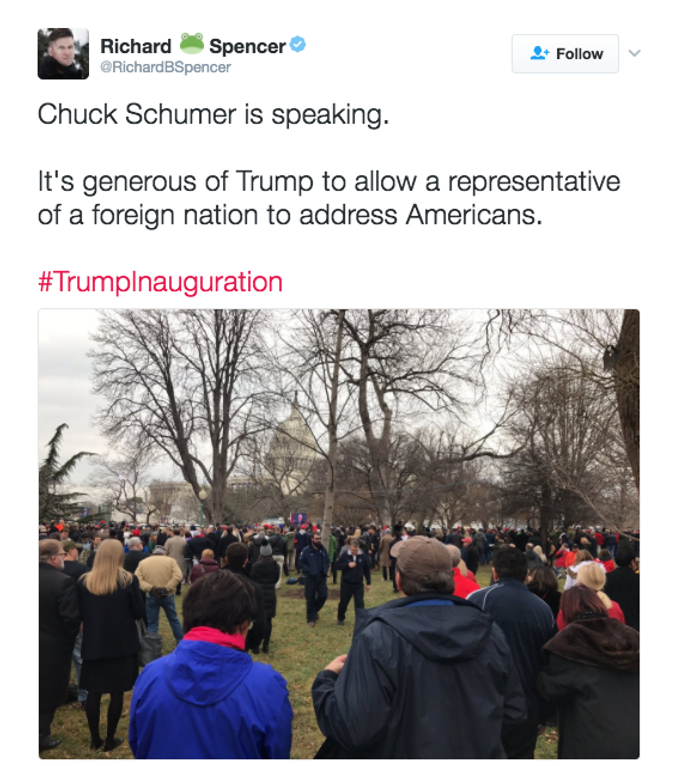 Spencer was punched in the face Friday by an activist after others accused him of being a neo-Nazi.

American rabbis and Jewish politicians have long spoken at presidential inaugurations. This year, Los Angeles Rabbi Marvin Hier blessed Trump’s term in office, and Senate minority leader Chuck Schumer of New York delivered the only address from the opposition, moments before the swearing-in.

“Chuck Schumer is a dual citizen of America and Israel,” one alt-right Reddit commenter wrote. “How is this allowed in politics? Where does his allegiance lie?”

Schumer does not hold Israeli citizenship.

Other white supremacists were more alarmed by the benediction delivered by Rabbi Marvin Hier, the founder and dean of the Los Angeles-based Simon Wiesenthal Center.

One “alt-right” Reddit threat was titled: “Why does a Jew get to give his benediction before the Christian!”

“I was so happy after the don’s speech and the next thing I know some Jew master is up on stage in a yarmulke spouting satanic nonsense,” wrote the user TUMBL3W33DM4N.

The Twitter user @RightVanguard began by writing that he believed Trump was “making it clear that Marxist destruction of the nation state is not going to be tolerated.”

Some “alt-right” figures perceive Marxism, particularly Cultural Marxism, as part of a broad Jewish plot against the white nation.

But @RightVanguard was alarmed when he Hier take the stage moments later.

“Who let the Jew on the stage?” he asked.

Reddit user TheSilverBanger wrote that he found it humorous that the rabbi had to follow Trump’s speech which he called “a sixteen minute long dog whistle” for white nationalists. “Then the token Rabbi peddles up to the microphone to implore God to bless Donald Trump.”

Still others rallied their spirits. At the beginning of the day, the Reddit channel r/altright/ appeared to have 14,088 subscribers — a number with hidden significance for white supremacists. Fourteen Words, or simply 14, is a reference the slogan: “We must secure the existence of our people and a future for white children.” Eighty-eight represents the phrase “Heil Hitler,” because H is the eighth letter in the alphabet.

Later in the thread, Kobathesealion wrote: “Happy Trump Day, everyone.”

Jews Spoke at Trump’s Inauguration. The ‘Alt-Right’ Is Not Happy.