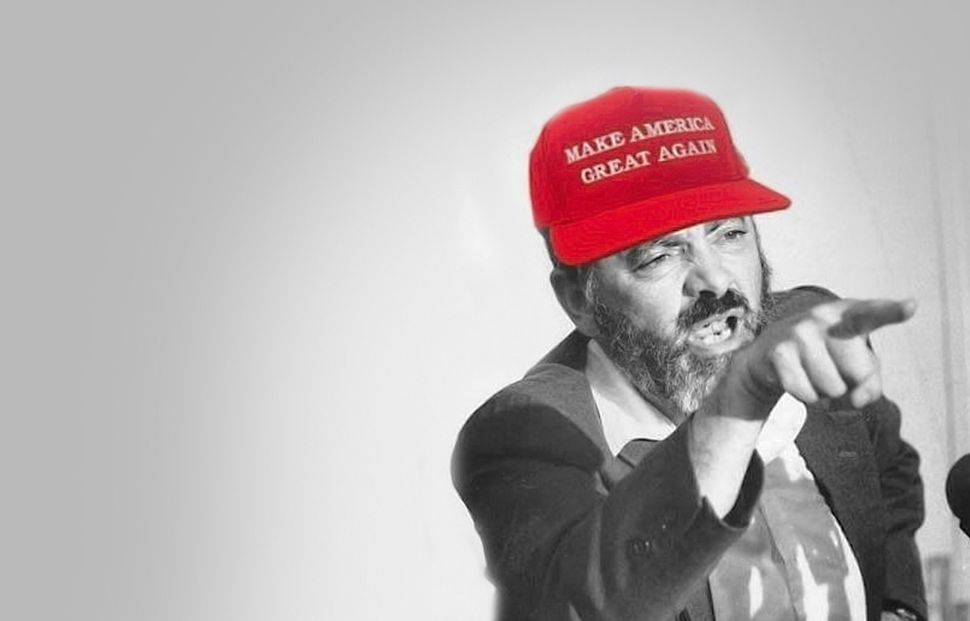 Earlier this month, about 20 Jews gathered in a rental space above New York City’s Times Square to celebrate the presidential inauguration of Donald Trump. Israeli wine, red and white, was poured into plastic cups alongside platters of bagels.

The event’s organizers wore black T-shirts bearing the phrase “Never Again,” the slogan of the Jewish Defense League, a far-right organization angling for a resurgence amid a rise in ethnic pride, and ethnic tension, spurred by Trump’s campaign.

As the new president’s image flashed on the mounted TV monitor, the room erupted in cheers.

“We support him,” Karen Lichtbraun said. “Trump is supporting many of the ideals that we have.” Lichtbraun is a senior organizer in today’s JDL, and wants to propagate its founding principle of fighting anti-Semitism “by any means necessary.” 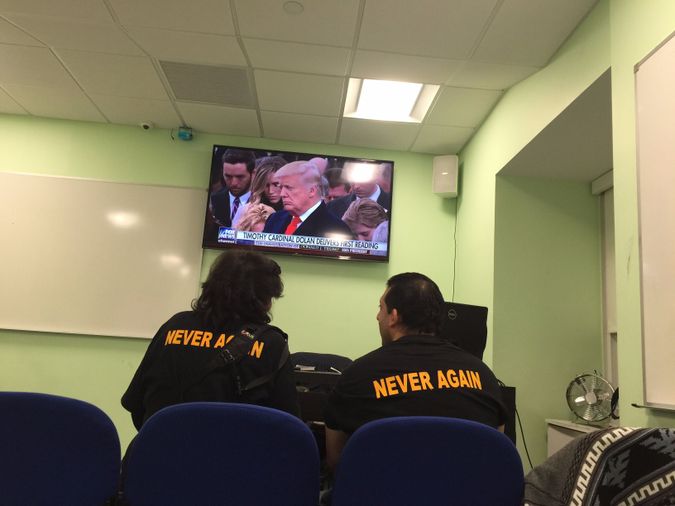 Founded in 1968 by the firebrand Jewish nationalist Meir Kahane, the JDL is seeking to re-establish itself in the United States after decades of inactivity.

But generational divisions might thwart the group’s ambitions. Members disagree sharply on how they should relate to the so-called “alt-right,” the loosely organized white nationalist movement that championed Trump during the election.

While an older generation, affiliated with the original JDL, denounces the “alt-right” as simple Nazis — younger activists who identify as Kahanists feel differently.

“A lot of our ideology is similar,” Jonathan Stern, a younger Kahanist activist, told the Forward, speaking at Trump’s inauguration event. “I see this as a priority — to reach out to the people in the ‘alt-right’ that are pro-Jewish, pro-Zionist and pro-Israel.”

‘He speaks in the same language as Kahane’

The inauguration celebration in Times Square was an effort of a nascent New York branch of the JDL that, if formally established, would be helmed by Lichtbraun.

There’s one thing all the activists — older and younger — agree on: Trump is seen as a harbinger of positive change.

Kahane was an American-Israeli Orthodox rabbi who formed the JDL to “protect Jews from anti-Semitism by whatever means necessary.”

A handful of JDL members and leaders — including Kahane — were convicted in relation to acts of domestic terrorism in the United States. Kahane relocated to Israel, launched a political career and advocated for the transfer of Palestinians out of Israel.

In 1990 an Egyptian-born gunman shot him dead in Manhattan. And in 1994 the Israeli government banned Kahane’s political party, Kach, which means “thus,” under anti-terrorism laws.

Now a new generation of activists looking to Kahane for inspiration sees Trump as its ticket to renewed relevance, said Gennadiy Faybyshenko, a 35-year old Kahanist based in Brooklyn who said that he has already seen an uptick in interest. 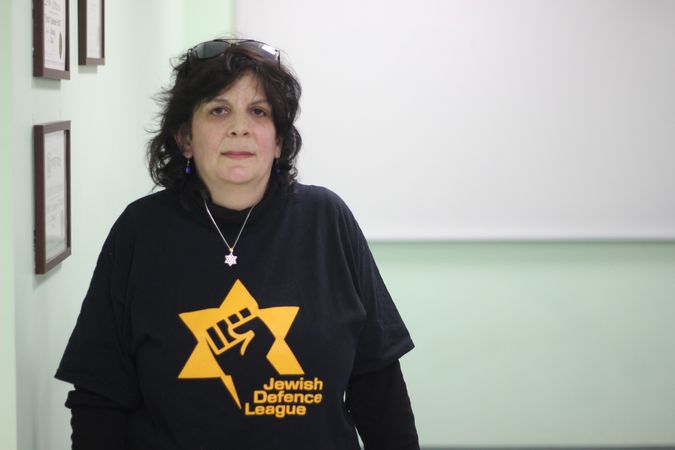 Karen Lichtbraun, a Jewish Defence League organizer in New York City, says her movement has nothing to do with the “alt-right.” Image by Sam Kestenbaum

Activists do not promote violence, they say, but are inspired by Kahane’s message of hard-line Jewish nationalism.

Faybyshenko, who was born in Ukraine and has been involved with Kahanist activities for a decade, said he had been to several Trump election parties throughout Brooklyn, particularly in Midwood and Brighton Beach, Orthodox and Russian enclaves in which Trump had support. In Trump, Faybyshenko said, some hear echoes of Kahane — a nationalist who speaks bluntly about minorities and has no patience for political correctness.

“Donald Trump brings a lot of similar ideology. He speaks in the same language as Kahane,” Faybyshenko said.

For Baron, another Kahanist who lives in Boston and is running Kahanist activities there, Trump’s language offers a way to connect the Kahanist ideology to a younger generation.

“Trump has the slogan ‘America first,’” Baron said. “We have to take the concept of ‘Jew first,’ which means to take care of ourselves first and then worry about other people.”

Baron is organizing Torah study sessions as a way to introduce potential new recruits to Kahanism, highlighting passages that seem to reinforce Kahane’s brand of Jewish nationalism. “We don’t just straight up give them the ideology,” Baron said. “We try to teach them with Torah.”

‘There are some lessons to learn’

The internet has proved to be a successful organizing tool for the younger wave of Kahane-inspired activists. In addition to a Facebook page, where Stern acts as an administrator, dozens of Kahanist Twitter accounts have popped up in recent weeks.

The lines between the “alt-right” and Kahanists can blur, even though the former is the label preferred by contemporary white supremacists who have a history of hating Jews. Both share a common language and irreverence for sacred cows of the left. 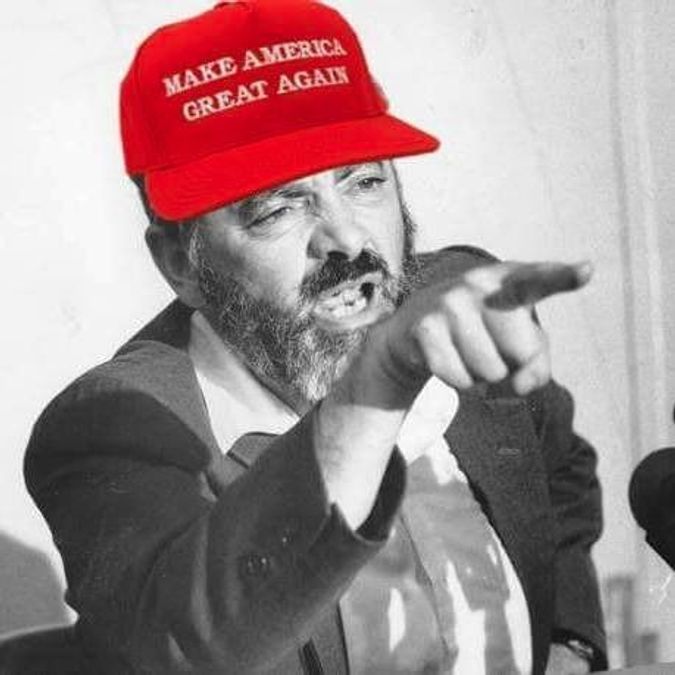 Some see Kahane as a sort of proto-“alt-right” figure himself and an online meme has been circulated of Kahane sporting a red “Make American Great Again” hat.

A Twitter user known as AltRabbi wrote online, “Closest thing jews have had to alt right was kahane.”

AltRabbi is known online as a religious Jew who is sympathetic to the “alt-right.”

“Secular Jews in US are so severly [sic] SJW that they are lost,” he wrote, using an acronym for “social justice warrior,” a pejorative term for activists.

Hundreds of people watch Torah classes organized by Baron, who admires the ways the “alt-right” has harnessed the internet.

“There are some lessons to learn from them in the way they reach out,” he said.

A recent flare-up in Whitefish, Montana, brought the generational divisions of the movement into sharp relief.

Neo-Nazis pledged to carry out an armed march against local Jews in Whitefish, where Spencer lives part time. Spencer did not endorse the march, and quietly distanced himself from the anti-Semitic campaign, but the clear ideological links between the “alt-right” and Nazism were laid bare.

This caused members of the older JDL generation to take a stand.

Meir Weinstein, national director of Canada’s JDL, told the Forward he was more than willing to confront Spencer and neo-Nazis in person.

“That guy’s going to get his head kicked in. He’s a Nazi, this guy’s a Nazi,” Weinstein said of Spencer in a phone interview.

But others, like Stern, are taking a more tempered approach: “We’re not going to work with Nazis — God forbid — but there are factions within the ‘alt-right’ where there is a commonality.” 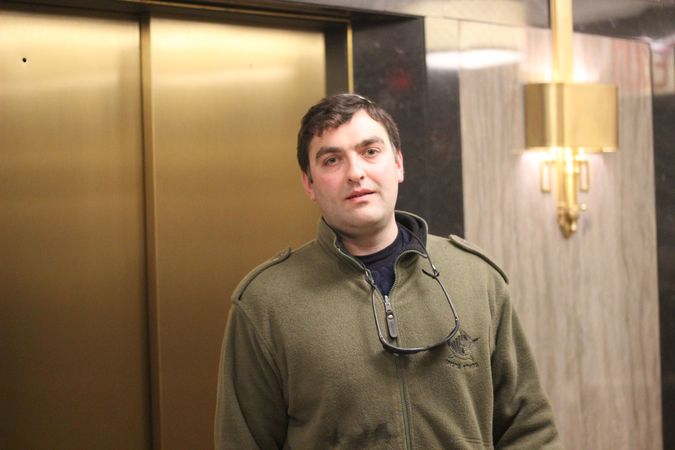 Jonathan Stern, a Kahansit activist, says it is a priority to reach out to members of the “alt-right” who are open to working with Jews.

Stern hopes that Spencer might “denounce all forms of Nazism.” Spencer has complicated views on Jews and Israel and does not call himself a Nazi — preferring instead white “identitarian.” Still, it is unlikely that he will “disavow” any of his neo-Nazi supporters.

In an email to the Forward, Stern asked: “Why shouldn’t we associate ourselves with a charismatic and extremely popular rising figure within the MAGA movement who agrees with us on most issues, but has some problematic followers?”

In Stern’s eyes, “white nationalism is not akin to Nazism,” and white nationalists “do not necessarily hate Jews or non-whites.” Sterns message went on: “They simply want the best for their race. And Jews are white too btw, so why should we object to that?”

“We are looking to make an alliance with people on the right, but that doesn’t include people who you would call Nazis,” Baron said, trying to clarify the Kahanist camp’s position. “We do connect to people who have an American nationalist viewpoint.”

While it is unlikely that Spencer will develop a formal alliance with Kahanist elements, both they and the more established JDL movement are part of a swell of nationalist groups angling for revivals, according to researchers who monitor radical groups.

Faybyshenko has high hopes for his re-energized movement.

“It’s something being reborn,” he said. “Especially after the election results, we now see that people are waking up.”