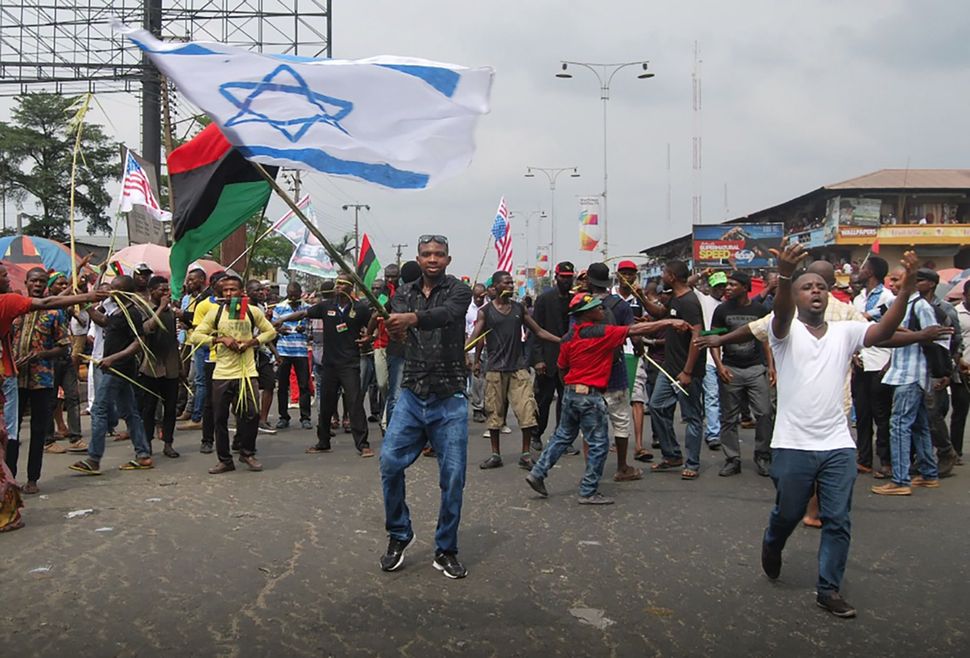 On the weekend of President Trump’s inauguration, hundreds took to the street to march. They blocked traffic, sang songs and danced. In the crowd, scores of them wore yarmulkes and tallitot as they waved Israeli flags.

This was not a scene from a major American city — where supporters and protestors similarly thronged the streets.

It was in the West African nation of Nigeria, where a separatist group known as the Indigenous People of Biafra is heralding Trump as a boon to its nationalist project. They see themselves as descendants of a “Lost Tribe of Israel,” and see Trump as a “pro-Israel” president who will also support their movement to create an independent country of Biafra in the South of the country, among the Igbo people.

“Trump stands for everything we aspire for as a people,” Mazi Onyebuchi, an IPOB activist based in England, wrote in a Facebook message to the Forward. Those aspirations? Self-determination and “restoration of ancient Jewish heritage.”

“They believe that the Igbo are Jews,” said Remy Ilona, a Nigerian graduate student at Florida International University, and the author of “The Igbos And Israel: An Inter-cultural Study of the Oldest and Largest Jewish Diaspora.”

“As the Igbo believe they are Jews,” Ilona said, “that would mean they would support their brothers. And Israel is the state of the Jewish people.”

The IPOB advocate for the creation of an independent state in southeastern Nigeria for the Igbo, one of the country’s largest ethnic groups which also holds a longstanding and widely held identification with the biblical Israelites.

During a bloody war for Biafran independence in the late 1960s, more than 1 million Igbo were killed.

Some Igbo call the conflict an attempted genocide by the Nigerian state, which they compare to the Holocaust. That has only deepened their emotional bond with the Jewish people, and the State of Israel.

Biafran nationalists say their movement has been gaining steam recently and clashes have erupted with security forces in recent months. A leading figure of the movement, Nnamdi Kanu, was arrested by Nigerian secret police last year and is still being held. 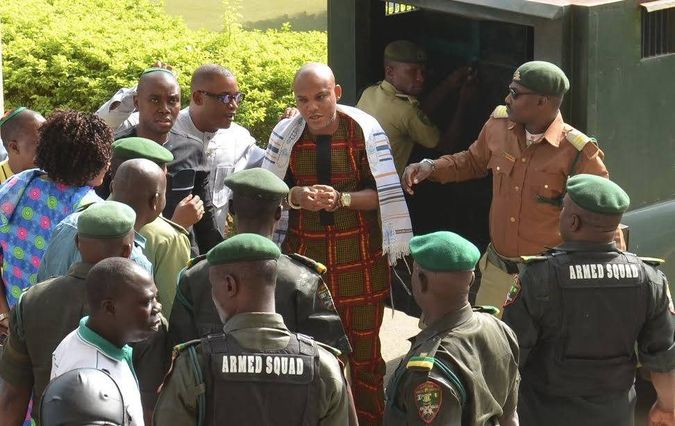 IPOB leader Nnamdi Kanu, hand-cuffed at center, is draped in a prayer shawl as armed state forces surround him.

Reports of clashes between the Biafrans and the state continue.

At the inauguration rally, held in the southern oil hub of Port Harcourt, police arrested 65 demonstrators. And though not verified independently, Biafran activists also claimed police had brutally attacked unarmed demonstrators and even killed several of them.

Amid the unrest, Biafrans hope Trump will come to their side.

Biafrans viewed the former president Barack Obama and Democratic nominee Hillary Clinton as opposed to their movement and overly sympathetic to the Muslim president of Nigeria, Muhammadu Buhari.

Trump’s efforts to curb Muslim immigration, on the other hand, have resonated among some Biafrans who see themselves in opposition to the predominantly Islamic north of Nigeria.

Kanu reportedly handwrote a letter to Trump that was smuggled out of imprisonment. In it, he said, “Your victory has placed a historic and moral burden upon you to liberate enslaved nations in Africa.”

Trump’s promises to forge strong ties with Israel have also resonated with Biafrans, who see themselves as kin to the Jewish people.

Religious practices vary widely among the Igbo. Most are Christian, though many congregations interpolate Hebrew or Jewish rituals into their practice. A smaller group practices rabbinic Judaism and has forged ties with American Jews and Israeli groups to bolster its connection to Judaism and Israel.

Images of the separatist clad in Jewish garb circulate online widely. In one, Kanu wears a tallit and yarmulke, shackled hands held high over his head. IPOB protesters recently rallied outside a Nigerian court on Kanu’s behalf. They dressed in prayer shawls and carried signs written in Hebrew and in English. On one sign was the Sh’ma, the central prayer of Judaism; another was addressed to the president. “Let My People Go,” it read. 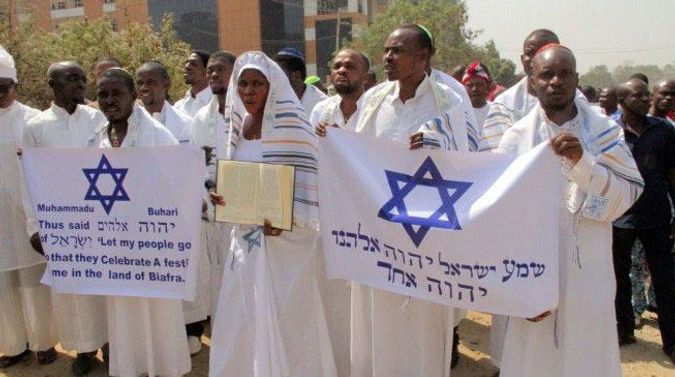 Demonstrators, dressed in Jewish garb, rallied on behalf of a jailed Biafran, carrying signs in Hebrew and English. Image by Facebook

Yahgozie Immanu’el, another Biafran activist living in England, wrote in a message to the Forward that Trump’s signals indicating he might move the United States Embassy to Jerusalem from Tel Aviv were also encouraging to the Biafran separatists — who see themselves as championing their own sort of Zionism of Biafra.

“Hearing Trump re-echo the liberation of Jerusalem — the eternal home of Jewish people,” Immanu’el wrote, was another reason for IPOB’s support.

Immanu’el went on: “The Biafran people are strong supporters of the State of Israel and her rights to exist, so anyone supporting that would obviously get the support of Indigenous People of Biafra.”