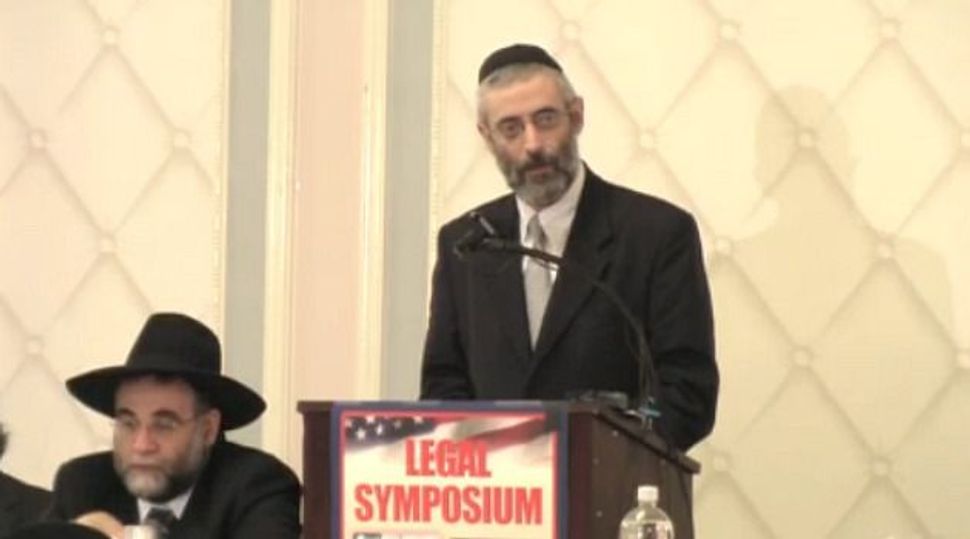 Obligation To Report? Agudath Israel says Orthodox Jews should take allegations of child sex abuse to rabbis before reporting them to police. The position puts it on a collision course with authorities like Brooklyn District Attorney Charles Hynes, who is being scrutinized for his handling of abuse cases. Image by youtube

There’s a bombshell deep in this week’s New York Jewish Week story about a conference on sex abuse in the Jewish community: The powerful Orthodox umbrella group Agudath Israel of America is backing off its opposition to extending the statute of limitations for bringing claims against abusers.

For nearly a decade, advocates for sex abuse victims have fought to have New York state extend its statute of limitations for bringing civil and criminal charges against perpetrators. Today, child victims in New York have only until the age of 23 to bring civil or criminal claims, one of the strictest limits in the country.

Efforts at reform have been stymied repeatedly by the New York State Senate, due in large part to opposition by religious groups, including Agudath Israel. Today, Governor Andrew Cuomo is pushing a new reform bill that would extend the statute of limitations for civil claims by 50 years, end any time limits on criminal charges, and open a one-year window in which suits could be brought by otherwise ineligible victims.

Now, the Jewish Week story reports, Agudath Israel has dropped its opposition. Citing the statements that Agudath Israel’s executive vice president, Rabbi Chaim Dovid Zwiebel, made at the conference, the paper says that the Agudah’s “rabbinic leadership now supports an extension of the statute of limitations in New York State for sexual abuse victims to bring civil and criminal suits,” and that Agudath Israel “had earlier opposed such an extension.”

The Jewish Week also says that Zwiebel said the Agudah supported a period in which “suits could be retroactively brought by people for whom the statute of limitations has already expired.” Though the wording is unclear, the story appears to be claiming that Zwiebel would be okay with a window like the one Cuomo has proposed.

So has there been a sea change in the Agudah’s position? Contacted Thursday morning by the Forward, Zwiebel denied any change, and disputed some of the characterizations of his remarks.

“When I spoke publicly I hadn’t even realized that there was a change in anything,” Zwiebel said.

In fact, Zwiebel said that the organization still opposes a broad opening of the statute of limitations for civil cases. “We have always explained that our concern was for the viability of yeshivas and shuls and summer camps,” Zwiebel said. “We have said that to open up old claims in situations where it could even be that the administration has turned over five times since the incident has occurred… we’re opposed to that.”

Zwiebel said that the Agudah would “be open to any reasonable extension” of the statute for civil claims. He said that an extension allowing child victims to bring lawsuits up to the age of 28 might be reasonable; he said that the 50-year extension proposed by Cuomo was not something his group would support.

Zwiebel also said that the Agudah continues to strongly oppose a window, like the one proposed by Cuomo, in which otherwise ineligible victims could bring suits.

And while it is, perhaps, novel to hear an Agudah leader speaking publicly about what sorts of extensions of the civil limitations might be acceptable, neither of these is a new position, according to Zwiebel.

What may be new, Zwiebel acknowledged, is Agudath Israel’s openness to ending the statute of limitations for criminal cases.

“We would definitely be open to that,” Zwiebel said. “It’s something that I don’t think that we would oppose.”

Zwiebel said that he had not been previously aware that this was a new position, yet he was recently shown an Agudath Israel statement from 2009 opposing lifting limitations on criminal cases.

Yet it’s not clear that even this is new: A 2009 Agudath Israel statement available on an Orthodox news website says that the Agudah would not oppose lifting time limitations on criminal proceedings for abusers.

So has Agudath Israel changed its tune? Perhaps its tone. The tune, however, stays the same.