In Chicago, The Election Aftermath Is Bringing Groups That Once Squabbled Together 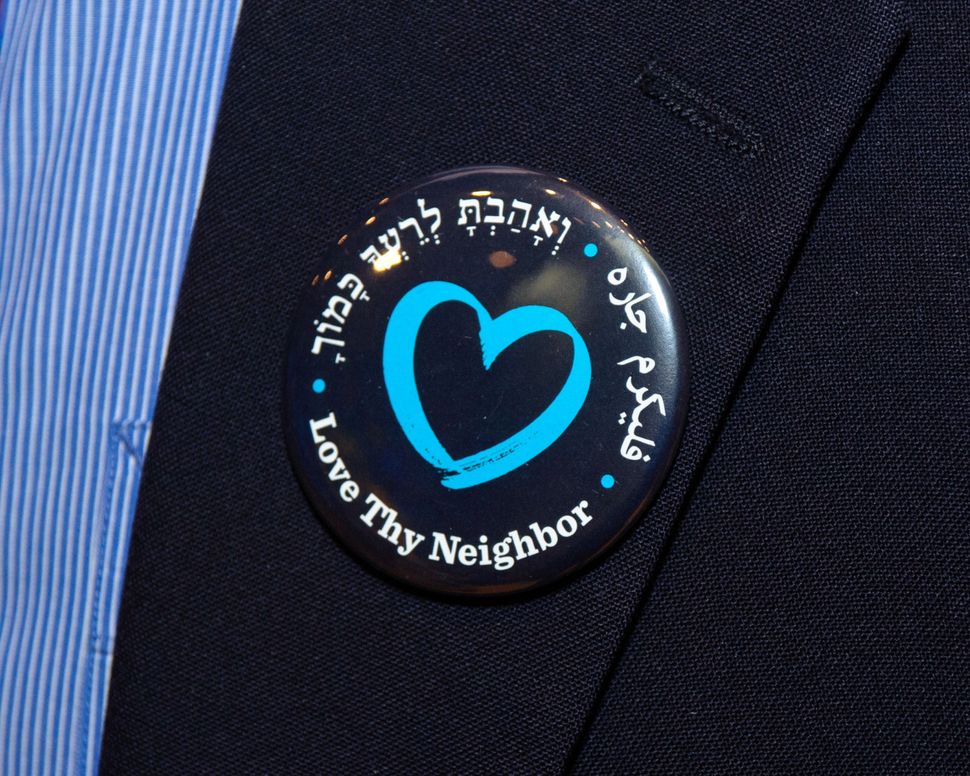 Early last Saturday morning—the Jewish Sabbath—someone smashed the windows of the Chicago Loop Synagogue and drew swastikas on the front of the building. Lee Zoldan, the synagogue’s president, got a phone call with the bad news at 1 a.m.

An hour later, she found herself standing with her husband in the middle of Clark Street surveying the damage and feeling very alone.

On Saturday afternoon, Jenan Mohajir and her family came up to the Loop from Hyde Park bearing flowers and cards. In her professional life, Mohajir is the director of the Interfaith Leadership Institutes, but that Saturday she was there because she is a Muslim and, as she says, “My Islam is full of neighborly love and hope. There is no room for despair.”

By Wednesday afternoon, the swastikas had been cleaned off and the window repaired, but the cards and flowers remained, taped to the windows, and a teddy bear was wedged in the handle of the front door. That was the setting when more than 1,000 people crammed into the sanctuary for an interfaith gathering against hate organized by the Jewish United Fund of Metropolitan Chicago, with speeches and prayers by leaders of the Jewish, Muslim, and Christian communities in Chicago, including Zoldan and Mohajir.

“I can see now we were not alone,” Zoldan told us. “We’ve been inundated with messages of support, flowers, food, and donations. We’ve been working nonstop, and our work is saying ‘Thank you.’”

Relations between Chicago’s Jews and their neighbors, particularly among the Muslim community and on the black south side, have not always been great. The litany of grievances is long: redlining, white flight, Louis Farrakhan, the PLO, and on and on and on.

But nobody mentioned those on Wednesday. The Reverend Otis Moss III, pastor at the Trinity United Church of Christ in the Washington Heights neighborhood, instead spoke of how his father had marched with Rabbi Abraham Joshua Heschel to Selma, when Heschel famously said he’d prayed with his feet. “Blacks and Jews are connected,” he said, “because we know your pain, the broken windows, the broken lives, branded by people with their eyes glazed by hatred.”

That always made sense to me. It was back in elementary school that I first learned about slavery and civil rights, and that the old spirituals referenced the same Bible stories I learned about in Hebrew school. It was a greater mystery to me where all the hatred came from.

Every speaker had a different metaphor, a different way of talking about how we are all too much alike to be fighting. Moss spoke about jazz, a mixture of sounds, he said, “that taught America about democracy before America knew what democracy was.” Pastor Chris Harris of Bright Star Church in Bronzeville talked about how kippot were called “Freedom Caps” during the Civil Rights era. Steven Nasatir, president of the JUF, cited FBI statistics about the rise of hate crimes against Jews and Muslims in 2015 (the most recent year such statistics are available). Mohajir quoted a line from Rumi: “A wound is a place where light enters you.” It reminded me a bit of Leonard Cohen’s line: “There is a crack in everything. That’s how the light gets in.” Rabbi Michael Siegel of Anshe Emet Synagogue spoke of light, too: “Where is the light to dispel darkness?” he asked. “The light is the joy that comes in acts of kindness.”

There was only one apology, from Bishop Sally Dyck of the United Methodist Church. But then again, maybe she, as the representative of a white church, was the only one who was in a position to offer one. “Christianity has been too silent, especially mainline Protestantism, about attacks on our Jewish brothers and sisters,” she said.

In the end, though, it didn’t feel like apologies were necessary. Each community had its plagues—a synagogue had been vandalized, the president had banned Muslims from entering the United States, African-American Chicagoans suffer from crime and poverty in disproportionate numbers—but in the past few weeks and months, in the most beautiful consequence of the current state of America, people have been standing up for other groups, not just their own. They have marched in the street shouting “Black lives matter,” and gone to the airport to shout “No ban, no wall,” and now they were here at the synagogue, singing “Oseh shalom bimromav,” “make peace, make peace, for all of us.”

Coincidentally, around the same time as the gathering, the news broke that the Chicago police had arrested the perpetrator. A 31-year-old man named Stuart Wright was arrested on Tuesday night and charged on Wednesday morning, with a hate crime and felony criminal damage to property.

In Chicago, The Election Aftermath Is Bringing Groups That Once Squabbled Together