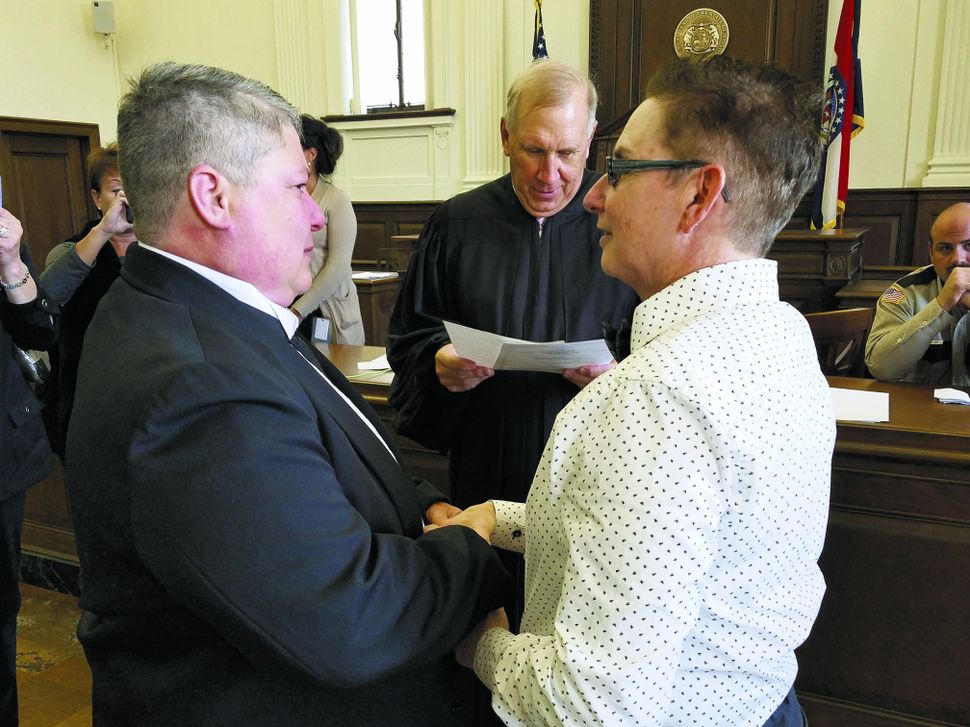 No Time Like Now: Chris Whitaker (left) and Elaine Brune got married in a civil ceremony in St. Louis in early December rather than wait for a year-and-a-half, as they had planned. Image by Courtesy Elaine Brune

On the night of November 8, Karen Goldberg sat in her home in Cleveland, watching the 2016 election coverage. As votes trickled in and patches of red swept across the electoral map, Goldberg was forced to accept that Donald Trump was going to become the next president of the United States.

Goldberg cried. She tried to sleep, but kept waking in starts of disbelief. Then she e-mailed her rabbi and told him that she wanted to get married as soon as possible.

Goldberg, 39, and her partner, Sarah Kapor, 35 — the two, who are both physicians, declined to use their real names to keep their personal lives private from their patients — have been together for almost three years. They had vague plans for a wedding in the near future, possibly September: an intimate synagogue ceremony and a larger party for family and friends at a local restaurant. But the election — and the fear its result lodged in their hearts — galvanized them into action.

In mid-December, with support from Rabbi Robert Nosanchuk of Cleveland’s Anshe Chesed Fairmount Temple, Goldberg and Kapor were wed in a traditional ceremony under a chuppah, just weeks before Trump’s inauguration. A few close friends and family members watched as Goldberg and Kapor signed a ketubah, or Jewish marriage contract, and drank from Kiddush cups that Goldberg’s children had made at their Jewish day school. It was a low-key event, but it was infused with great purpose.

“You hear talk about overturning Roe v. Wade,” Goldberg explained, referring to the landmark Supreme Court decision that recognized women’s constitutional right to an abortion. “So I don’t necessarily think that it’s out of left field to say that perhaps, somehow, they will take this decision about gay marriage back to the level of the states.”

Ohio, the couple’s home state, had banned same-sex marriage until June 2015, when the Supreme Court ruling known as Obergefell v. Hodges legalized gay marriage across the United States. How long, they wondered, would those rights now continue to exist?

“If God forbid something happens to one of us, the other one is [now] protected,” Goldberg explained.

Goldberg and Kapor are not alone. Catalyzed by the notorious unpredictability of president Trump, who told CNN in 2015 that he was “for traditional marriage,” LGBTQ Jews across the country are upending their marriage plans to secure quick civil recognition of their unions. Some are rushing to the courthouse months before the date of their Jewish wedding; others, in their haste, are forgoing a Jewish ceremony altogether.

No data are available from county clerks that track the number of gay marriages taking place over time. But Lisa Hardaway, communications director at Lamda Legal, an organization that works to protect the civil rights of LGBTQ people and people with HIV, told the Forward, “We can say anecdotally that we’ve seen an increase in callers asking if the validity of their marriages would be challenged and asking if they should hurry to marry.”

Nosanchuk said that many members of his synagogue were left feeling vulnerable by the caustic presidential race and the rise to power of a deeply divisive candidate.

On election night, “Even before the election had been called, I heard from two different couples,” including Goldberg and Kapor,” he said. “[It] has to do with the real politics of it — wondering whether or not the institution of marriage will remain as open as it is now.”

Chief among the concerns of many LGBTQ Americans is the possibility that Trump will appoint Supreme Court justices who are keen to chip away at Obergefell. During his election campaign, Trump said that he would “strongly consider” doing so. Since then, he has claimed that he is “fine” with the ruling. But the famously mercurial Trump is hard to read on the issue. Members of his Cabinet have been much clearer and consistent. Vice President Mike Pence, for example, has said that same-sex unions lead to “societal collapse.”

Trump’s recent nomination of the staunchly conservative jurist Neil Gorsuch, whose views on Obergefell are unknown, to assume the vacant seat on the Supreme Court has only heightened the insecurity felt by many.

Rachel Tiven, CEO of Lambda Legal, said that fears about gay rights under Trump are “not inappropriate.” But she also said, emphatically, “Marriage equality is not in jeopardy.”

The Supreme Court rarely rescinds its own rulings, Tiven explained, adding, “It is particularly difficult to undo a Supreme Court precedent that was greeted with cheers in the streets, the White House lit up in rainbow colors, and a broad feeling that this was a great day for America.”

This was not the case with Roe, she noted, “or with lots and lots and lots of other Supreme Court decisions that are still around. I think that having a little appreciation for that context is really, really important.”

Nevertheless, conservative officials who oppose the Supreme Court ruling may now feel emboldened to subvert it. Just three days after Trump’s inauguration, the Texas Supreme Court agreed to give second consideration to a case that sought to block same-sex spouses of city employees from receiving benefits.

Fearing this type of assault on same-sex marriage rights, St. Louis retiree Elaine Brune, 61, and her partner, Chris Whitaker, 49, decided before the election that they would get married in the event of a Trump win. “We were going to [do] it at our own pace,” Brune said. “I’m sure that we would have gotten married within the next year and a half or so.”

After the election, that seemed like too long to wait. On a blustery Friday in early December, Whitaker and Brune slipped into dress shirts, fastened their neckties and headed to the courthouse for a civil ceremony. Though she is Jewish, Brune is not sure if she would have opted for a religious ceremony even if she’d felt able to devote more time to planning her wedding. In the wake of the election, having a Jewish wedding was not a priority. The couple’s union, though joyful, was propelled by a pragmatic desire to protect their relationship. 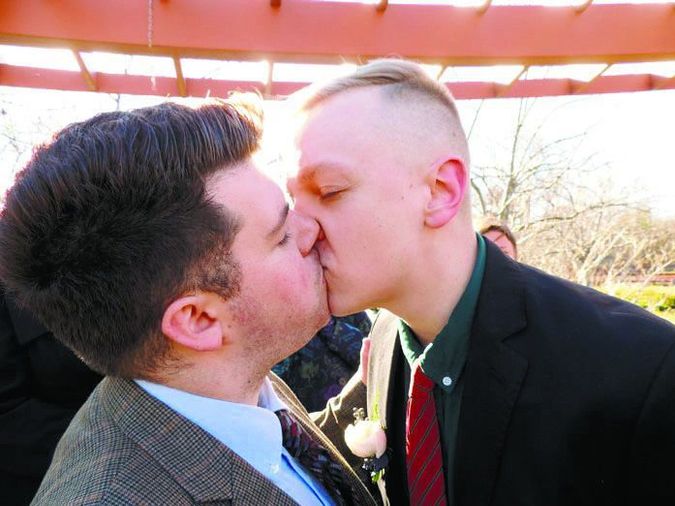 For Aaron and Jhonathan Rupchand-Kokotek that feeling came with an added level of urgency: Jhonathan Rupchand-Kokotek, a native of Suriname who came to America as a teenager with his family, is an undocumented immigrant. In 2016,Rupchand-Kokotek was granted relief from deportation by then-President Obama’s Deferred Action For Childhood Arrivals policy, which was instituted in 2012. But during the campaign, Trump vowed to abolish DACA, and his intentions now remain unclear.

Unlike Whitaker and Brune, the Rupchand-Kokoteks didn’t want to forgo a religious ceremony as part of a formal wedding that all their friends could attend. But given Jhonathan Rupchand-Kokotek’s legal status, they felt as though time was at a premium. The couple, who hyphenated their respective names after their rush to wed, decided to bifurcate the usually unified civil and religious steps into matrimony. They still look forward to having a wedding party and an interfaith ceremony — Aaron, 28, is Jewish and Jhonathan, 29, is a Methodist — in New York City in the spring of 2018. But meanwhile, on December 30, 2016, they were married civilly in a little garden beside the Manhattan city clerk’s office.

The couple still managed to infuse their civil ceremony with a touch of Jewish flavor. Near its conclusion, Aaron Rupchand-Kokoteks’s father stood in front of the couple and placed one of his hands on his son’s head and the other on his new son-in-law’s. Then, both parents recited the Birkat ha-Kohanim, an ancient priestly blessing that calls upon God to bestow grace, protection and peace.

A group of tourists stopped to watch the ceremony, snapping pictures and cheering when it was over.

“We’ve been together for so many years,” Jhonathan Rupchand-Kokoteks said. “We love each other. But the reason why we got married, it was somewhat political: Aaron wanted to make sure that I’m protected.” With legal recognition of their union in hand, they hope that, as a married couple, any rollback of DACA will not affect them.

“It was meant to be a statement,” Aaron Rupchand-Kokotek said. “I wanted to make a point of saying, ‘Well, this is something we have to do.’”

Similarly, Reuven Schechter, 24, and Kevin Knarr, 25, of Austin, Texas, were in the midst of planning a wedding for 2018 when Trump’s election prompted them to make it a two-step process. On the second day of Hanukkah, during a trip to visit family in St. Louis, Schechter and Knarr were civilly married in the Missouri Botanical Gardens, surrounded by a cluster of trees stripped bare by winter winds. An acquaintance acted as the officiant, and a handful of family members looked on.

It’s only next year, after the requisite planning, that they plan to share their vows before some 85 friends and family in a ceremony that will, they say, contain a “mix” of religious elements: a ketubah to honor Schechter’s Jewish heritage, a reading of the New Testament to honor Knarr’s Christian one. They are both quite keen on getting married under a chuppah — in part because they are fans of an iconic scene from “Gilmore Girls,” but also because Jewish tradition has become an important part of their lives together.

“Kevin might not be Jewish, but he cares a lot about Judaism, and about me, and having the Jewish elements be a part of [the wedding],” Schechter said.

“We are worried,” he said, when asked why they chose to have the separate civil ceremony early. “Not necessarily that the Supreme Court decision will be overturned, but that civil protections will be stripped, that there will be an unfavorable environment toward same-gender couples in the future, especially in red states.”

Getting married, Schechter explained, “is about being safe.”