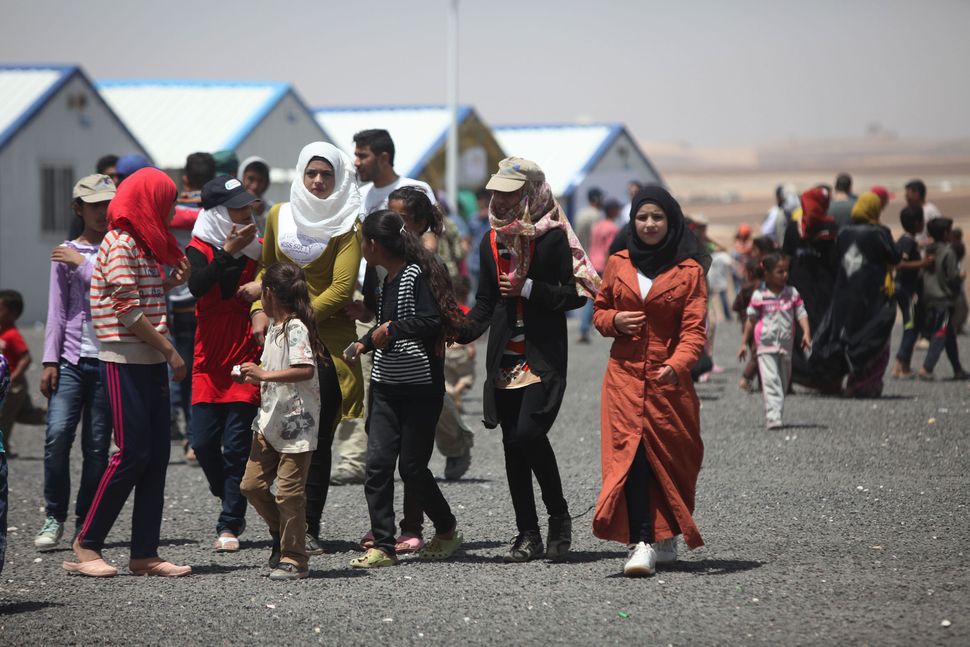 That is the situation Chicago synagogues are dealing with after having volunteered to sponsor them—about 35 people in all—since President Donald Trump issued his executive order banning citizens of seven Muslim majority countries from entering the United States.

Despite a February 3 court order temporarily lifting the ban, and an appellate court’s upholding of that order, the sponsoring synagogues have yet to learn the fate of the families they were looking forward to welcoming.

“The unpredictability of things has been a challenge to manage,” said Jessica Schaffer, the director of HIAS Chicago (which is affiliated with, but not a branch of, the federal agency HIAS).

“Some people sold everything they had, even in refugee camps, to be able to afford plane tickets,” said Jims Porter, a spokesman for RefugeeOne, another local refugee resettlement group. “You come to the airport and get told to go home, what does that mean for a refugee who has already left home, without safety and food? It’s chilling, a frightful thought.”

In the week following the ban HIAS Chicago welcomed two women from the Democratic Republic of Congo who had been living in a refugee camp in Zambia since 1999. This is not an exceptionally long wait, Schaffer explained; refugees have to be officially designated by the United Nations High Commission on Refugees, wait to be assigned to a country, and then, if they’re coming to the US, undergo a lengthy vetting process that can take between 18 months and 2 years. There is an immense backlog on all these processes. In total, less than 1% of all refugees are resettled in a third country; the remaining 99% either become integrated into the local community, or they return to their homelands once it’s safe.

Temple Sholom, a synagogue in the Lakeview neighborhood, had been working with HIAS Chicago since last November to sponsor a refugee family, scheduled to arrive in the late winter or early spring. (HIAS Chicago receives a three-month travel window from the government and then one or two weeks’ notice before the final date.) The process is a lengthy one, said Jo Ann Potashnick, one of two co-chairs of the synagogue’s volunteer effort to help the family resettle. HIAS Chicago finds apartments for the refugees to live in, but synagogue members are responsible for raising money to furnish it. They also provide food and other basic necessities and help the refugees acclimate to life in the US.

“We had to raise money,” Potashnick said, “a minimum of $7,000 per family. We’re over that now. We set up a registry at Target and let people buy stuff. We heard rumors about the ban, and then it happened, but we keep getting everything ready in the hopes that when all this stops, we will be ready.”

HIAS Chicago is contracted to provide aid to the refugees for 90 days and expects the same of cosponsors, but, said Schaffer, “often relationships persist beyond the three-month mark. We were the first faces they saw in this country, so we’re the faces they trust.”

Am Shalom, a synagogue in north suburban Glencoe, made national news in late January when it welcomed one of the last Syrian families to enter the US before the ban. The family, said Steven Lowenstein, Am Shalom’s rabbi, is doing well.

“They know they have family that were shut out from getting here, at the airport,” Lowenstein said. “I don’t know if they fully comprehend, but they certainly know how lucky they are.”

The Jewish community has responded by offering an abundance gift cards, toys, and donation. “We have more volunteers than we could handle if we adopted an entire football team,” Lowenstein joked. “It makes me very proud to be Jewish.”

HIAS Chicago and RefugeeOne have also seen a tremendous outpouring of interest in helping refugees resettle. “The executive order inspired a lot of people to act and get involved,” Schaffer said. “It’s so wonderful, but I don’t know if we have enough families to match with every congregation who wants to cosponsor.”

HIAS Chicago’s yearly quota is 60 people. In theory there should be enough families for all congregations interested in cosponsoring one, but no one knows yet what lies ahead.

Potashnick remains “conservatively hopeful” that some day soon, she and the rest of the welcoming committee from Temple Sholom will be at O’Hare waiting to welcome a family. “It’s like how my parents came from Germany,” she said. “There’s a deep connection between the Jewish community and people who have had to leave.”