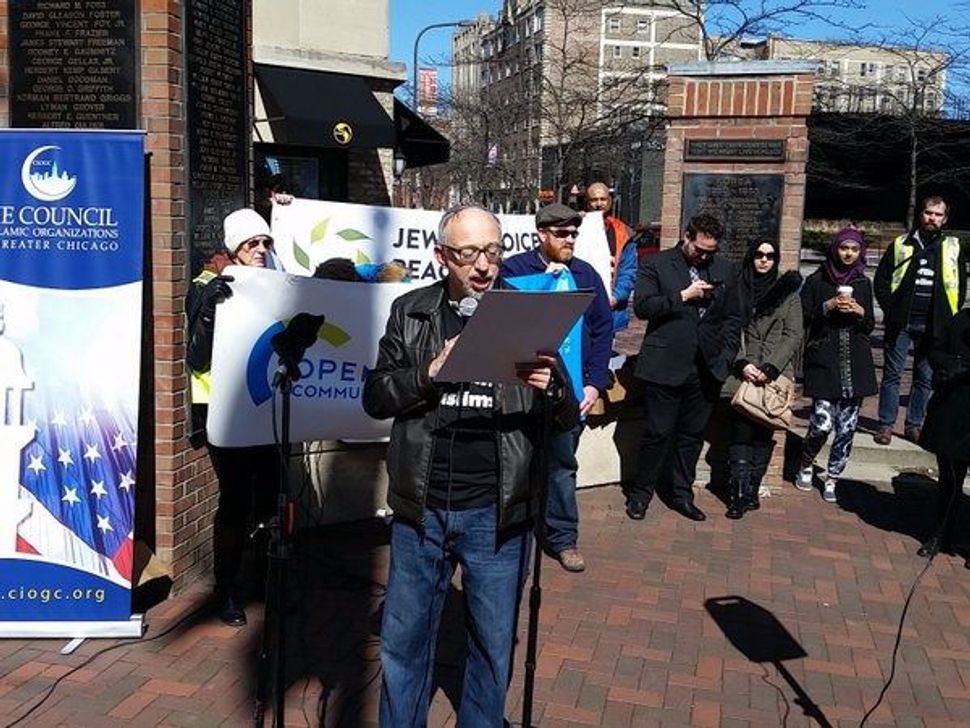 Rabbi Michael Davis at a Jewish Voice for Peace pro-Palestinian rally in 2016.

Rabbi Michael Davis was born in the United Kingdom and immigrated to Israel with his family as a child to become a settler. He grew up in a West Bank settlement, where he attended an Orthodox yeshiva and later served in the Israel Defense Forces. But as a young man, Davis began to question the settler ideology — what he has called its “Messianic purity of thought” — and eventually left the movement. After the 1995 assassination of Prime Minister Yitzhak Rabin and the rise of Benjamin Netanyahu to Israel’s leadership, Davis left Israel altogether for the United States, where he became a Reform rabbi and cantor in Chicago and an activist. He is one of the founding members of the rabbinic council of Jewish Voice for Peace and participates in many interfaith activities with Chicago’s Muslim community. He spoke the with the Forward’s Aimee Levitt about the increase in Jewish-Muslim unity over the past few months.

AL: What accounts for this increase in Muslims and Jews working together?

Davis: It’s a silver lining, a blessing in this time. Jews really get it in a visceral way, what it’s like to be an immigrant. Most of them are just a generation or two removed. I hear members of my congregation saying, if there’s a Muslim registry, we want to be on it. There’s been an identification of Muslims in their time of need. It’s a real first in the Jewish community. It’s valuable, both a spiritual need and political stance. It’s a beautiful combination of spiritual and political.

The second part is a bit more political. A lot of established groups have had trouble meeting Muslims. I was at a Muslim-Jewish rally in Evanston during the [2014] Gaza War. There were no Muslims there. This was because, according to our friends in the Muslim community, they have a sense that the free speech is controlled when they’re with the Jewish community. They can’t speak freely about Israel.

Jewish Voice for Peace does not impose that rule. We won’t impose preconditions. They’re responding to that. We form a place where Jews and Muslims can come together. It’s not because of our political stance. We’ve built relationships and done the work of founding relationships based on respect. Jewish people and organizations are eager to tap those relationships. At the Loop Synagogue rally February 8, Muslims showed up. Many had never done interfaith before, but there was a feeling of trust. We need that everywhere. It’s not activism in attacking someone, it’s activism in celebration of forming connections.

It sounds like this work started before the election.

The bonds were growing before [the election]. But certainly the election and the new administration have had an impact on this. Jews are more aware of being a minority than ever before, so this identification with the Muslim condition is visceral and intensified by what we’ve been going through. Also the anti-Semitic attacks. But we were building relationships before the election. This is the crisis has brought it to the surface, but we’ve been doing the work for years now. We’re happy those relationships are in place.

How do you talk about Israel?

As a rabbi, I come at this with a spirit of free speech. Every Jew has a place at the table. People have the right to speak authentically, even if it’s hard to listen to. In that spirit, I want to create a space for Muslims to speak, too. As long as it’s not hateful, it comes from a place of authentic feeling, I would challenge ourselves to stretch ourselves. If we can handle our own pain, we can handle others’ too. The best way to approach it is with a spirit of curiosity: I want to know where you are with this issue. That’s what at stake, not making peace in Middle East. You care, and I care, so I want to know why you are. If there’s a nonjudgmental openness, then we’re sharing in a deep way.