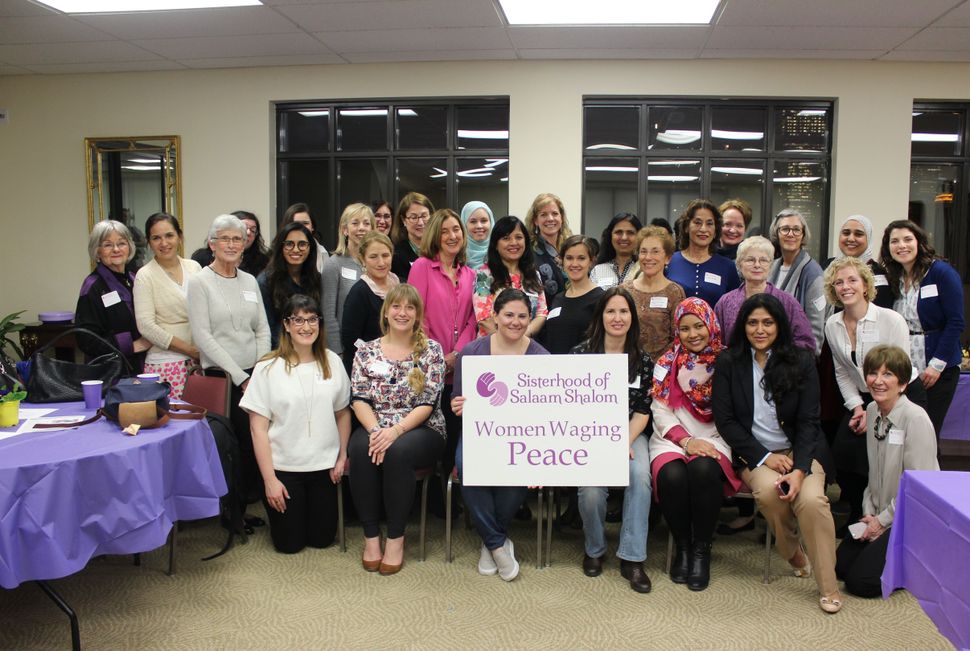 Together: Members of Sisterhood of Salaam-Shalom were among the groups that met to oppose anti-Semitism and Islamophobia.

Post-election outreach between Jewish and Muslim groups in Chicago reached a new level of depth and intensity over a varied series of meetings last week.

Though many of these groups began connecting with each prior to the election of Donald Trump as president, post-election developments drove and dominated the recent political, educational, and social events, which have deepened the two communities’ bonds and their commitment to work together against anti-Semitism and Islamophobia.

All the events were planned before the vandalism of Chesed Shel Emeth Cemetery in University City, Missouri, just outside St. Louis, but took place in its wake. Speakers referred constantly both to the cemetery desecration and to the fundraising efforts led by Muslims to repair it.

“One of the fault lines of the divide-and-conquer tactic is the supposed Jewish-Muslim rift,” said Rami Nashashibi, executive director of the Inner City Muslim Action Network, at an interfaith gathering last Friday organized by the Reverend Jesse Jackson and hosted by KAM Isaiah-Israel in the Hyde Park neighborhood. “I’ve been seeing a deepening of a sense of accountability. There will be no acceptance of anti-Semitism in the Muslim-American community, and the same for Islamophobia in the Jewish community.”

Nashashibi was one of many leaders in the Muslim and Jewish, and also Christian communities who vowed to stand together and demand that President Trump take action against the current spate of hate crimes against both Jews and Muslims.

Other synagogues and organizations are taking more immediate action: they are inviting one another into their sacred and private spaces to talk.

Makom Shalom, a synagogue on the north side, hosted an interfaith Shabbat dinner last Friday featuring a Muslim speaker, Karen Danielson. Makom Shalom’s rabbi, Michael Davis, has been working with the Muslim community for more than a year, appearing on panels and visiting local mosques, but this is the first time a Muslim leader has come to the synagogue.

“Karen has never been to a synagogue for a Shabbat dinner,” said Davis. “We’ve come to a point where we’ve built a lot of trust. When I asked her, she said yes.”

In the past, the specter of Israeli-Palestinian relations may have discouraged conversation; now, Jewish- and Muslim-Americans are realizing that they have more in common than they thought.

“Jews are feeling an affinity to Muslims because of the anti-Muslim steps taken by the administration, the travel ban and so on,” Davis explained. Many of his congregants have told him that if the government institutes a Muslim registry, they are prepared to add their names to it.

Muslims feel a similar affinity. America’s Jewish and Muslim populations are now approximately the same size. Many Muslims, however, are more recent immigrants and see Jews as a model of how to survive in America.

“They want to learn how to preserve their faith as a minority religion,” said Rabbi Andrea London of Beth Emet Synagogue in Evanston. “The Jewish community has done that successfully. They’ve set up institutions and teach their children, but they have also become part of the dominant society.”

The weekend immediately after the election, London and some of her congregants at Beth Emet participated in a solidarity rally in Evanston. “People were feeling vulnerable, and wanted to come together as a community to reaffirm values,” she explained. “We talked about things we should do.”

One of those things was an educational event, which was held a week ago last Sunday at the synagogue to teach Jews about Islam; not only about the basic religious principles, but also about the pressures on Muslim-Americans, the current geopolitical situation that led to the rise of extremist groups like ISIS, and how Muslims are grappling with it. The event featured two Muslim speakers: Tahera Ahmad, a chaplain and director of interfaith engagement at Northwestern, and Azam Nizamuddin, a professor of theology at Loyola University Chicago.

“Muslims are equated with terrorists,” said London. “That’s why Trump put the ban on immigrants from seven primarily Muslim countries. But most [terrorism] victims are Muslim.”

The conversation at a potluck dinner of the Sisterhood of Salaam-Shalom on Wednesday evening stayed more in the personal realm. A week earlier, the group had hosted a nationwide unity vigil, but this was a chance for members to come together socially. The Sisterhood was founded seven years ago by Sheryl Olitsky, a Jew, and Atiya Aftab, a Muslim, under the premise that it’s hard to hate someone you know.

The group brings together Jewish and Muslim women in groups of between 12 and 20 who meet roughly every six weeks in one another’s homes. It now claims 4,000 members nationwide, and since an article about the organization’s national conference appeared in The New York Times in December, it has been inundated with requests from women who want to join. The majority of the approximately 60 Chicago women who gathered on Wednesday were still waiting to be assigned a chapter.

One of the cardinal rules of SOSS is that the Israeli-Palestinian conflict is not to be discussed until groups have built up a certain level of trust; Olitsky estimates that this usually takes a year and a half. And so at the potluck, after an introductory speech from Olitsky, the conversation mostly stayed in the getting-to-know-you realm, about neighborhoods and religious customs and the difficulties of raising chickens in a city. When politics was mentioned, it was strictly of the American variety. Still, most of the women were pleased to be able to have an opportunity to meet women from the other faith.

“It’s the theory of change,” Olitsky explained. “If two people are different, the strength of their relationship determines how they view each other’s communities.”

These are still early days, but something fundamentally different is taking place