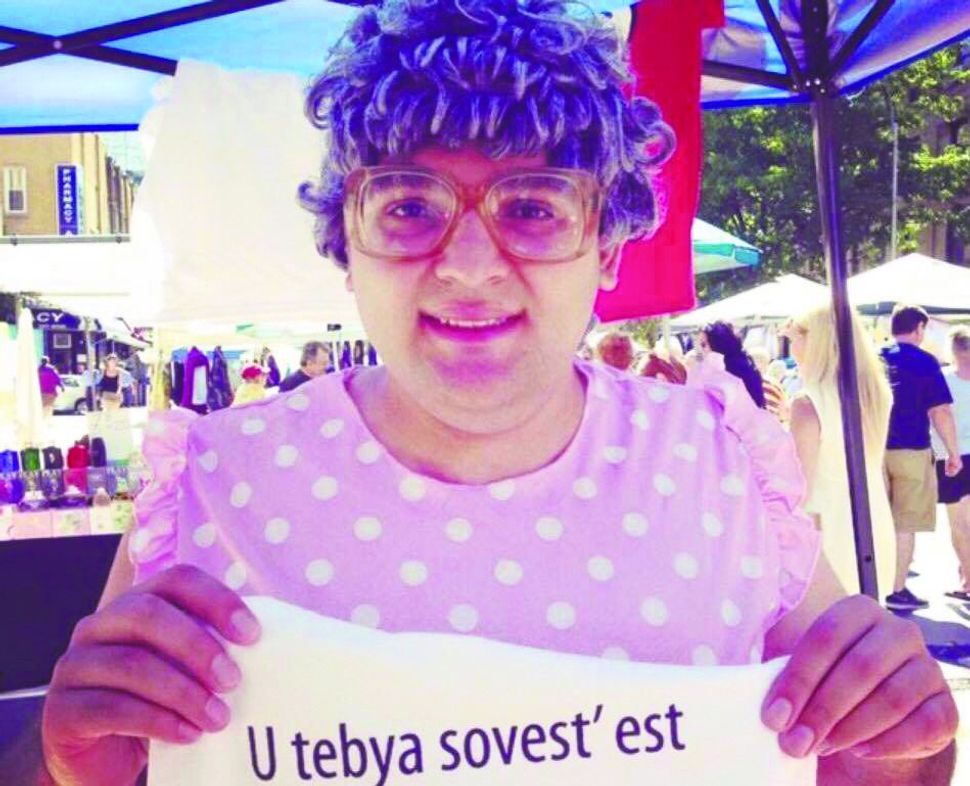 Gary Cherkassky’s grandmother, who is 80 years old, isn’t on Facebook or Instagram. She doesn’t even have a smartphone.

But if you are a Russian Jew, chances are you’ve probably heard what she has to say somewhere on the internet.

That’s because she is the inspiration behind Baba Fira (“baba” is short for babushka, which means “grandmother” in Russian), the Russian Jewish grandmother from Brooklyn’s Brighton Beach made famous by her 28-year-old grandson, who impersonates her in short online videos. Take, for instance, one recent clip.

“Garik, why are you naked?!” is the first thing Baba Fira says to her grandson when he comes to visit her.

(In Russian, telling people that they are naked is a way to point out that they aren’t dressed warmly enough for the weather.)

“You obviously want to catch a cold!” she replies. “Do you want to eat something? Let me feed you.”

“No, I already had some sushi with friends. I need to run to the bathroom for a second,” he says.

“Okay, go ahead,” Grandma says. But the next minute, she is speaking to him through the bathroom door, just to make sure he really isn’t hungry: “Garik, maybe you want something sweet to eat?”

“Please, Grandma, move away from the door, I’m sh—ting in here,” the grandson says. I won’t tell you what happens from there — but it involves a roll of toilet paper with Hillary Clinton’s portrait on it that Grandma accidentally got for free somewhere. Let’s just note that the video, which is only one minute long, got 120 comments and about 9,000 views — and that’s just on Instagram.

“You can’t make this stuff up,” says Cherkassky (aka Gary Spielberg, aka Garik Suharik), who created and plays Baba Fira. Cherkassky, who is a filmmaker and actor, notes: “Grandmas can get away with anything. They have no filter. They’ll say whatever they want to say.”

What makes it so funny is that Cherkassky acts out the grandma’s role perfectly: He is the bearded grandma with a gray wig and big glasses, and he speaks Russian exactly as she speaks. Actually, it’s not just how she speaks, it’s how all Russian Jewish grandmothers speak. She is instantly recognizable to thousands of Russian Jewish grandchildren. Every sentence that comes out of Baba Fira’s mouth is real — it’s something that Cherkassky’s grandmothers actually said at some point. To get ideas for his videos, Cherkassky actually writes down or remembers things he hears when he visits his grandparents in Brighton Beach.

“I can pinpoint every single phrase in the videos somewhere in my life,” he says. According to Cherkassky’s mother, Alona Guz (who claims she is actually the No. 1 clown in the family), Cherkassky was always good at laughing.

“Even when he fell down in childhood, he laughed instead of crying,” she said.

As a teenager, Cherkassky entertained his friends by prank-calling people with Russian names from the phonebook and pretending to be their friend: “We’d say things like, ‘We went to banya together the other day. You forgot?’” (A banya is a traditional Russian bathhouse and sauna.)

When he finished film school at Brooklyn College he noticed that videos like “S—t Puerto Ricans Would Say” or “S—t New Yorkers Would Say” became popular online. “So [I thought] you know what? Maybe I should do ‘S—t Russian Grandmas Would Say,’” Cherkassky said.

As soon as he posted the clip online, it went wild.

“I posted it at 8 or 9 p.m., and I started getting text messages; my phone just started going crazy,” he remembered. ”I woke up to 15,000 views overnight. It was insane. I felt like I won the Lotto.”

At first though, his grandmother wasn’t thrilled about it.

“I would show her the videos and she would laugh, but later she would call my dad and complain that I was imitating her,” Cherkassky admitted.

Nowadays she has come to terms with it and is even proud of her grandson’s acclaim, Cherkassky says. (Cherkassky’s grandmother. Yosefa Cherkassky. doesn’t want to be interviewed, he said.)

Cherkassky named his character Baba Fira after his great-grandmother, who passed away when he was 2. (In case you are wondering about the real Baba Fira, she was a doctor in the Soviet army during World War II and her real name was Esfir, or Fira for short; Cherkassky doesn’t even know her last name. His only memory of his great-grandmother is when she sat him down to watch a Russian hypnotist on TV to hypnotize him into potty training.)

It should be said that Cherkassky’s videos aren’t limited to Baba Fira; he pokes fun at the other members of his family, too: his parents, who speak in a funny mix of Russian and English that only a bilingual person can get, and Yana – a Russian Jewish girl who seems like she might be his sister. Cherkassky portrays each character. When he is Grandma he wears big glasses; when he is Mom he has bleached curly hair, and when he is Yana he puts on a longhaired wig. He also pretends to be himself in the past: a Russian Jewish New Yorker in his 20s who is still living with his parents and gets interrogated about when he will finally get a girlfriend.

Some of the videos are about what it’s like to be a Russian Jew in America. “Dad, what are we going to do tomorrow for Yom Kippur?” Cherkassky asks in one skit. “We won’t eat. We won’t drink. We’ll forget our phones at home, and we’ll dress up nicely and take a walk on the boardwalk, so everyone can see how nice we look and what a good son I have,” the father replies. “Then, we’ll go eat something.”

In another video, the father and the son get into an argument over a Christmas tree, or as it’s called in Russian, a yolka. (In Russian, this evergreen tree is not named after the Christian holiday.)

“Dad, are we going to get a Christmas tree for Hanukkah?” the son asks in English. “No way!” the father replies, mostly in Russian. “We’ll buy it after Christmas. Christmas trees are very expensive now!”

In case you didn’t get that, in the former Soviet Union, Christmas trees are actually just called fir trees, and they are decorated for the New Year, not for December 25. So, many Russian Jewish families in America get their New Year tree after the Christian holiday passes — sometimes by picking one up for free on the street when people throw out theirs.

“Paying an extra $10 for a Christmas tree? Hell, no!“ Cherkassky concludes at the end of the clip. “Have a great Hanukkah, Christmas, and for the real Russians — Novy God [the New Year] is coming up as well!”

Cherkassky became so popular thanks to his videos that he’s been invited to perform comedy all over the world in places where Russian Jews live. He’s been to Canada, Australia and Israel.

People now know Baba Fira in countries “where I didn’t even realize Russian Jews existed,” he said. “I did something amazing without even realizing it. What I’ve done united kids with being okay to be Russian Jewish and being okay with having crazy parents and grandparents.” He also performs at private parties, bar mitzvahs and weddings — impersonating the members of other families.

“I sit with the family and they tell me everything about the family members and close friends, and I memorize it,” he said, explaining the process behind his stand-up comedy performances.

And although Cherkassky is originally from Ukraine — he came to America when he was 1.5 years old — he’s never performed in or even traveled back to the country of his birth. “There aren’t many Jews left there,” he said.